This is not a build thread since I've had the tank more than 14 years. During that time it has been my main display for more than 12.

For a couple of years I upgraded to a 180, I knew I was going to be moving but I got a good deal on a used tank so I set it up for a while before moving. The good deal was really not great for a display as it was more scratched up than this old tank. That being said the only reason it's not my main display now is I broke it when I moved. I just moved the tank too much by myself. Fortunately I kept this tank.

The 2016 move was to the country. No LFS, very few local reefers. It's a long story but I haven't been happy here at all. While I've long been out priced from the real estate market I grew up in, I am hoping to move to a less rural area in 2021. We'll see. This is the big reason why (other than cost) I have not upgraded this tank. I don't want to have something I can't move.

That being said I absolutely love the look of my display tank. Somehow I squeeze more and more out of it. I need more fish desperately but other than that I am really happy with the tank. I do however love to get constructive criticism, so feel free to leave some. I have other tanks, I do other things but this tank is a DISPLAY tank. The back glass is scraped even if I have to break corals to do so. There are no frag racks and any frag plugs are carefully hidden. I have expensive little frags, but the tank is highlighted by giant soft corals. In 2016 when I moved there was a 6 week time between moving into this house and moving out of my old house. During that time I kept all my livestock in my parents bathroom. It wasn't pretty and over that time I lost all my sps and many LPS and many great fish. This is how the tank became soft coral dominated but I have always loved softies. You will still find tons of pom pom xenia in my tank all these years later. A long time ago I had a terrible crash which cost me my beautiful fairy wrasse collection (flame, lineatus, labouti, rhomboid, ect) I've never really recovered from that fish wise. 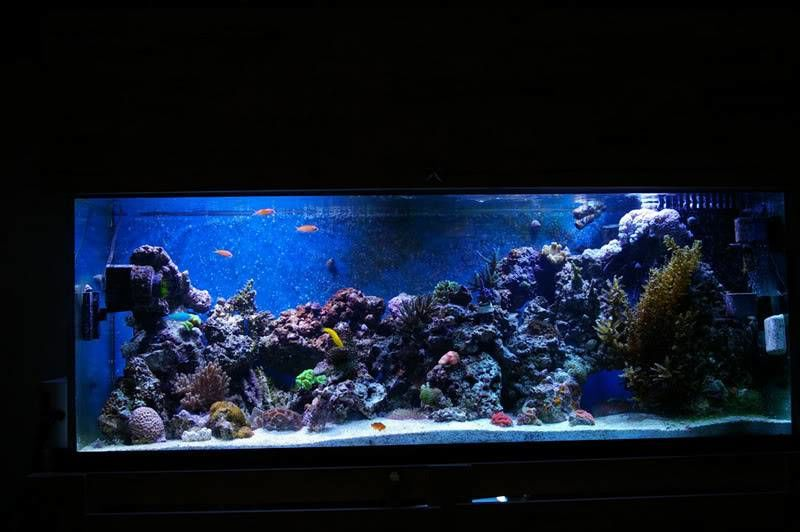 Most of the rock is still the same from 2006 although there have been some switcheroos. I still have my naked clown, and some red discosoma mushrooms somehow are always still around from 2006 but otherwise pretty much everything has changed. PC + MH to all T5 to LED + MH to LED only to different led's + T5.

Old vortechs have come and gone, jeabo pumps have lasted surprisingly long, I have one Tunze from when they redesigned the powerheads that is still going. Oh the return pump hasn't changed. The eheim 1262 *knock on wood* has been going 24/7 since September 2006 except the day I moved and one power failure where I could not get my generator going.

So the plan is just to squeeze more out of this tank until I do get somewhere where I'd feel comfortable setting up a "forever" tank. I'd say a 10 year tank but this tank is already on it's 14th year so if I only keep my next main tank 10 years that will be a downgrade. I'm still no closer to knowing what type of corals I want to focus on long term so I'm probably a mixed reefer for life.

Wow, that is a beautiful reef! I'm gonna feature this one on the Homepage.
Useful links:

Absolutely beautiful, you really have an eye for the rock work and coral placement!
Eric Sutter
@eelrivercoral

Humblefish said:
Wow, that is a beautiful reef! I'm gonna feature this one on the Homepage.
Click to expand...

Your tank is absolutely beautiful!! Photos like this make me want to go all softcorals.

I have a Eheim 1262 I bought used like 7 years ago or something and it’s still in operation.

I also like the blue background peaking through in the last image with reflections. Never done blue before but that looks great!

Here are some new 2021 pictures 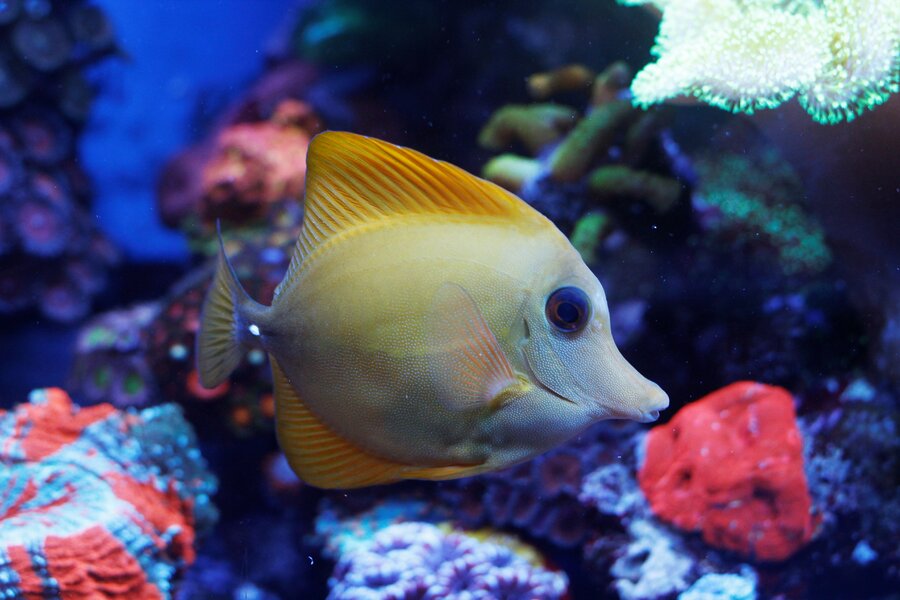 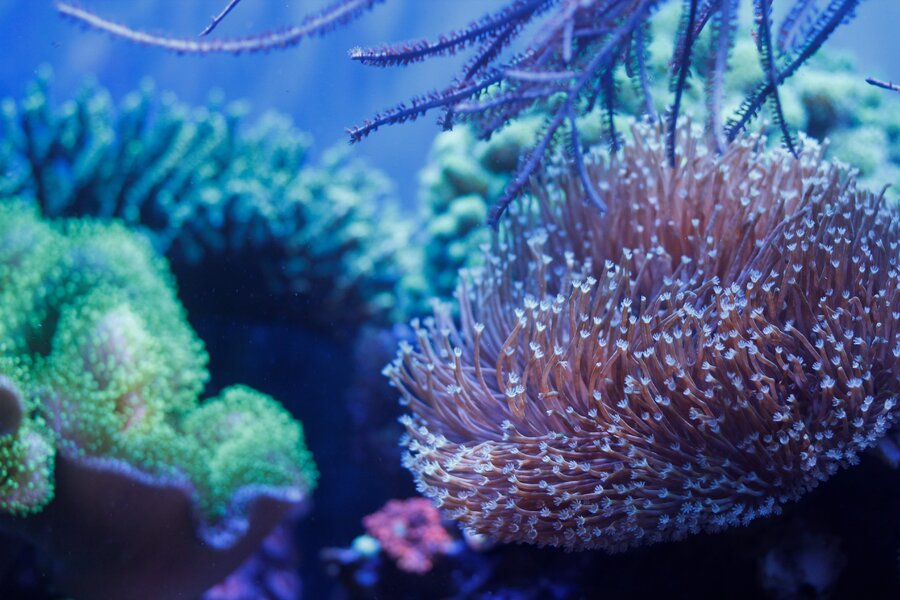 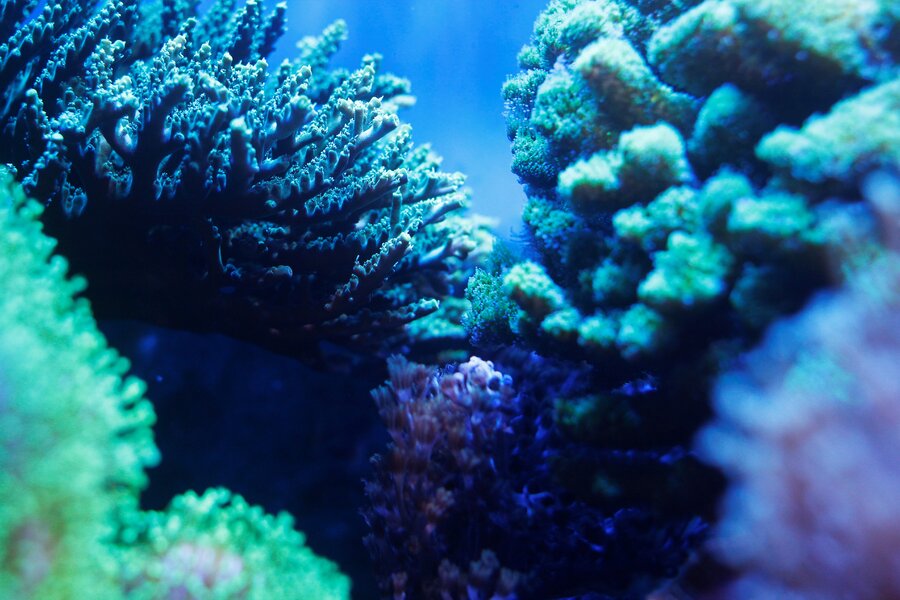 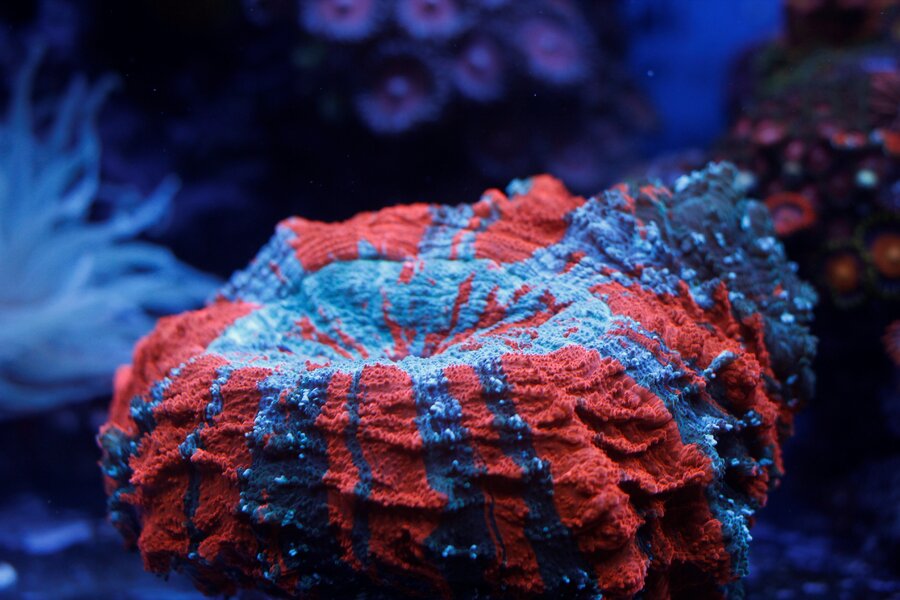 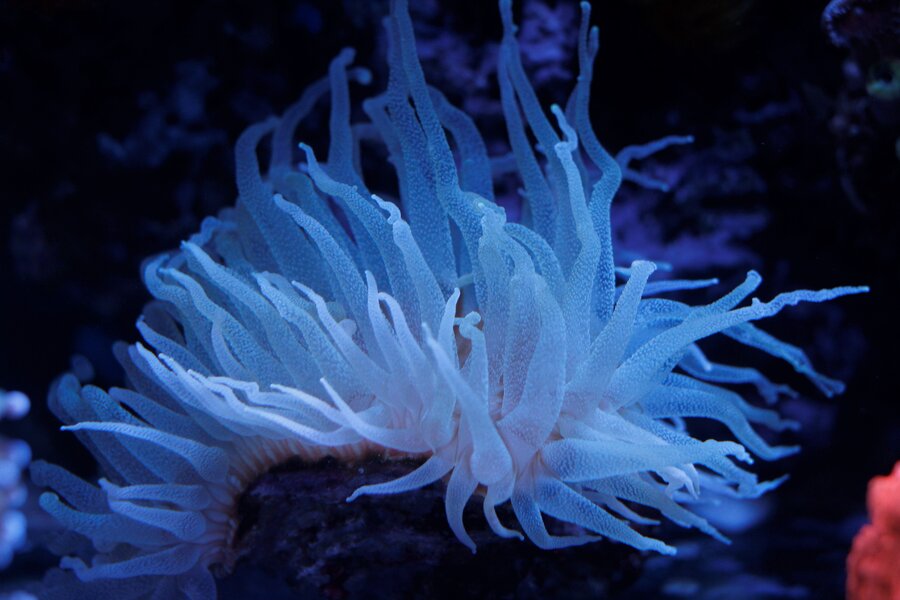 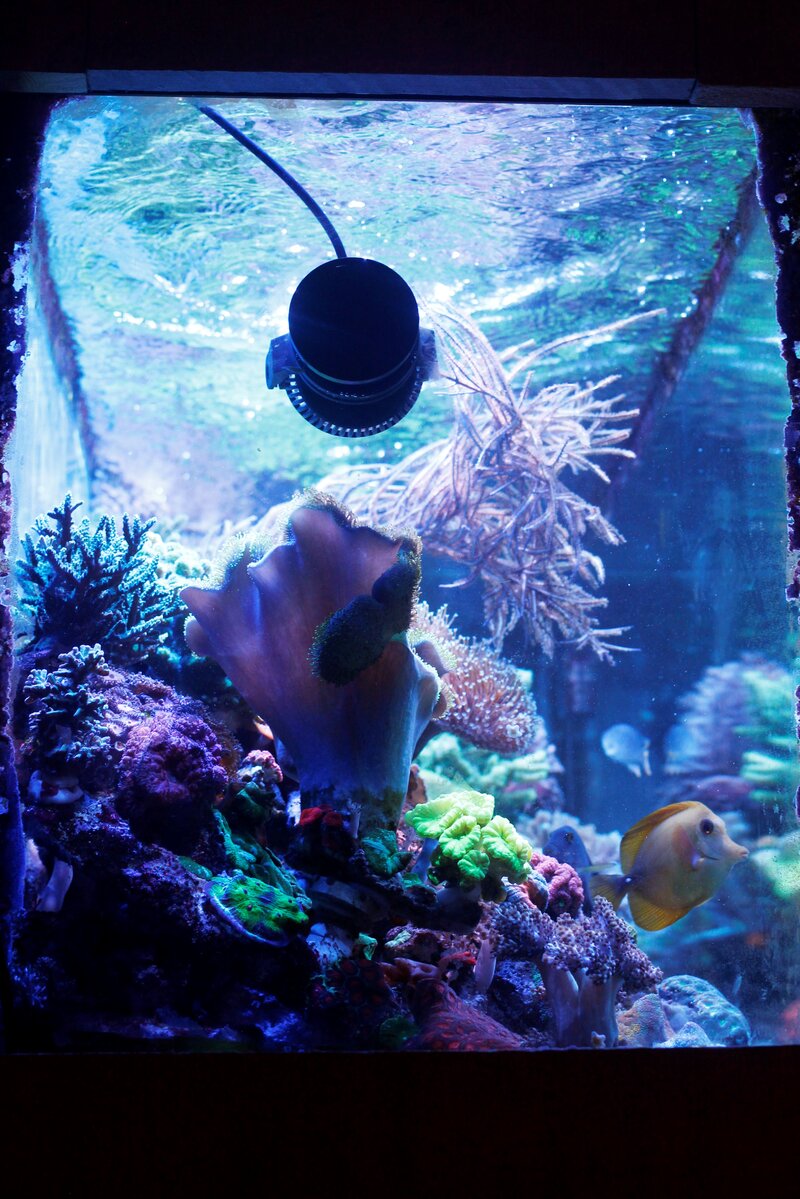 Man, y'all are giving me so many new build threads to feature on the Homepage.

This one goes up tomorrow!

Edit: Apparently I already did this a few days ago!
Last edited: Jan 3, 2021
Useful links:

Is this a goni or an alveopora? It looks amazing! I love how long the PE can get 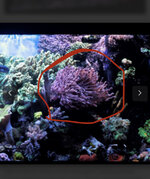 Max_nano said:
Is this a goni or an alveopora? It looks amazing! I love how long the PE can getView attachment 12057
Click to expand...

It's a goni. It's always had nice pe, I have moved it a few times but started as a small frag and has grown great over the past couple of years. The skeleton is probably close to a softball size. 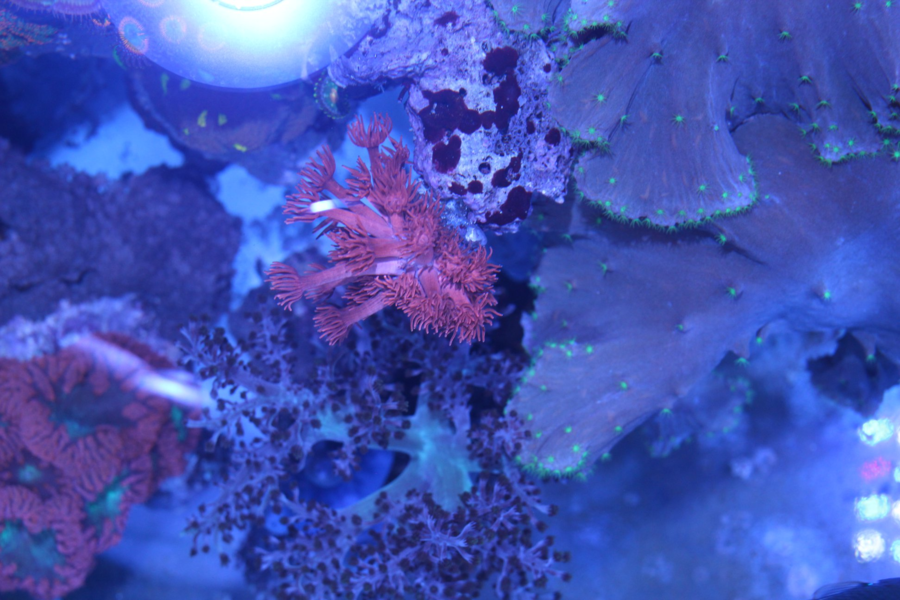 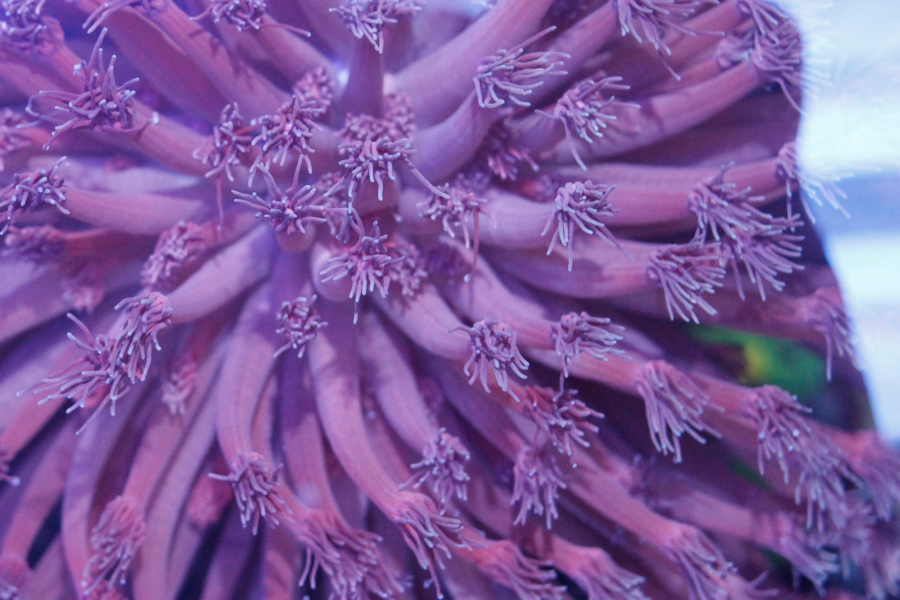 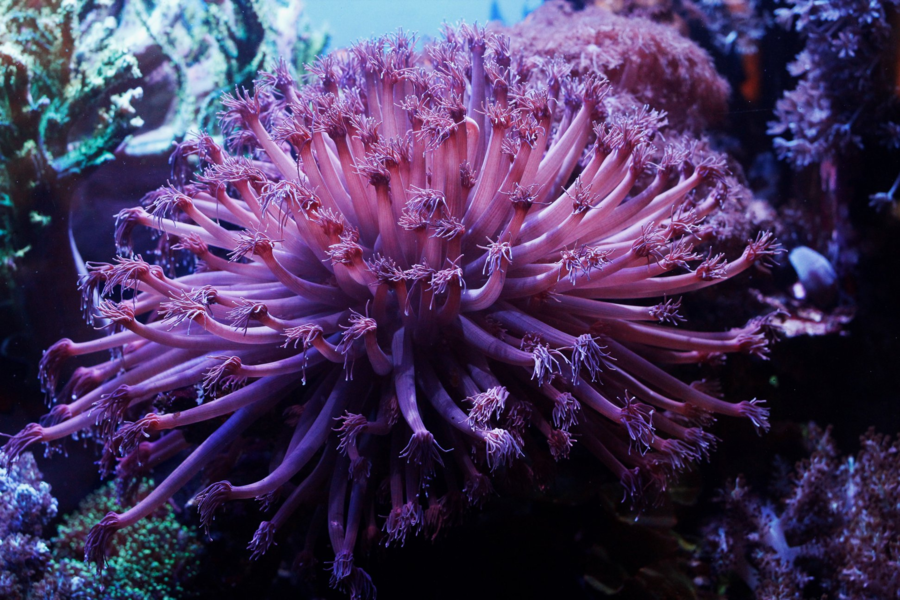 Lovely tank, I have a huge admiration for softie reefs. I really think they are overlooked by most reefers.

January update :
While I did post a few pics earlier this month, I have been regularly posting photos and a video once a month since some time in 2017. I took the video footage yesterday and will edit it some time in the next day or 2. When I follow other people's reef tanks I love to see the progress and for myself it makes it very easy to go back and see my own progress.

Here are the pics. I will probably do some cutting soon. I say this every month, but obviously with each passing month more corals touch. Touching and stinging are the #1 cause of death in my tank. #2 is small frags being knocked away. I don't have that many tiny frags, I generally keep things in my frag tank unless I can't wait to get them in until they are a decent size but with the tank so packed if it gets knocked off after being glued I may have to just leave it vs tearing everything out.

I am really happy with how the tank looks other than I need more fish. I do clearly need a bigger tank, if I could just transport the entire tank, encrusted corals and all into a 180g in the same spot that would be great. Just spread everything a few inches further. Since that is impossible I will continue to make things work in here and hope that each passing day brings me closer to a newer dream or at least semi dream tank. This tank is very narrow but I still love looking from the side. 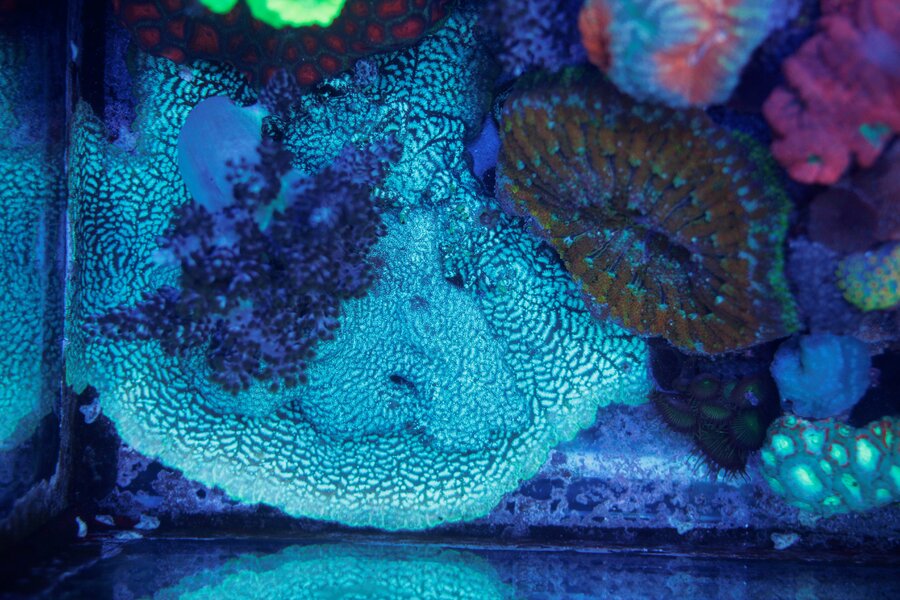 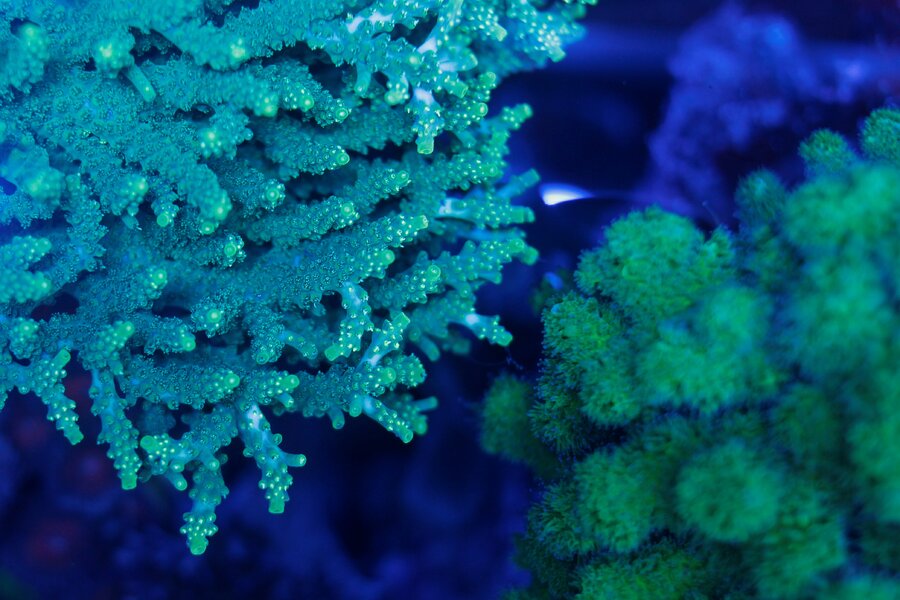 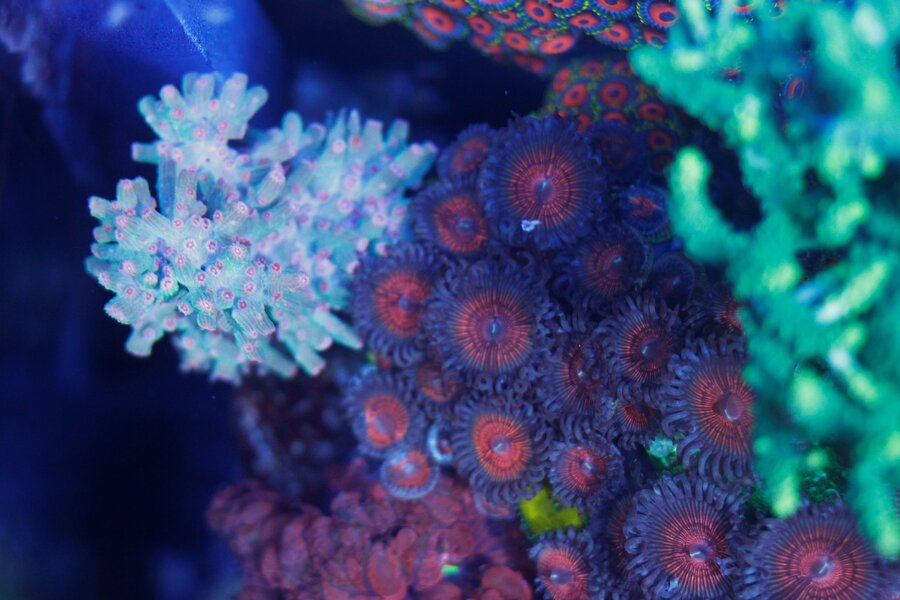 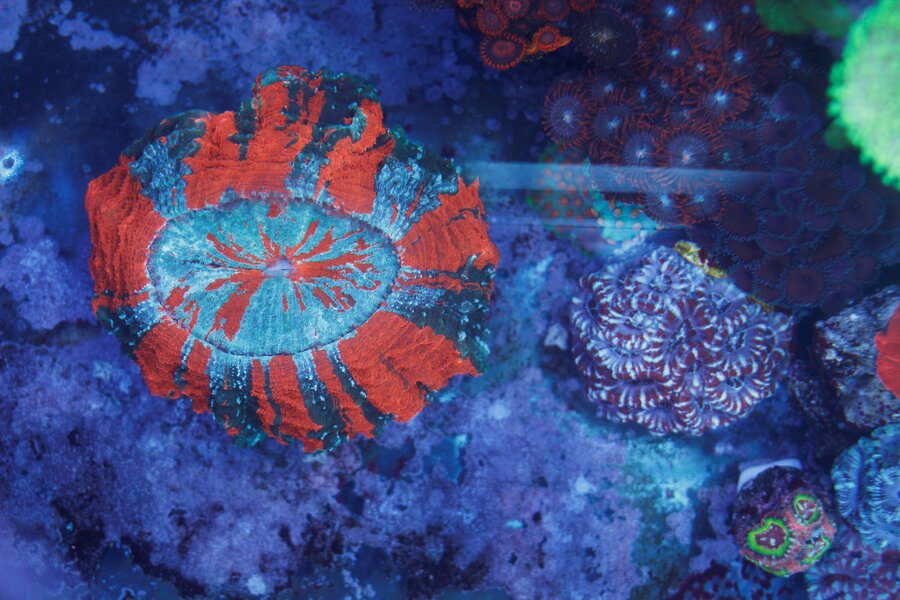 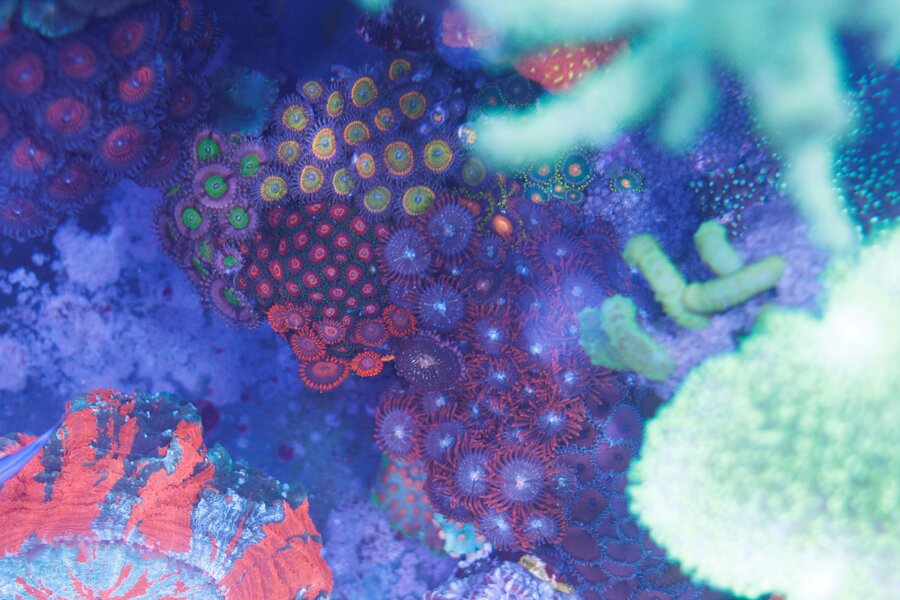 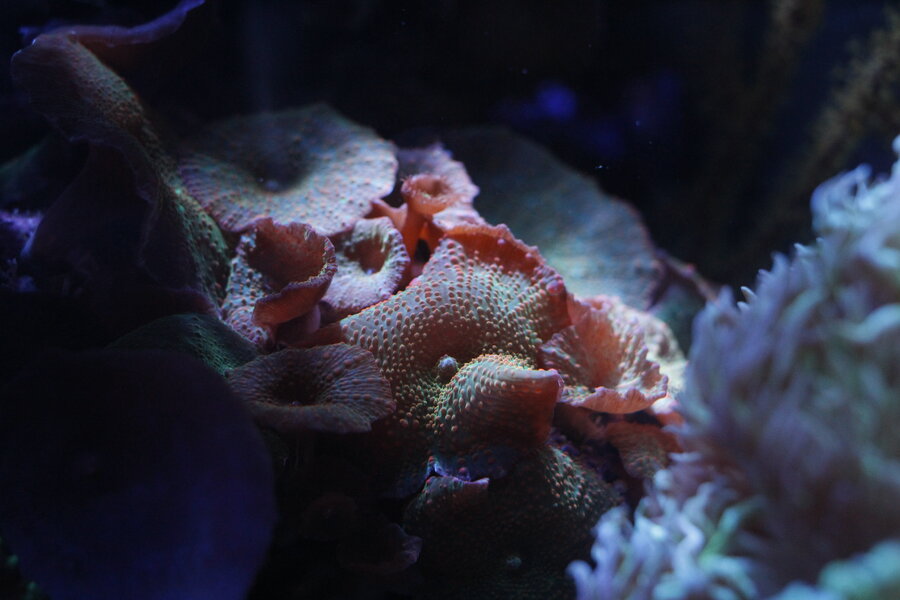 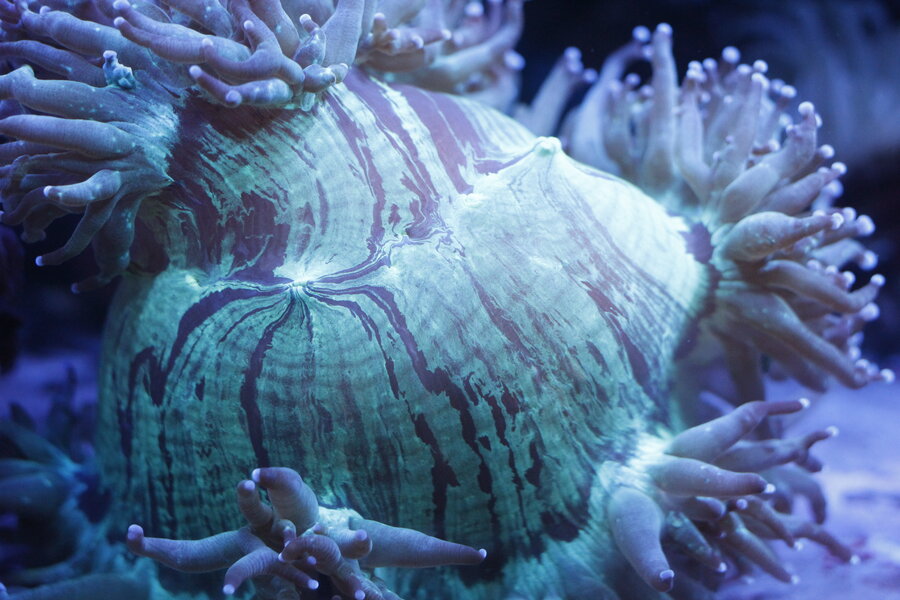 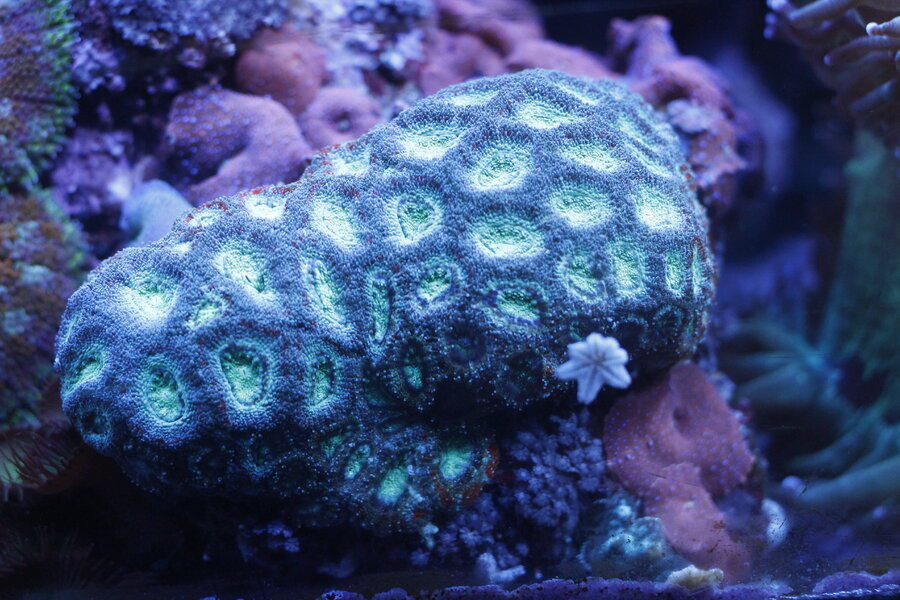 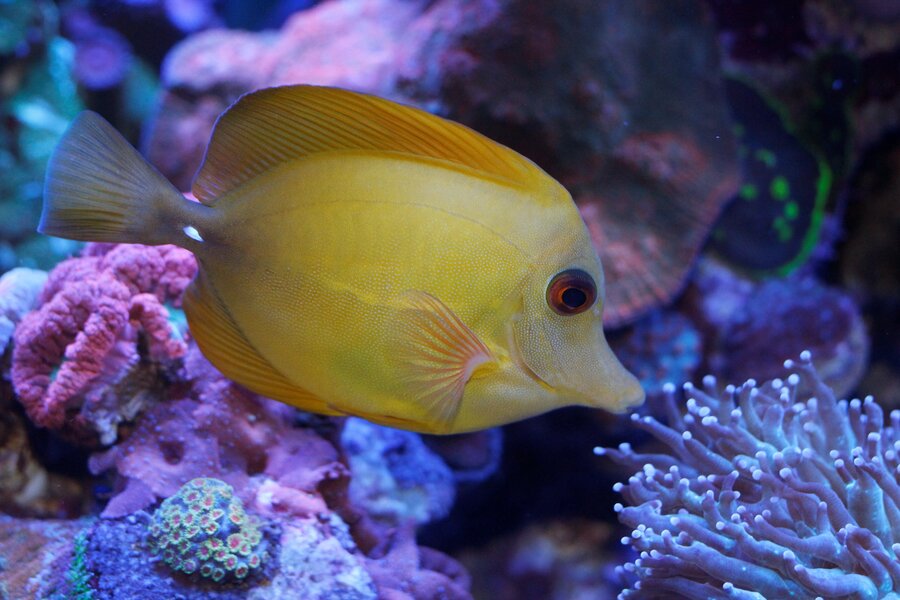 I will have to tell my yellow scopas tang that a lot more people are probably going have them in their tanks in the near future... 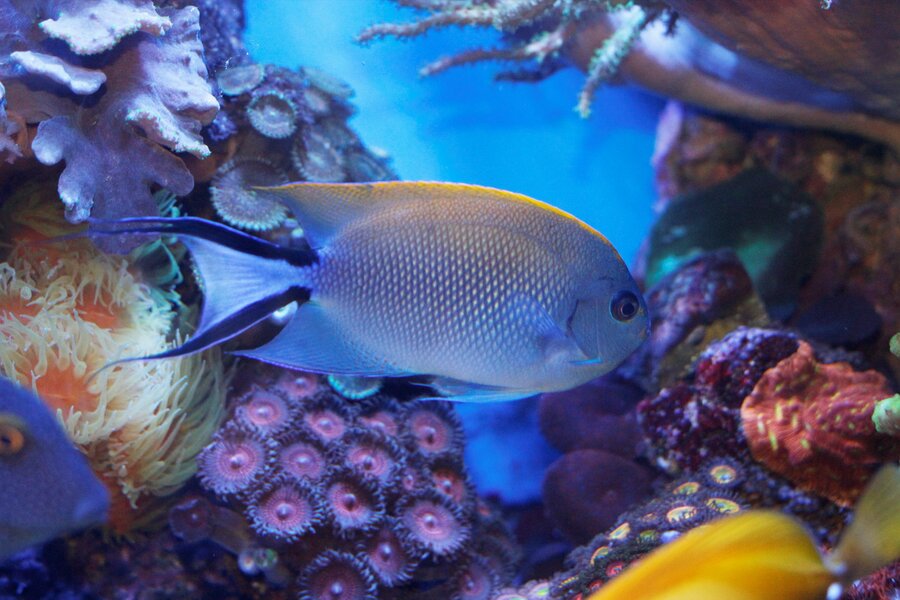 I first noted the streamers 2 years ago on this female angel.

Lots of pictures because this is a new thread, but starting next month it will be 6-10 a month

Here is the angel 2 years ago 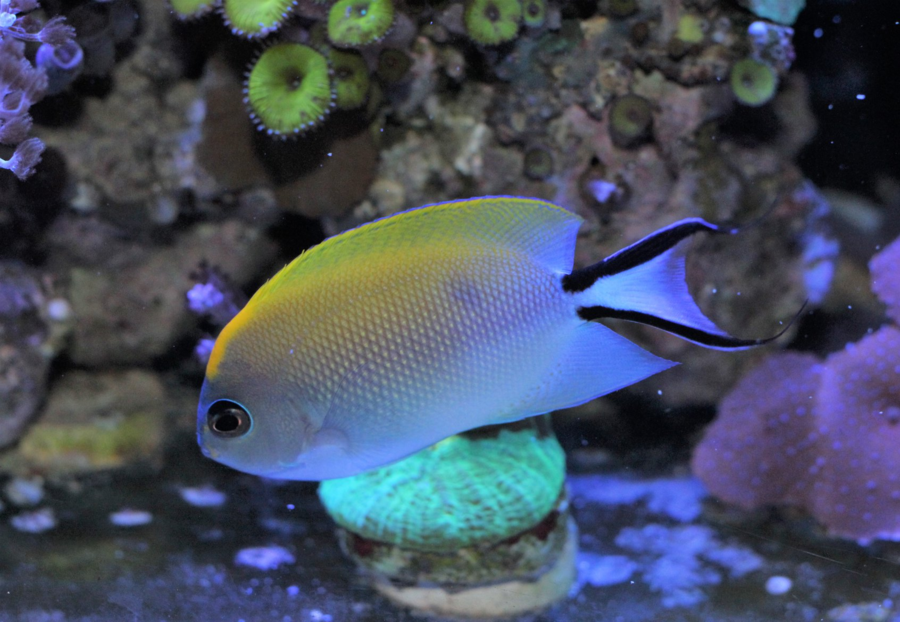 And a few more new pics 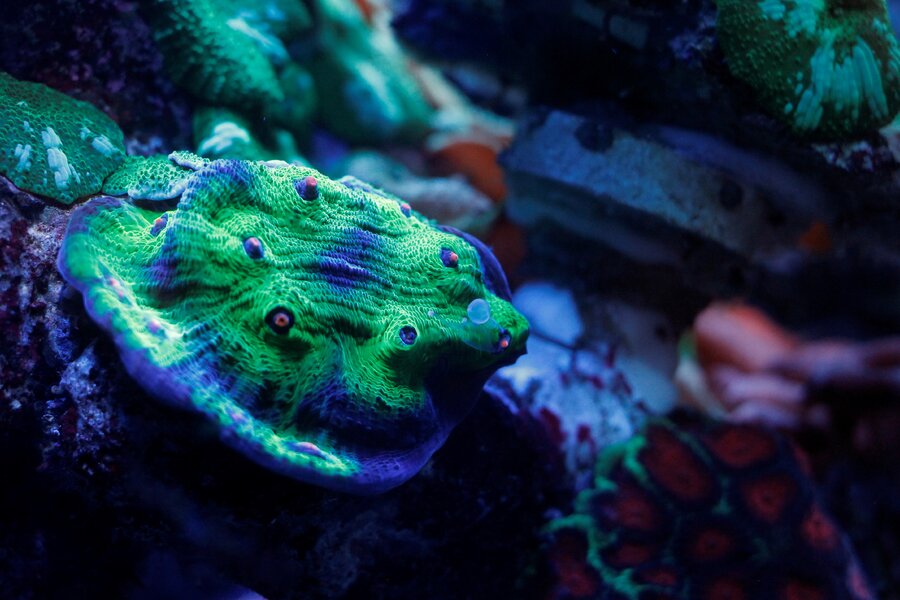 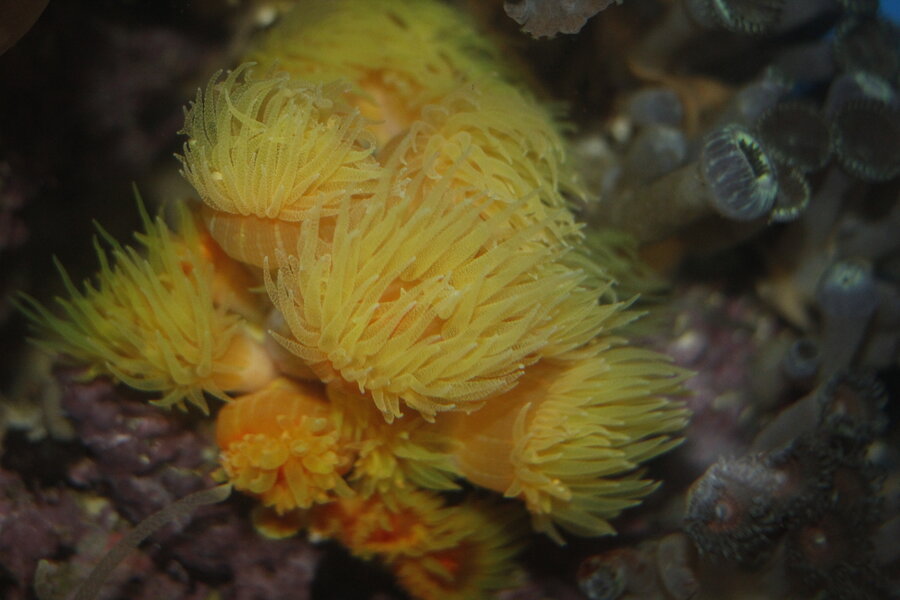 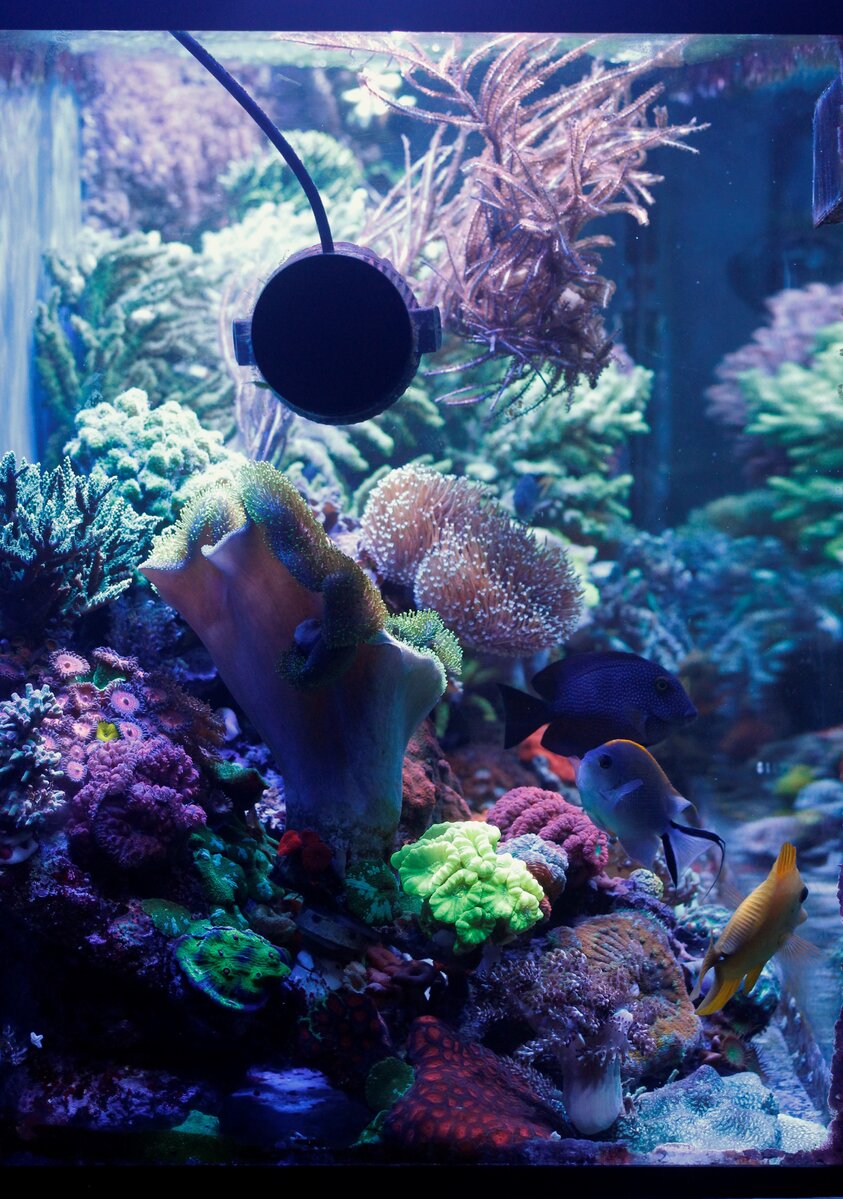 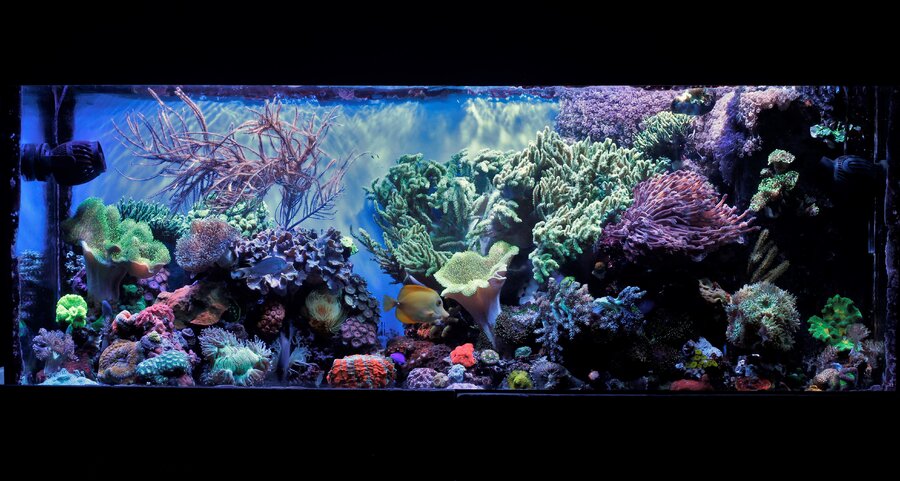 Thanks! It's semi controlled but not forced. If something is going to overgrow something depending on what it is I let it happen. If it's something like a mushroom I will cut it off, but an encrusting coral can encrust away. A lot of corals have also learned to tolerate being closer together than I would have suspected. Still I try and place things where they have the best chance both for success and room to grow in the way I expect them to grow.