I have this tank in my living room and have it split to pretty much be 50/50 frag area and display area. The display area is on the far end away from the AIO wall and all the pumps so it’s a good spot for things that appreciate lower flow so I have zoas and mushrooms there. Then the half next to the aio chambers has a frag rack with things I fragged from the display side.

I’ll be adding more details and copying from my journal on my local forum in the next few days, but here’s a recent picture of the front 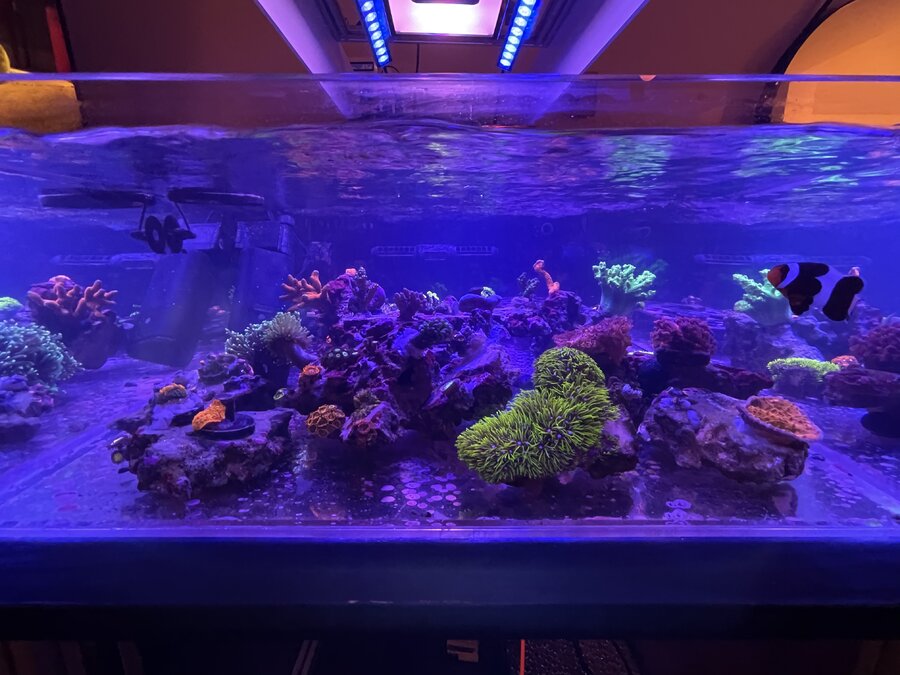 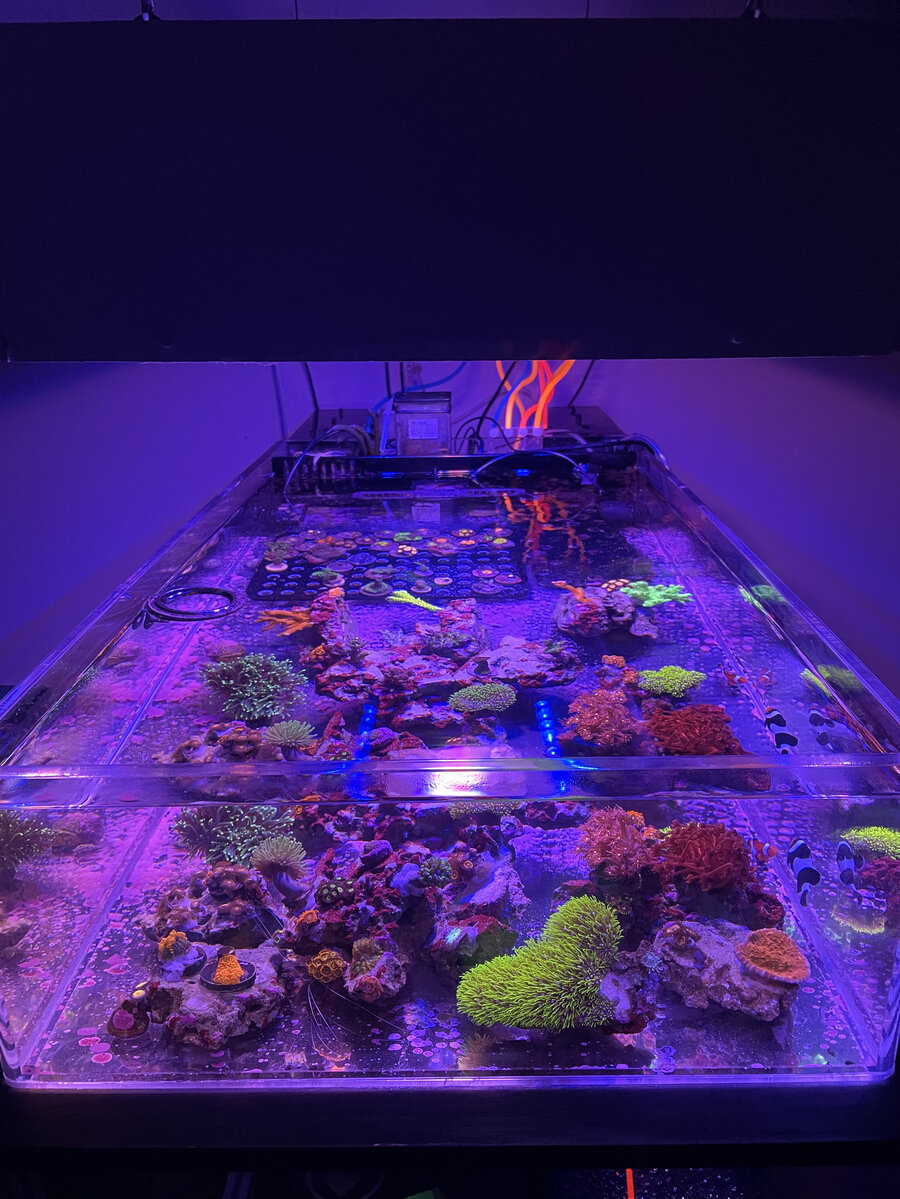 Lighting
Lights: G4 XR30 supplemented by 2 24” aliexpress 470nm led bars that are dimmed with a break out board and dimmable power supply controlled by my GHL


Filtration
Filter floss and an IM nano skimmer
I also have mangrove seedlings but I’m not sure what impact they have at this point. I have low nutrients and dose nitrates to keep them up 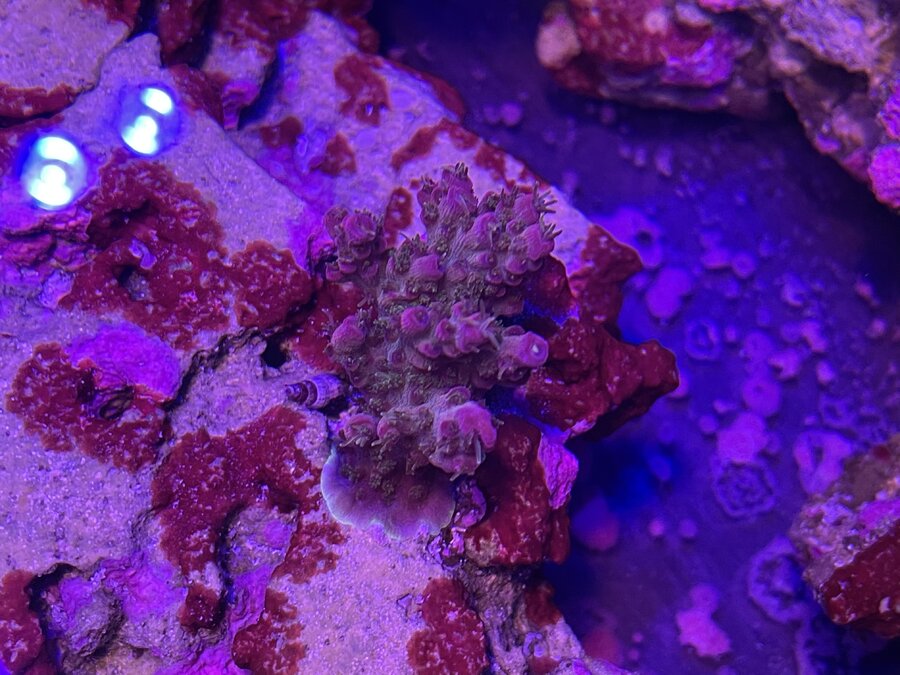 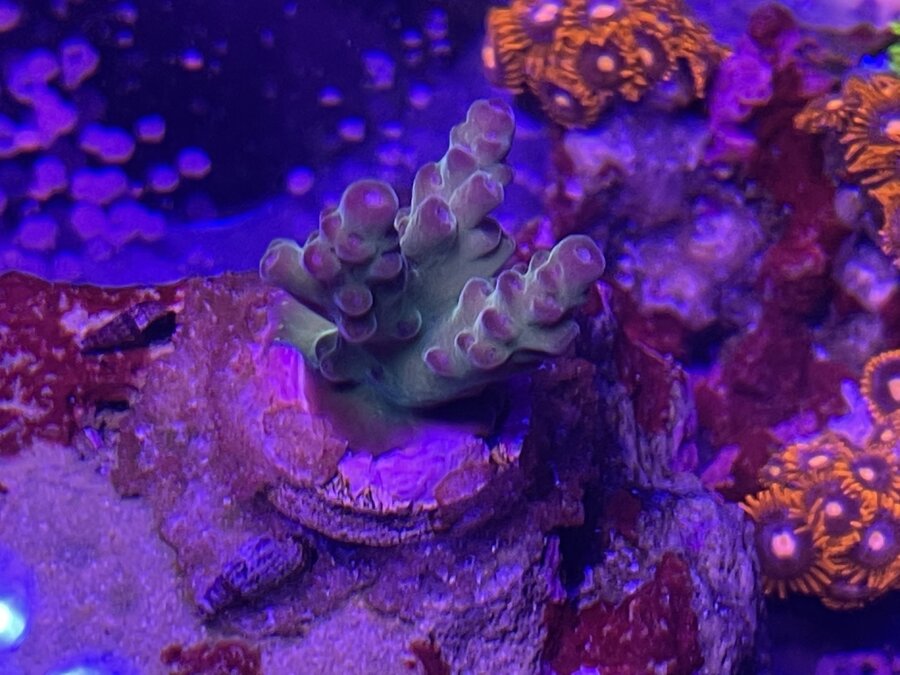 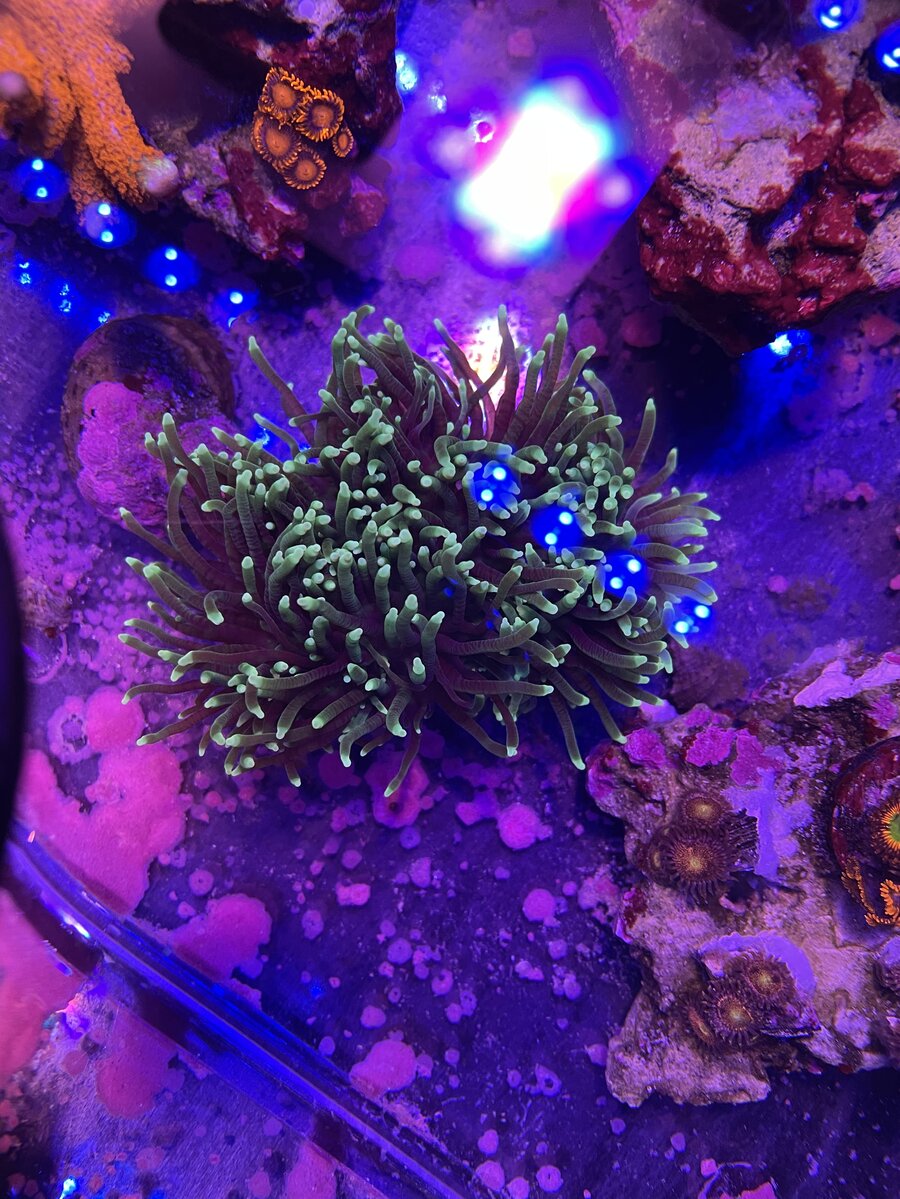 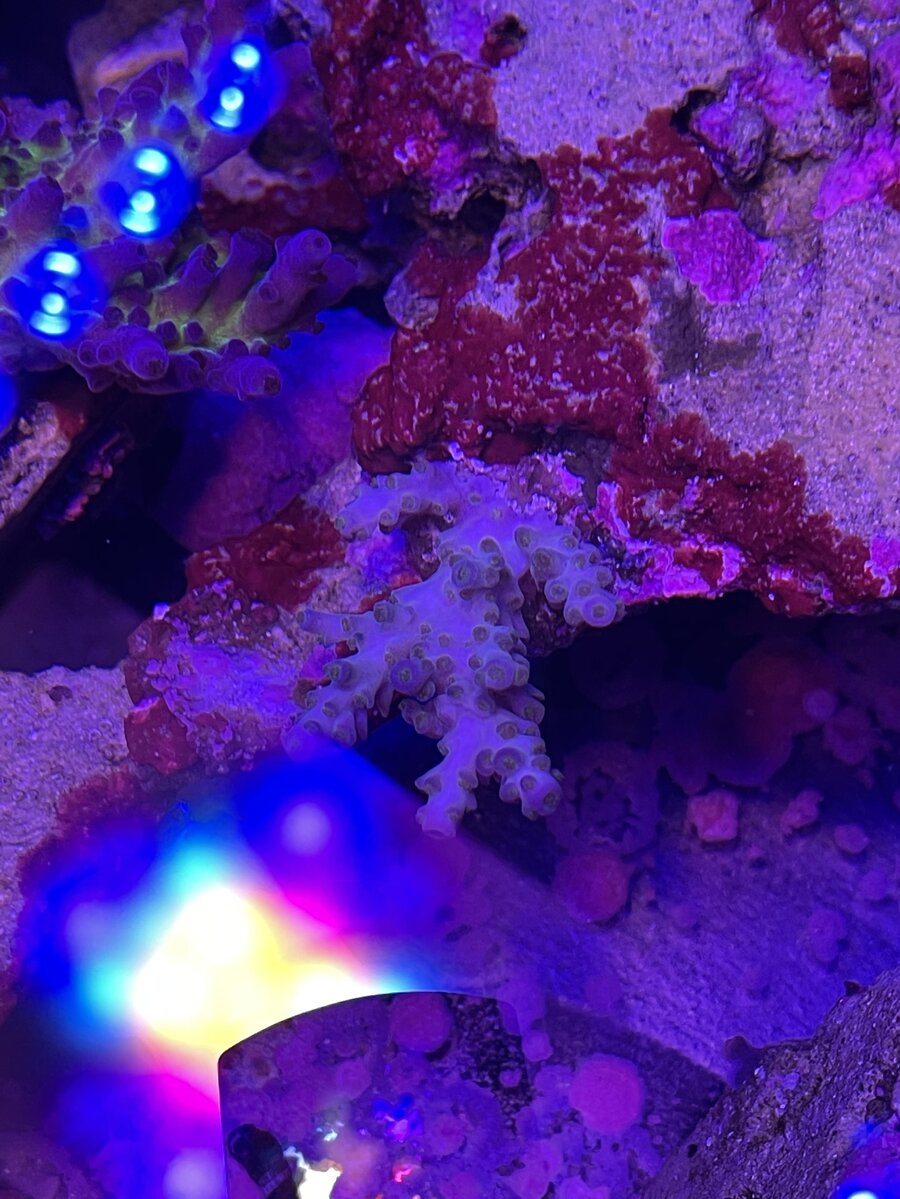 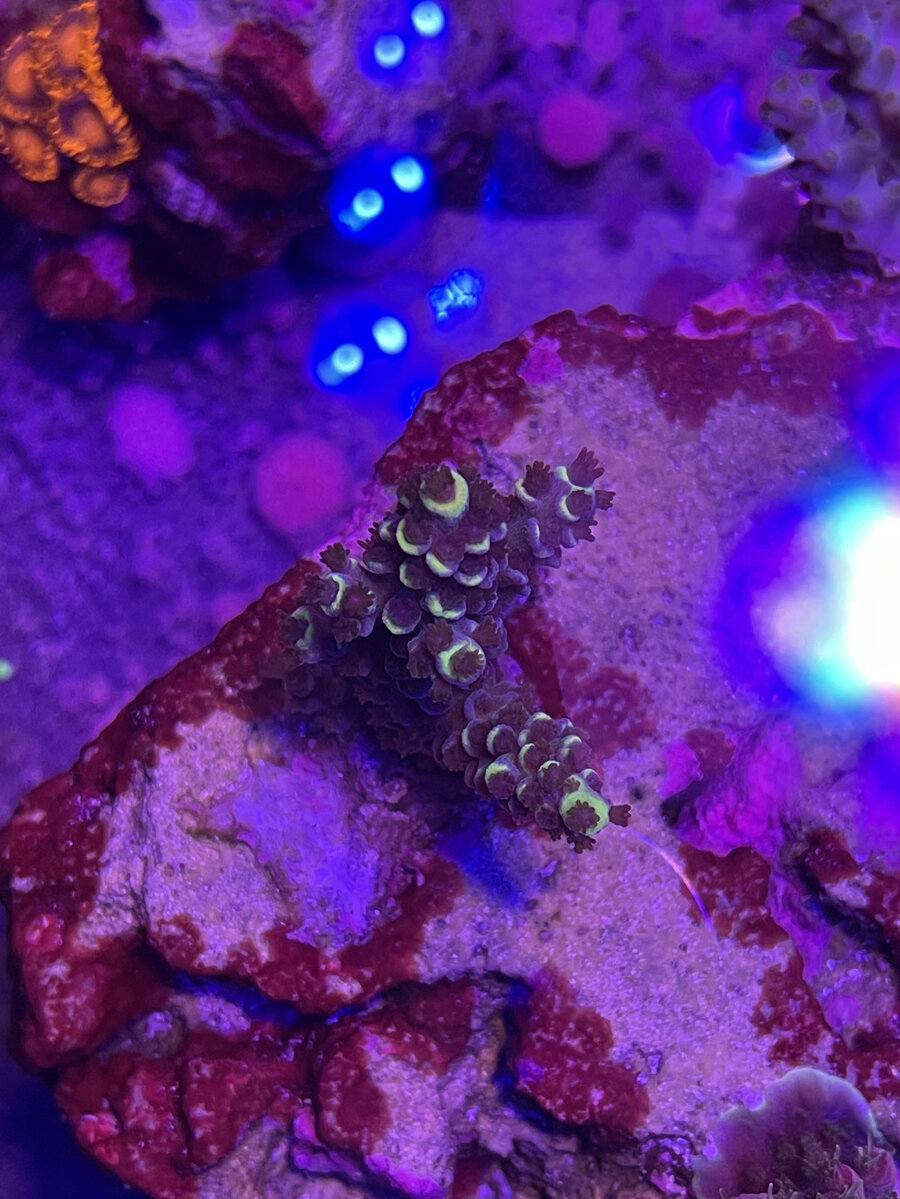 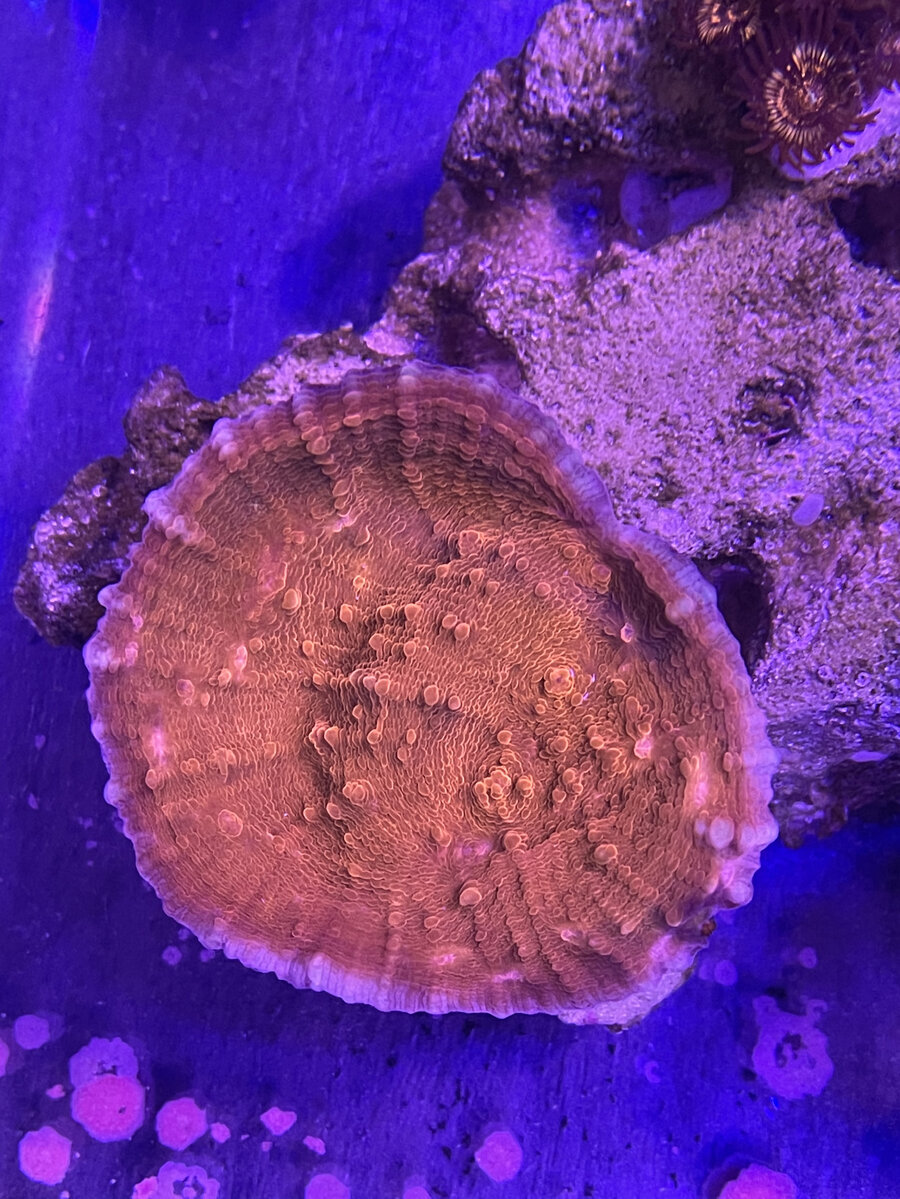 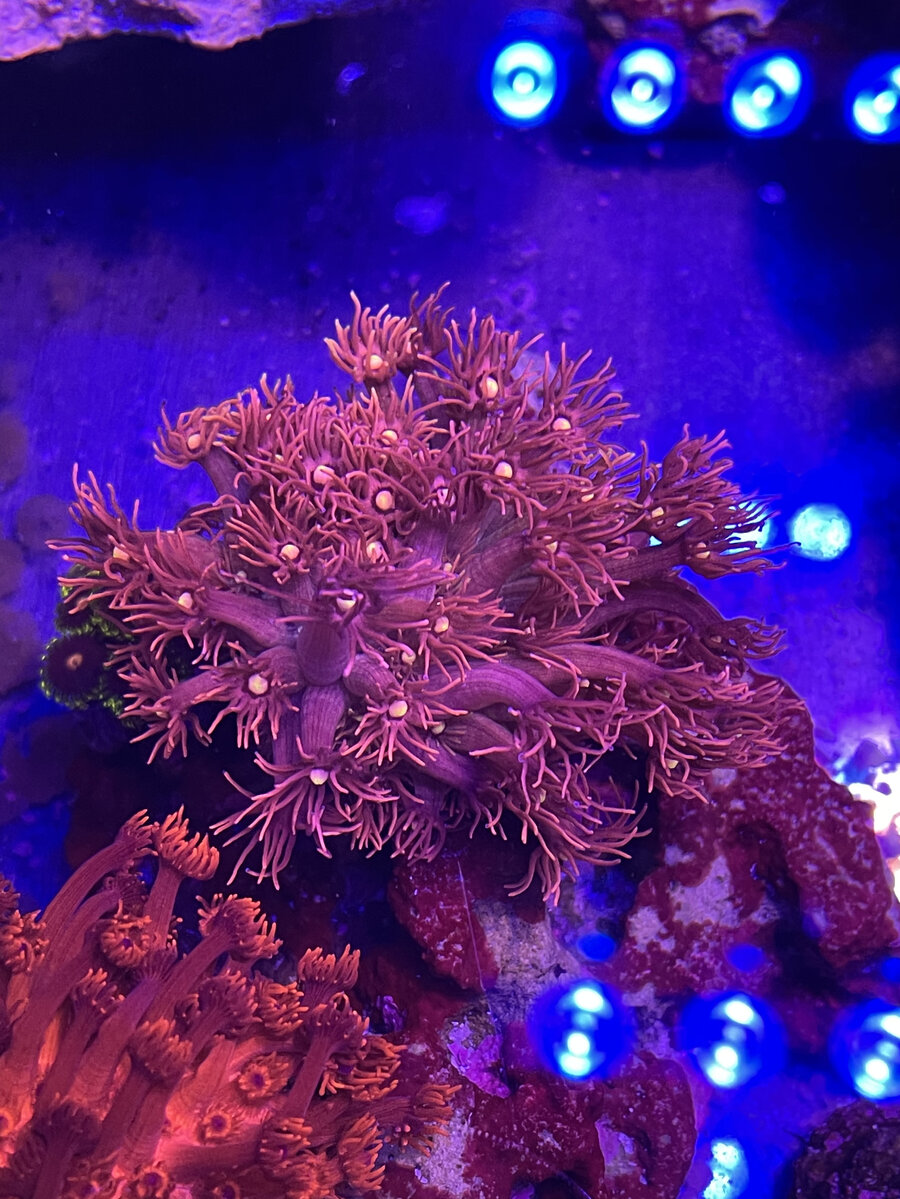 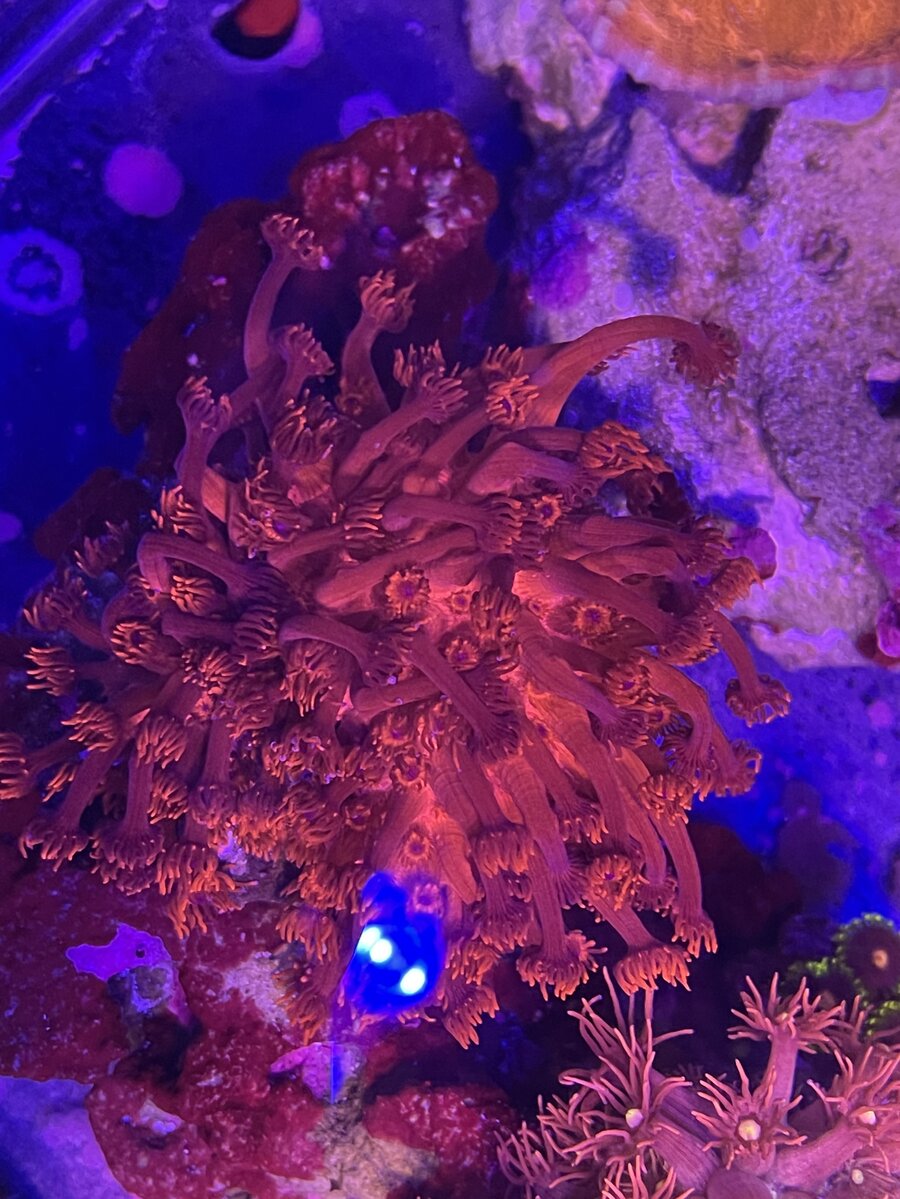 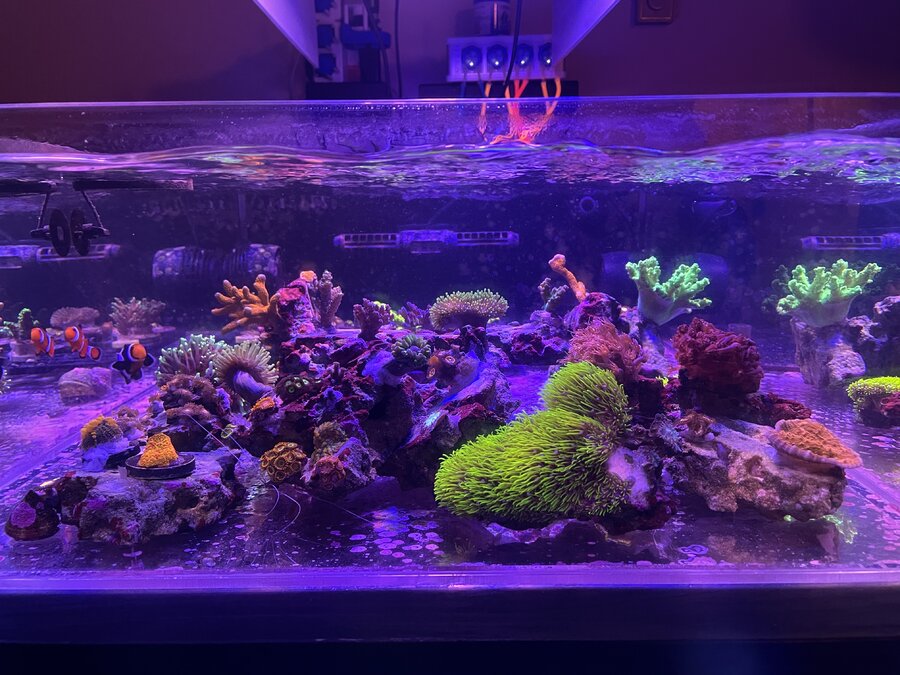 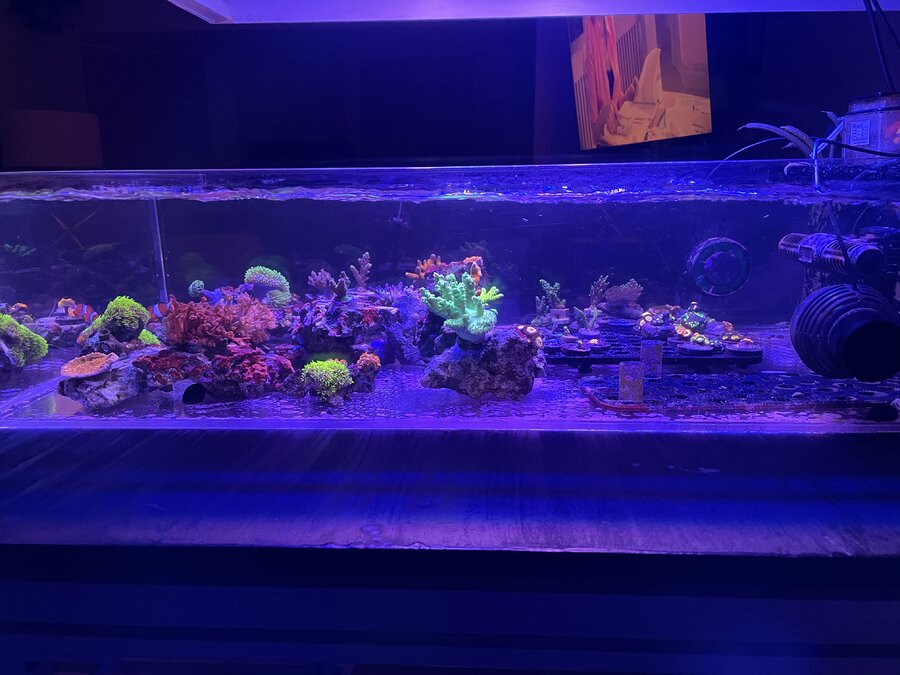 This is what the tank looked like just 6 months ago. 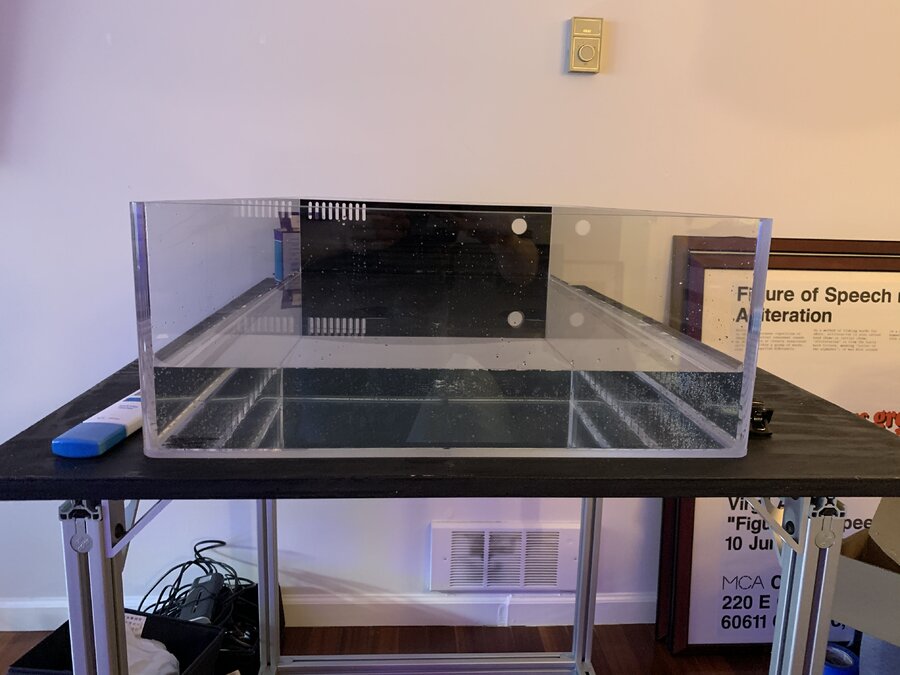 I was planning to copy over events from my other journal on a local forum, but I had a minor crash/coral loss event that makes me bummed out to look through old pics. I lost a lot of corals due to a nem getting blended by a powerhead, I will cherish the corals that survived and know they’re some hardy corals.

Ideally I would have had this tank setup for longer before I put corals in but my options were limited due to life circumstances. I had to put everything I had in a previous frag tank into this new one while the rock was still bare white. I did anticipate this so I did put the rock into a holding tank with dr Tim’s and I fed a little to hopefully start a bacteria population before I put it all into the tank 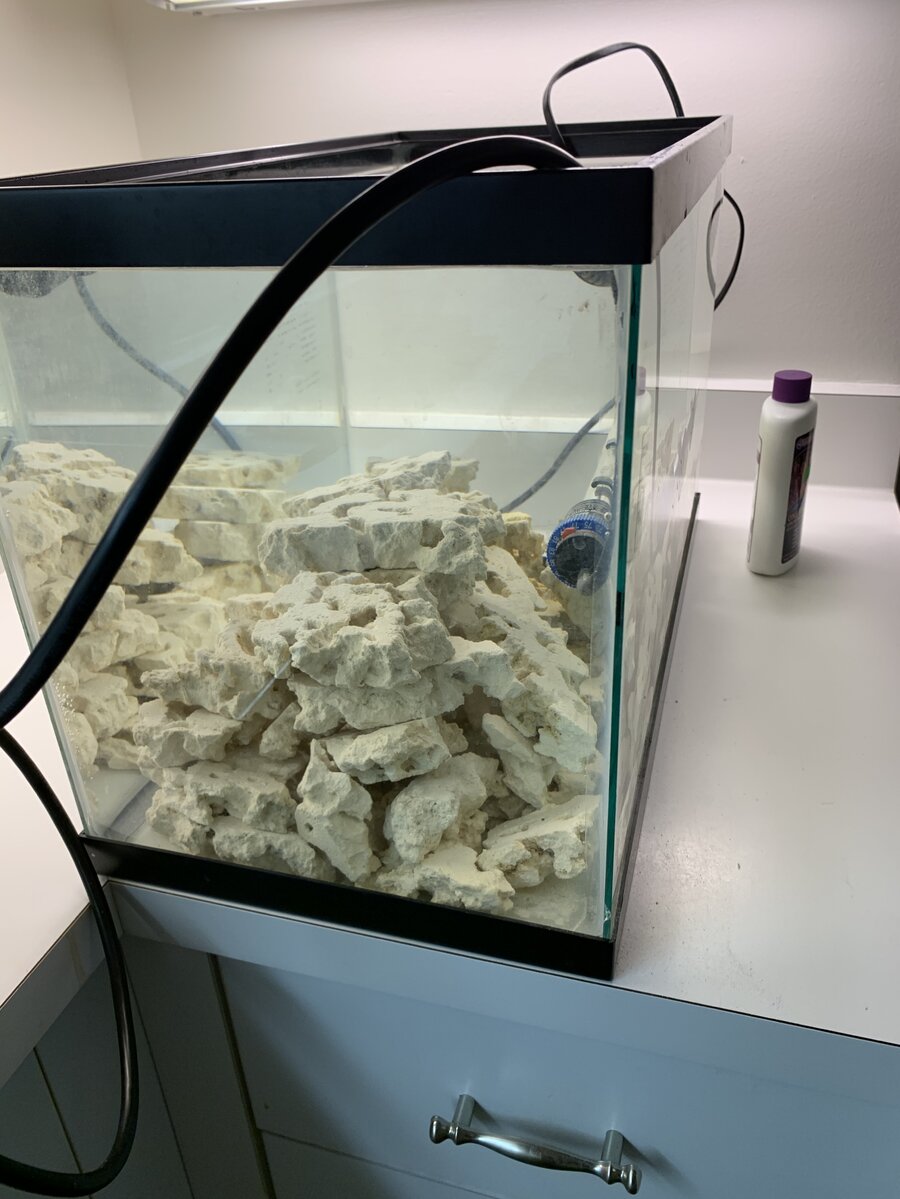 here’s a picture of my frag racks when I first got everything moved into the new tank. I have 1 of the acropora, the gonis, one of the montis, the gsp (duh, haha), and the zoas. I lost almost everything else 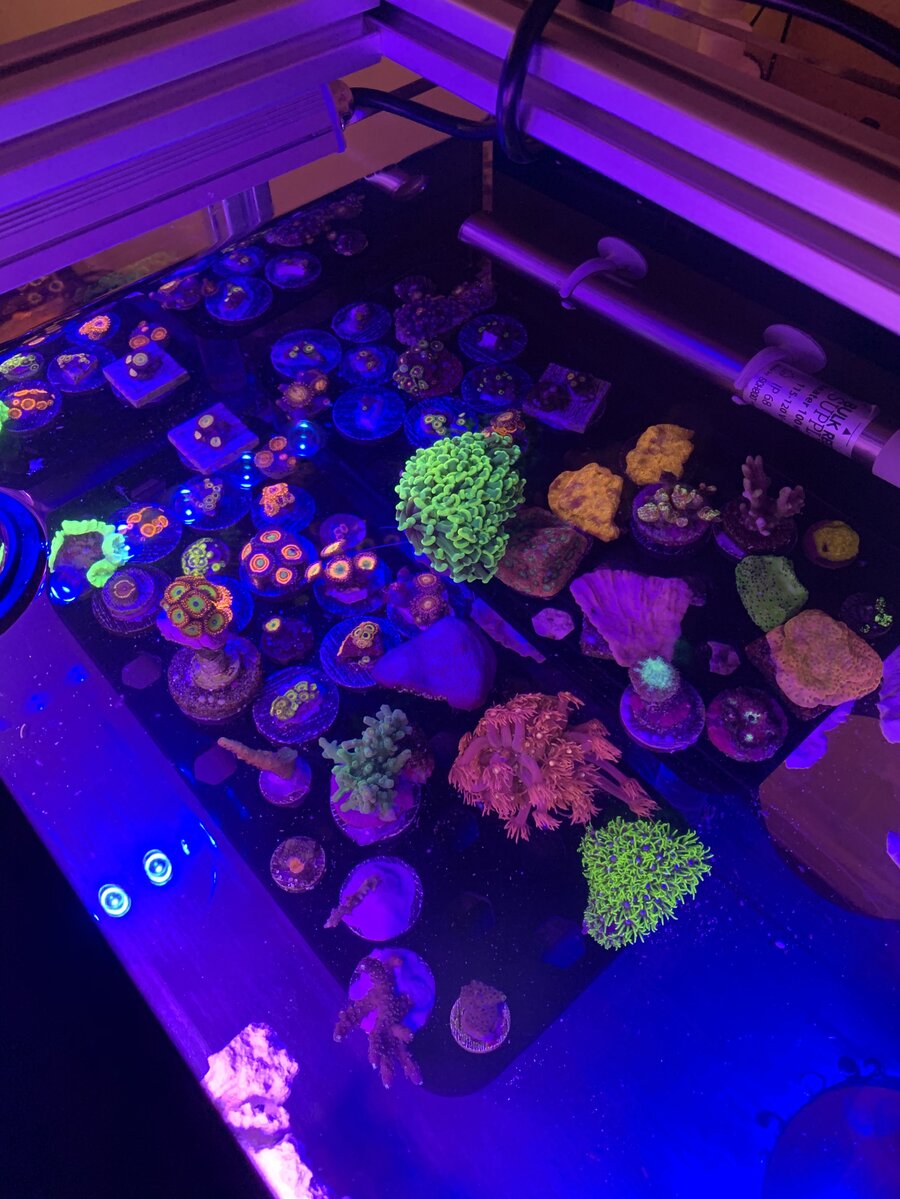 This weekend I’ll try to add some information about how I take care of my tank. I’m still such a new Reefer with just a year of experience with some highs and lows. I am open to criticism and would appreciate any input you have, I want to utilize this groups hundreds of years of experience. Thanks everyone, enjoy your tanks/weekends!

Welcome! Looking good, glad you stuck it out through the low spots and glad to have you here on the forum

Water
I start with Tropic Marin Pro salt that I mix 10 gal at a time. I make it with RODI from my brs 4 stage rodi, I’m fortunate to have low tds source water, around 25. I change 5g/20% each week, but I’m lazy so it becomes every 2 weeks pretty often. I want to automate this soon.

I try to keep alk at 8, Nitrates around 1ppm, and Phosphates around .08. I don’t test for anything else on a regular basis.

Alkalinity
To keep alk stable I use kh guardian to test every 4 hours and have used that to build my dosing schedule. If I see a dip in alk I then set a dose to happen between the two tests where there was a change. This has gotten me a schedule where I’m theoretically dosing during the times there is an uptake which keeps alk very stable. Last week I was at 8 for 3 days in a row, then eventually it went to 7.9 and it got a bit thrown off by the increased dose. Going forward I’m going to wait to see 7.8 before increasing.
In the past month I haven’t had a change larger than .2 in a day which I’m very happy about, I was worried alk would be more volatile in a small volume tank like this. But I’m sure it would become tricky as things grow and alk intake increases.
I have been using b-ionic 2-part.

Nutrients
I want to keep N and P stable so I believe that a good way is balanced nutrient import/export. For export I have filter pad in the return chamber to catch food and detritus, a protein skimmer, the bacteria, and the weekly water changes. For import I have pellets on an auto feeder that’s aimed at a feeding ring, I feed frozen LRS nano frenzy, and I dose nitrates

For nitrates and other nutrient control dosing I got the ATI nutrition system that has N P and Carbon. I like that it will be consistent, I don’t trust myself with the diy after trying it for nitrates with the loud wolf potassium nitrate. So far I’ve only needed to dose Nitrates and have been dosing them to keep above 0.

I like this system because I can test weekly and if N is low I dose that, it P is low I dose that, if both are high I dose the carbon. Eventually I want to try to raise nutrients and see what the impact is and then I can dose carbon so I can raise the bacteria population. my understanding of carbon dosing is that it would increase the bacteria population which then consumes the increased nutrients from n and p and then the coral can eat the bacteria as a source of n and p.

My female clown had some stringy white poop stuck on its way out. It’s gone now, but is there anything I should do about this? 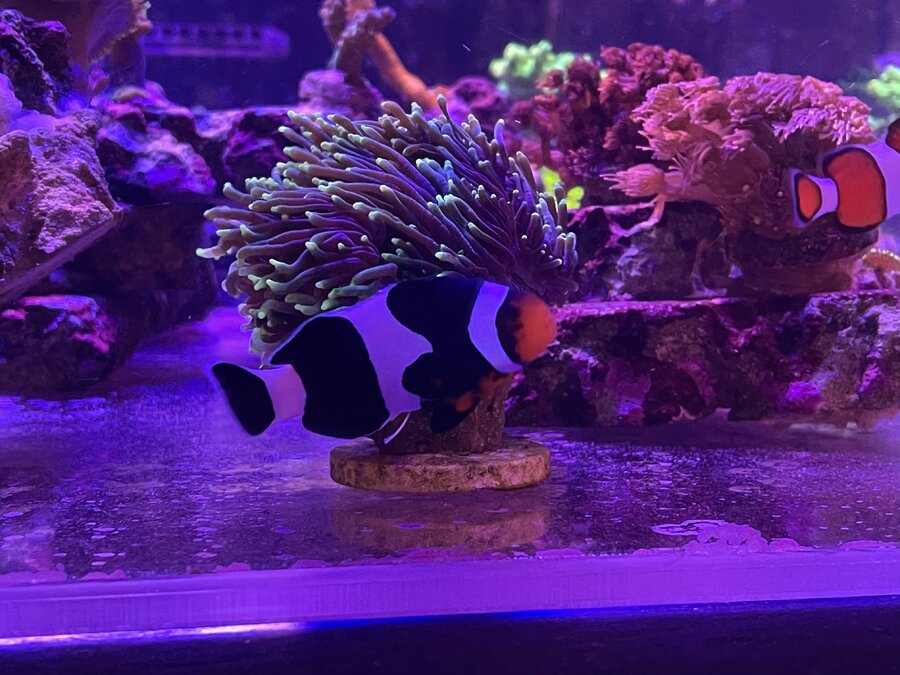 They are captive bred clowns and are currently the only fish in the tank. They have been alone for about 6 months since I moved to a small tank. I feed ocean nutrition pellets supplemented by LRS nano frenzy. Let me know if there is any additional information that would help. I have seen this happen before and did nothing, but it doesn’t hurt to ask this experienced group. Thanks!
O

I found another thread that leads me to believe that it is just due to the food. In the other thread HF said that there would be additional symptoms if there was an intestinal issue

Usually when a fish has intestinal worms or parasites the white stringy poo is consistent AND you'll also notice these additional symptoms: Pinched stomach, fish has faded coloration, fish eats voraciously but still seems to be losing weight.