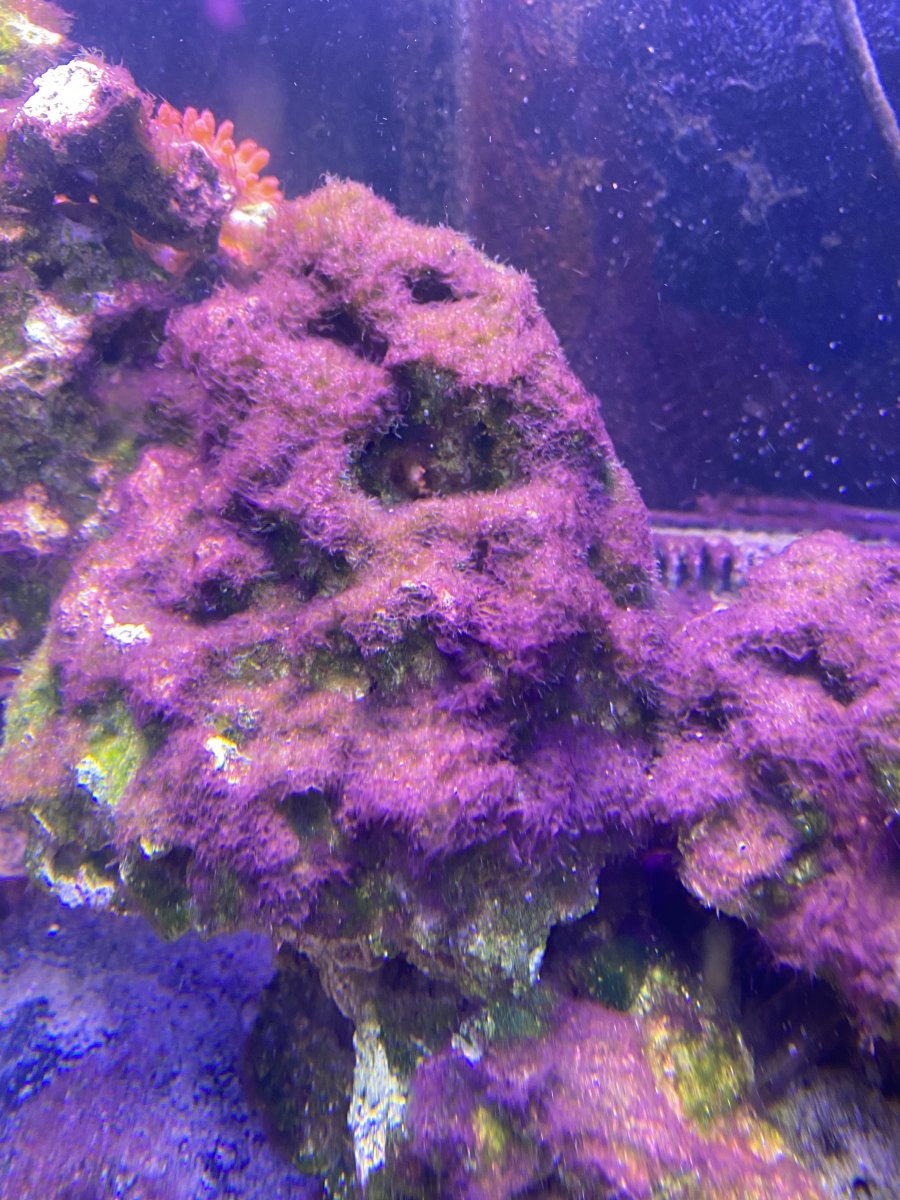 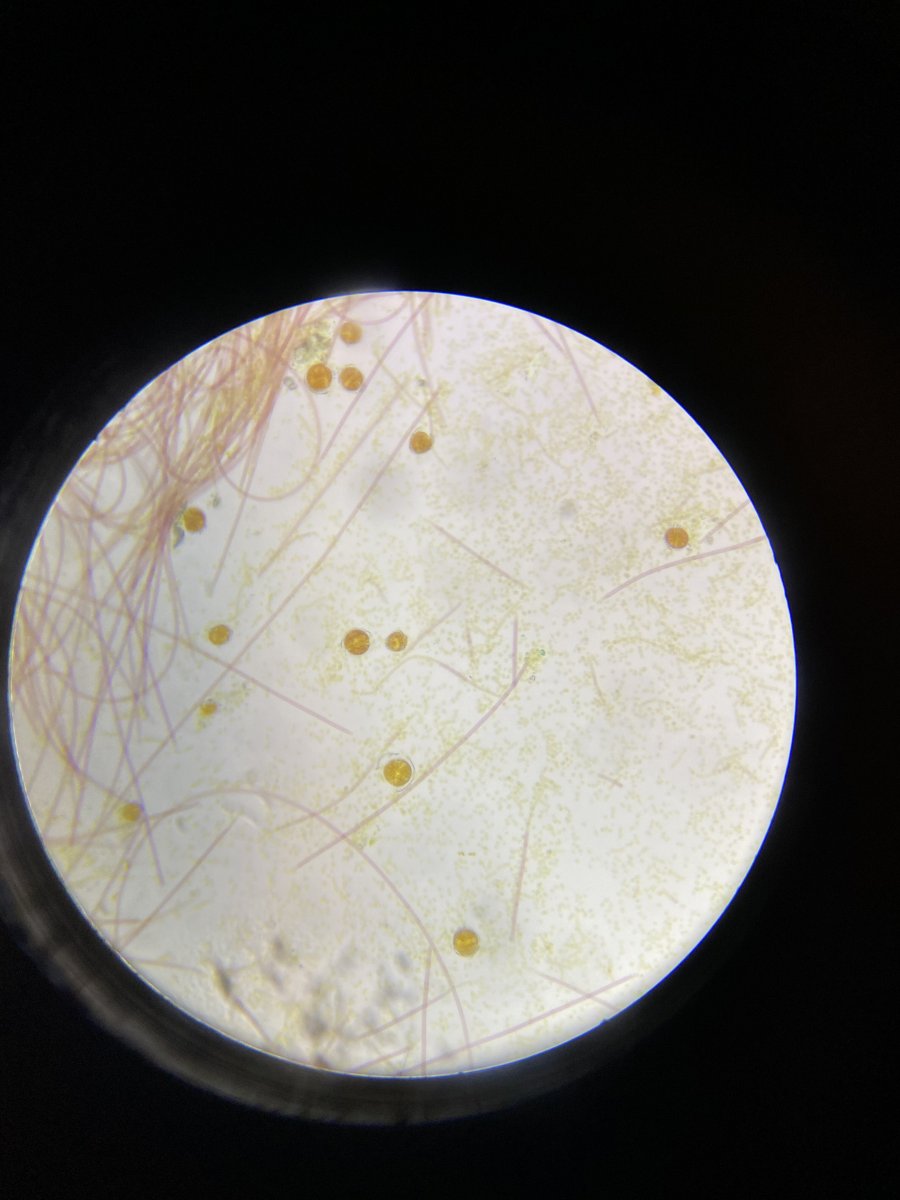 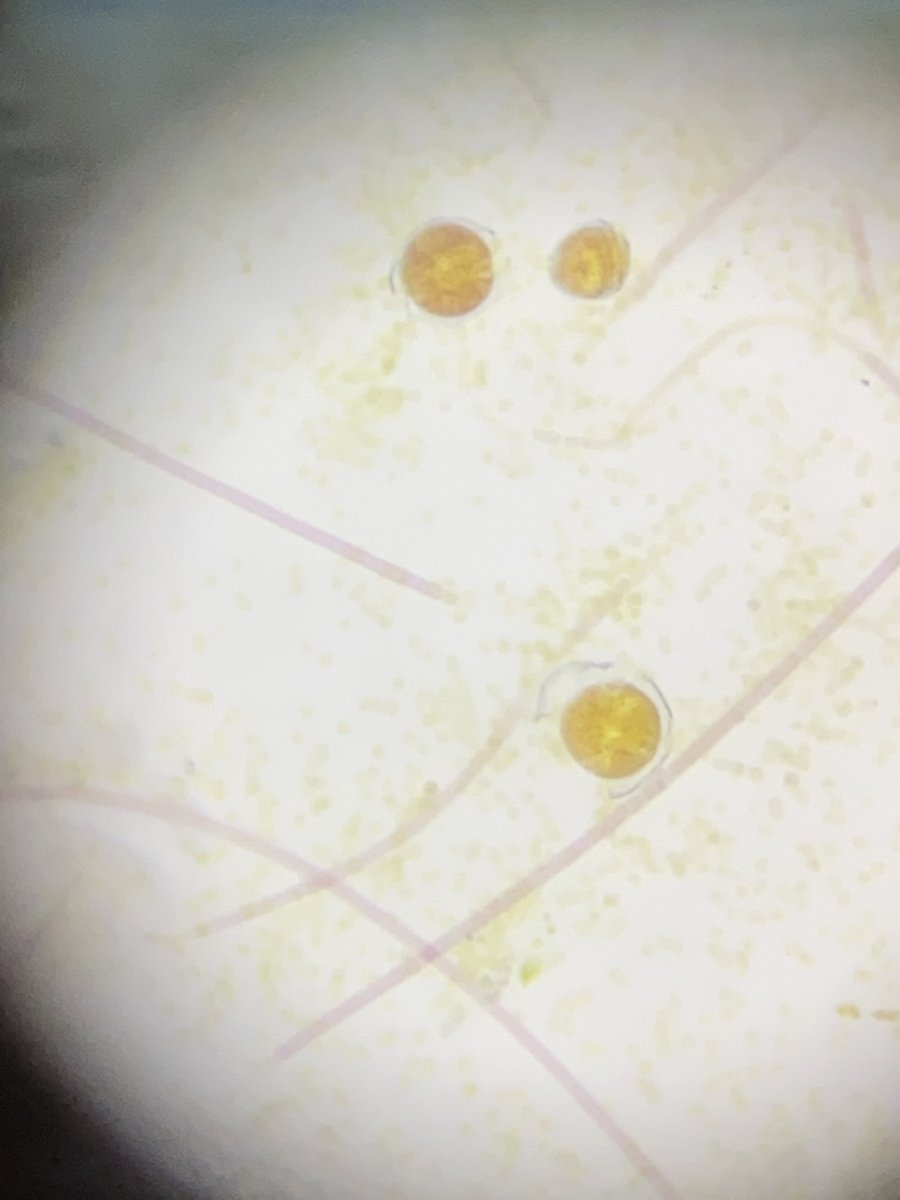 You looking at the little gold circles? Think its Chrysophytes
R

Thank you what about the long strings?
E

Reef AquaCult said:
Thank you what about the long strings?
Click to expand...

Maybe some type.of turf algea. Nothing crazy. Get a rabbitfish if your tank is big enough.

@Reef AquaCult, the video shows the definitive shape and movement of coolia dinos. Chrysophytes don't move, though they are indeed round like that and can have similar appearance to dinos in a tank. I'm attaching something for you to look at put together by a guy, Taricha, who knows micro stuff over on R2R. He helped us when we had dinos a few years ago in another tank set up. Scroll down past the main 3 seen in a reef tank, and you'll find coolia info, tips for treating, pics, and video. Coolia is a relatively non-toxic variety, thankfully, so you shouldn't need to worry about the health of your clean up crew.

As far as the long strands go, I'm assuming you haven't put the red turf algae under the scope yet, right; that the samples aren't of the turf? Were the samples shown just from the goop strands you sampled of the dinos? Trying to see if that is just cyanobacteria that coolia likes to coexist with, or if that was of the turf algae itself.

@scubabeth thanks very much. The turf algae is not really depicted in the photo. It is green and my rabbitfish has been eating it. Then I had cyano grow over that, and dinos over the CYano. It’s an ugly mess. Not sure if you have any advice on treatment, I reviewed the PDF and it doesn’t have a lot on treatment. Thanks again

@Reef AquaCult, I can see the green turf now under the cyano/dino ick. I thought the cyano WAS the turf, since it has the rough texture of the turf under it. We dealt with both ostreopsis and coolia in our tank a few years back, and were able to knock them into submission. I don't believe we eradicate dinos; we just allow other life in the tank to become more prolific so the dinos are no longer dominant. To do this, there are several prongs to the attack.

A couple suggestions for you to consider: Coolia do go into the water column somewhat when the tank is dark, so can be affected by UV, if you have access to a UV unit. If you want more info about UV, let me know.

Second: do you keep up with NO3 and PO4 readings in your tank? If so, what are your nutrient levels at the moment? The goal is to have your PO4 close to .1 and your nitrate between 5-10. It's best to achieve these numbers by dosing supplements, rather than overfeeding, as dinos seem to be better able to utilize the organic nutrients in food more readily than the inorganic nutrients in supplements. The reason for increasing nutrients is to allow other life in the tank to use those nutrients and begin to outcompete the dinos.

Third: manual disruption of the dinos. Each night, use a turkey baster to gently blow the dinos off the mats of cyano; they will disperse in a poof, not like in chunks as it would be if you blew off the cyano itself. The goal is to disrupt their "home base" a bit so they don't get too comfortable in a certain spot. Do this shortly before lights out, especially if you have or install a UV, so the dinos are in the water column to get more easily zapped by the UV.

Fourth: manual removal of the dinos. This next part is up to you--some folks leave cyano around to see if it will outcompete the dinos. With coolia and the way they exist so easily with cyano, I am of the mind to get rid of that, too, but that's up to you. If you want to remove the cyano, when you do water changes, use your hose to suck off as much of the cyano/dino mat from rocks and surfaces as much as possible. Kind of use the hose to rub on the rocks to loosen up the cyano, getting as much of it as possible into your hose and into the wastewater tub.

Fourth: filter pads. These are just the cheap ones any fish store sells, no medication, no carbon, just a filter pad to collect sediment. Cut off a piece of it, attach it to a clip used for feeding nori (or rig up another means of attachment, if you prefer), and suction it to your tank near an area of higher flow. The dinos seem to like the texture of the pad and will attach in horrific numbers, rather than attaching to some of your tank structures. Each night before bed, remove it and rinse it in freshwater, squeezing out the evil little buggers. I replaced the filter pad weekly, as they're cheap and they begin to break down over time with all the rinsing. This seems like a small and insignificant step, but it saved some folks' corals, as the dinos attached to the filter pad instead of the corals. Even if it's not bothering your corals, this is still a great way to remove mass numbers of them daily. The filter pad will become BROWN with them; so gross!

Fifth: raise your magnesium levels to 1400. This is still a very safe number, close to natural seawater actually; our tanks usually have much lower levels. Buy the big liter size of Brightwell Aquatics Mg and a Salifert Mg test from the vendor of your choice. It takes a lot to raise it! My husband thinks this is the nail in the dino coffin.

Oh-would you attach a full tank shot so I can see what areas of your tank are most affected? I'd like to see if it's just mostly where the cyano is, or if it's also elsewhere. It looks in the one image like you might have a bare-bottom tank; is that correct? If so, at least we don't have to battle dinos on your sandbed. Also, I'd like to see what other biodiversity you have in your tank at the moment.

Thank you @scubabeth for being so helpful
Check out links below for more info:

Wow thank you so much for the extremely detailed information! I feel like I should reimburse you for your time.

I do have an underpowered I think 38W UV so I think that is helping somewhat. Im currently having to dose the tank nitrates and phos to keep the desired levels. When I first checked them during outbreak nitrates tanked to 0. No theyre running within recommended range. Ive been taking my wavemakers and blowing off everything once daily. Ive also been doing some manual removal but its a pain! Filter pad is brilliant I will definitely start working on a rig today. Raising mag also great idea thanks. Full (embarassing) tank shot attached! Again thank you so much.

Bonus points if you can find my chicken of a rabbitfish putting on his camo for the camera - crazy how they can change colors instantly! 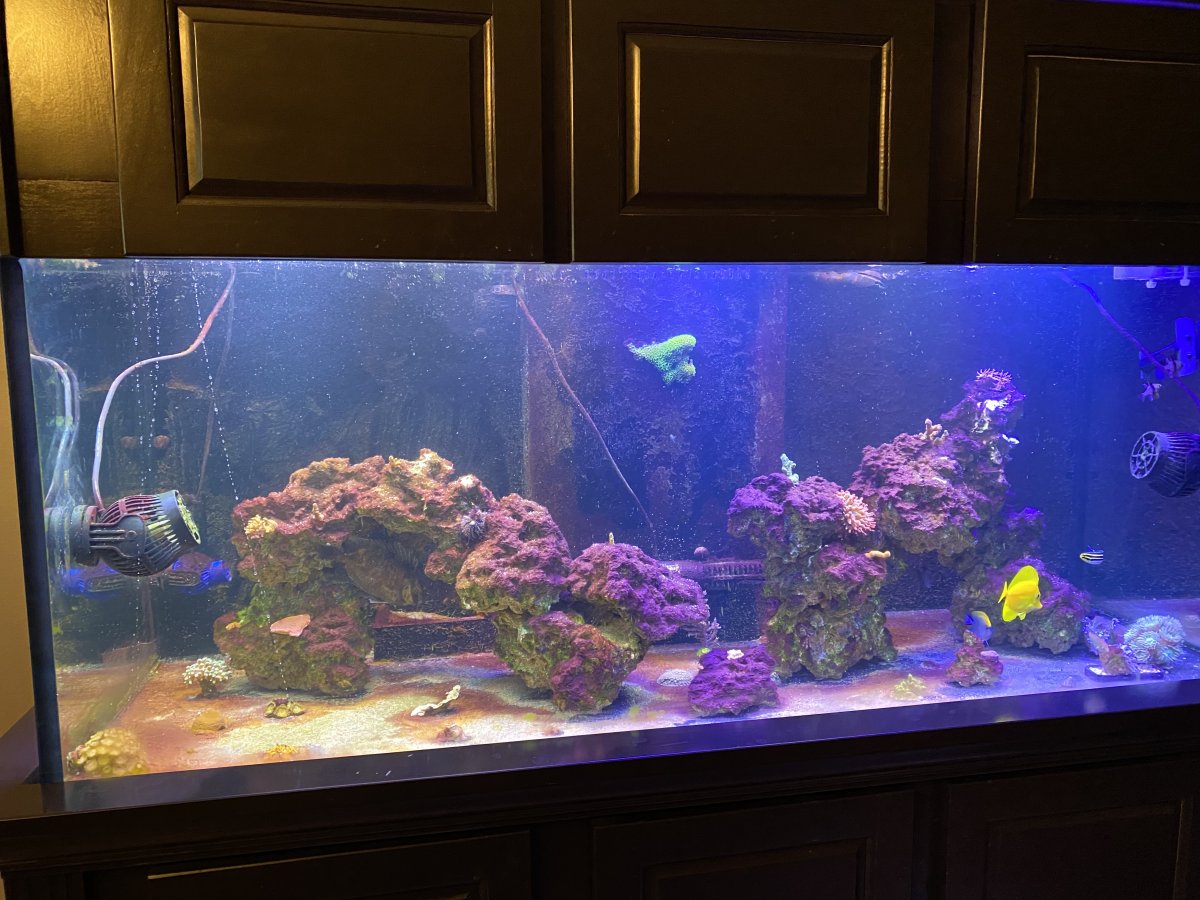 @Reef AquaCult, I'm more than happy to help with anything I can. With dinos, though, there doesn't seem to be any one specific fix, even when tailored to the species of dino, as every tank is different; I'll do my best to give you some good advice, though. The above worked for us with coolia (and ostreopsis), so hopefully it'll help you, too. Dinos are a big old pain in the behind, and I'm sorry you've got them! I definitely empathize with the unpleasantness of manual removal; keep plugging away at it!

You have a really nice stand and canopy for your tank. By the way, your tank doesn't look like it's too far into dino territory; when dinos truly take over, nothing else is growing at all, so at least you have some competition in the form of the cyano and turf algae, so that's good news! Also, are your corals still using Ca and Alk? If so, that's also a good sign because there is still enough good stuff in the tank to allow them to be growing. Our Ca and Alk usage dropped to nearly zero during dino time; I think it was the Ostreopsis that were so bad for the tank, as their strands were also on corals. When I zoom in on your corals, I don't see any nasties on your corals; hopefully that's is the case and just that I can't see them well enough.

It's funny that the purple on the rocks looks just like coraline algae; it's all cyano, though, you say? Covering the green turf algae? At least your rabbit nibbles at the turf. I love rabbitfish! We have a magnificent ourselves; looks like your camo man under the rock arch is a scribbled. Such neat fish!

It sounds like you've already begun to work on the issue since you're dosing nutrients and have the UV.

Coolia seem to like it if there's TOO much nitrate in the water, so I would aim for the lower end of the suggested range, closer to 5. (Incidentally, having a good amount of nitrate in the water can also put cyano in check.) As long as you consistently have readable nutrients, you're good! You probably already know the general rule of thumb is at least 1 watt UV/3 gallons of water, and running in the DT (rather than sump). Looks like you've already got it in your DT, so that's good. We also used an undersized one (a Green Killing Machine); I think it helped, but it was too small to truly be effective.

Do you get coolia on the front of the tank? If so, I'd place the filter pad on the front near one of your pumps, so it waves in the current some. If they don't seem to favor the front, you can put it in back left near the wavemaker back there and see what brown crud you can collect daily. Ostreopsis really like higher flow areas, and coolia favor medium flow, so somewhere near where they like to congregate with the ability to move in the current some.