Hey there. So this tank has actually been going for about 3.5-4 years but I’ve done next to nothing with it. After I ordered a custom 180g from Crystal Dynamics, I started breaking down my 55g in preparation for the build. Simultaneously, I had an outbreak in the 55 and my qt tank (obviously I cross contaminated somehow) housing a flame and a rhomboid wrasse. I lost all fish minus two black/white occelaris clowns. Having also sustained multiple severe injuries in a work accident at around the time, I opted to put the (still vacant) 180 on hold for a while and purchased a biocube to house the clowns.

Things went well for about a year so I added a BTA, which split a few times, and a couple frags. Within a few months my entire tank was covered in gha or bryopsis. Admittedly, I felt overwhelmed and just kinda gave up.. I gave the nems and frags away and just kept the lights off for the better part of a year. I’d do the occasional water change, try the lights for a few days until the algae came back, then gave up again...

Anyway.. About a month ago I (finally) got mad at myself for allowing this to happen and began doing daily 10g or ~ 33% waterchanges (I’m still limited to how much I can lift/carry) for a week. I then did 5g every couple of days. Throughout this time I was blasting rocks/sand with my turkey baster and changing the filter floss 3-4 times a day. I swapped my original coralife v1 skimmer (air stone) for a v2, swapped my jbj nano refugium light for an Acke I found on InTank, went through a couple of bags of chemipure blue, and cleaned the crap out of all equipment.

TLDR- I had a FOWLR for 3 years and have decided to try my hand at reefkeeping again. Pics/equipment list to come
Last edited: Jul 28, 2021 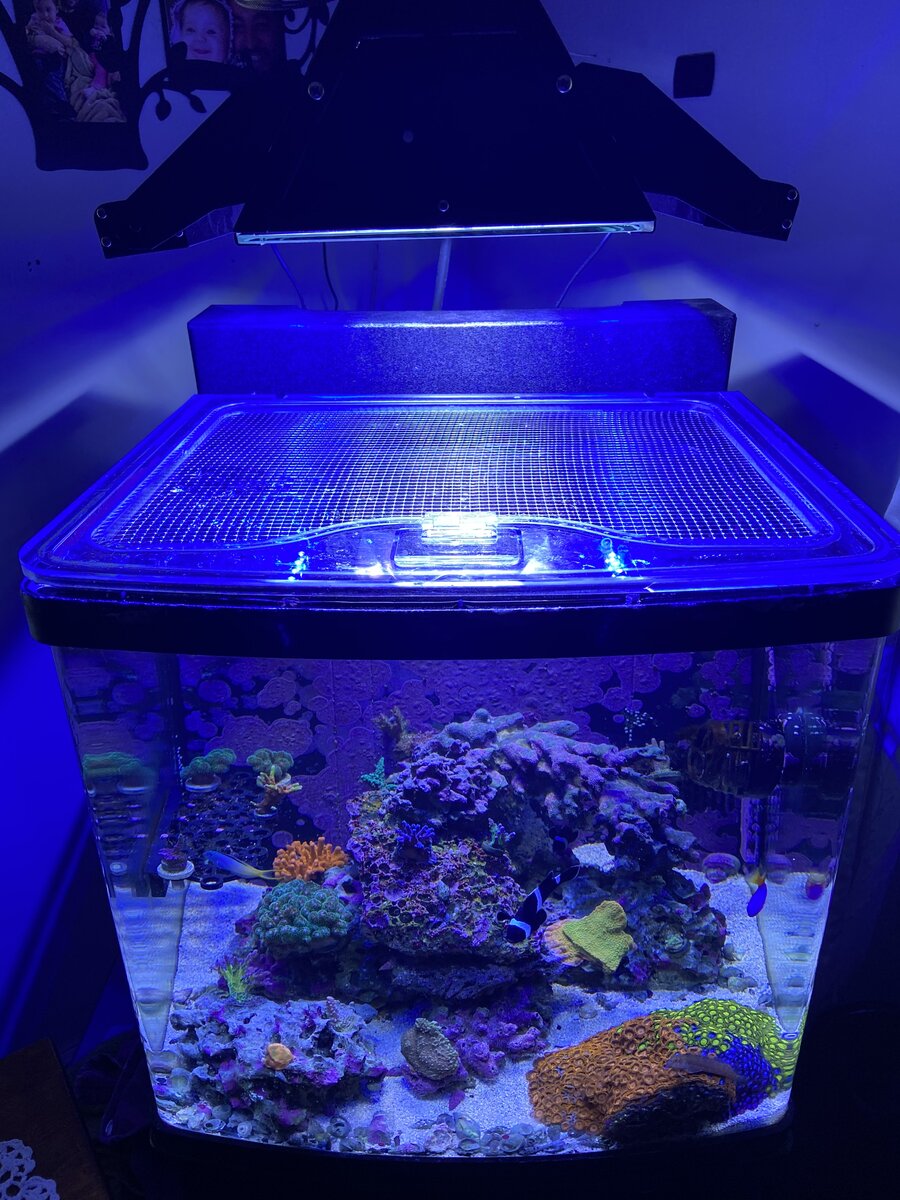 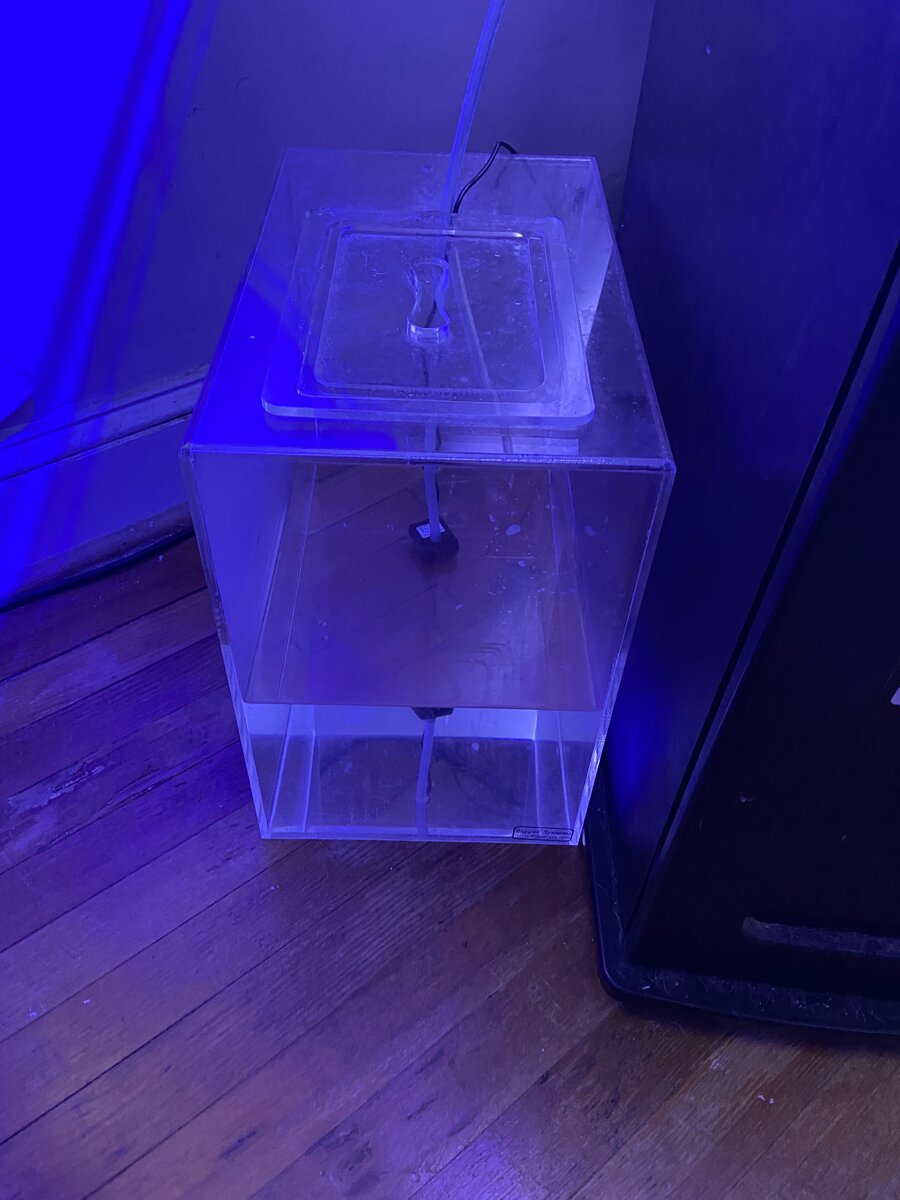 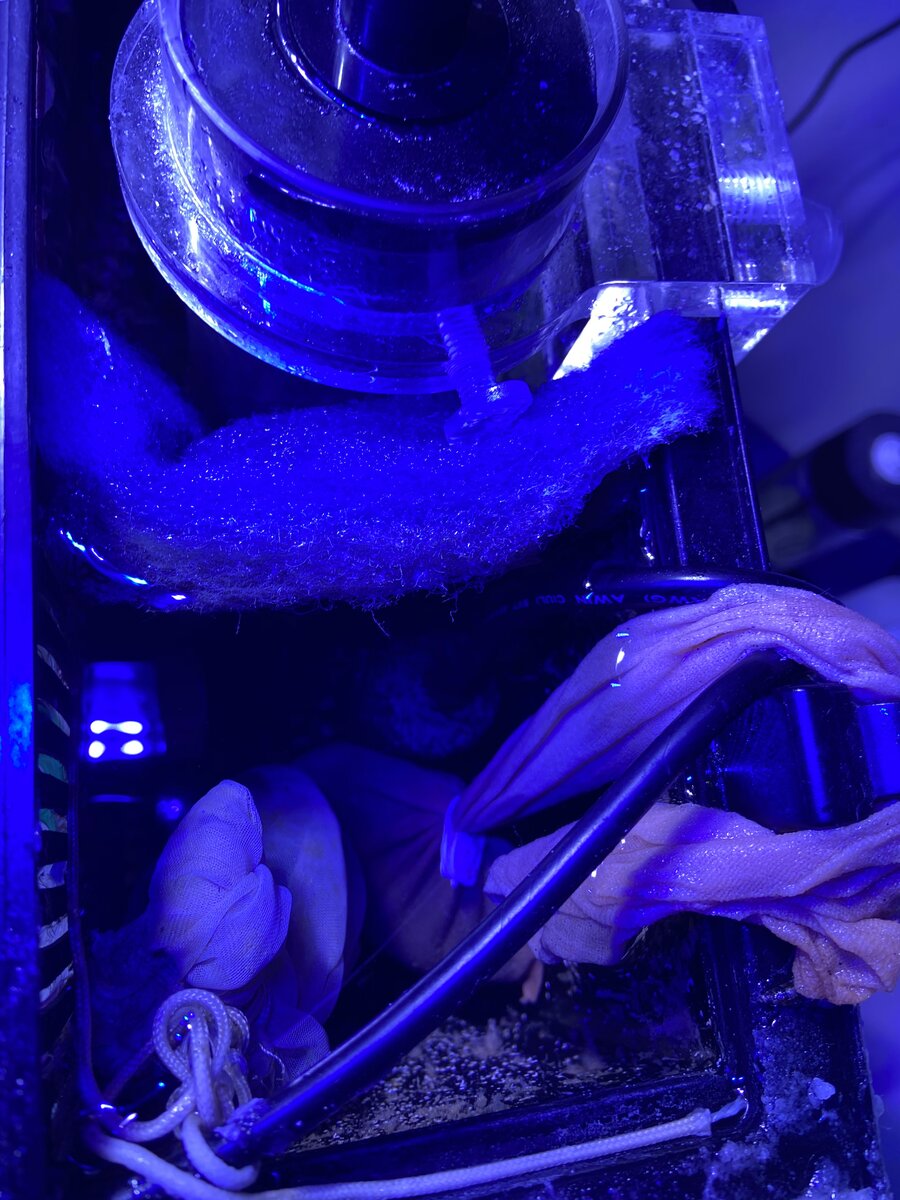 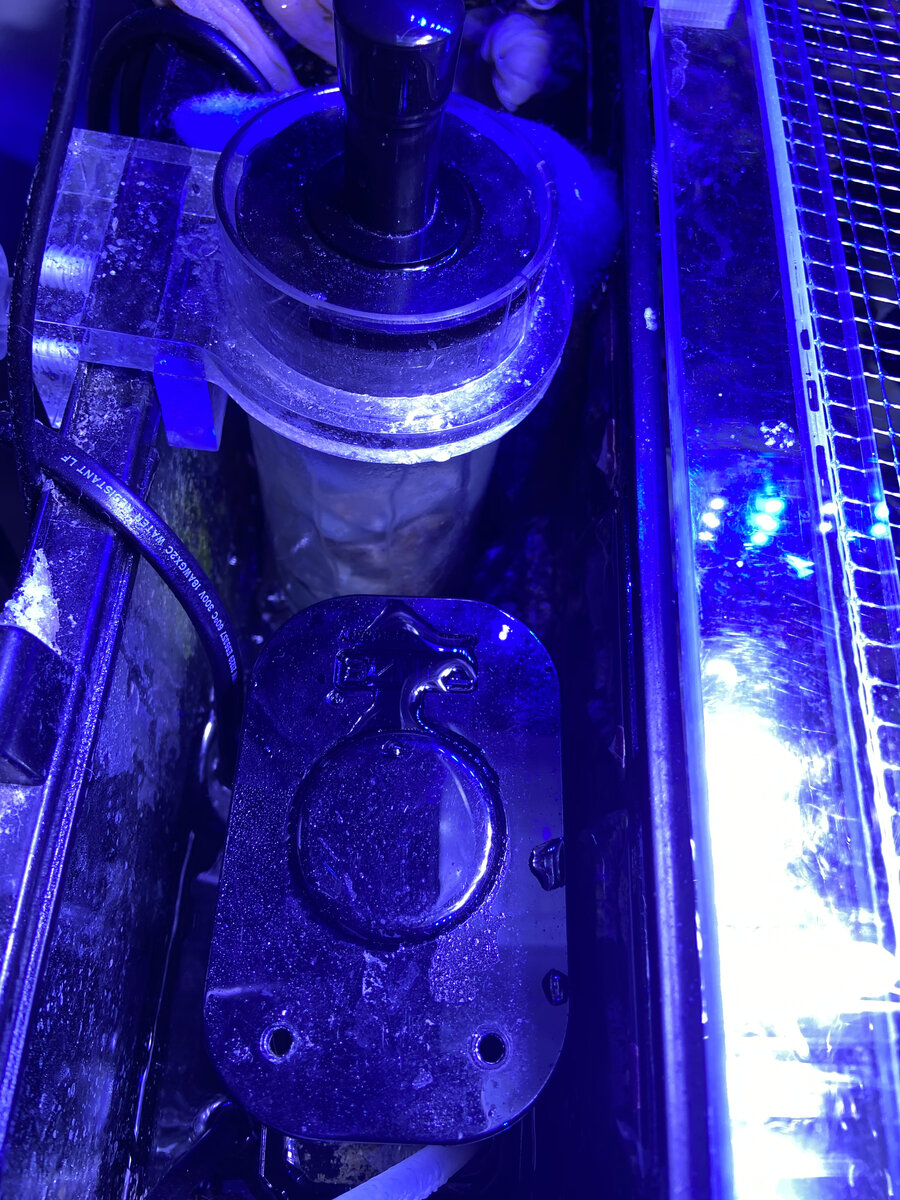 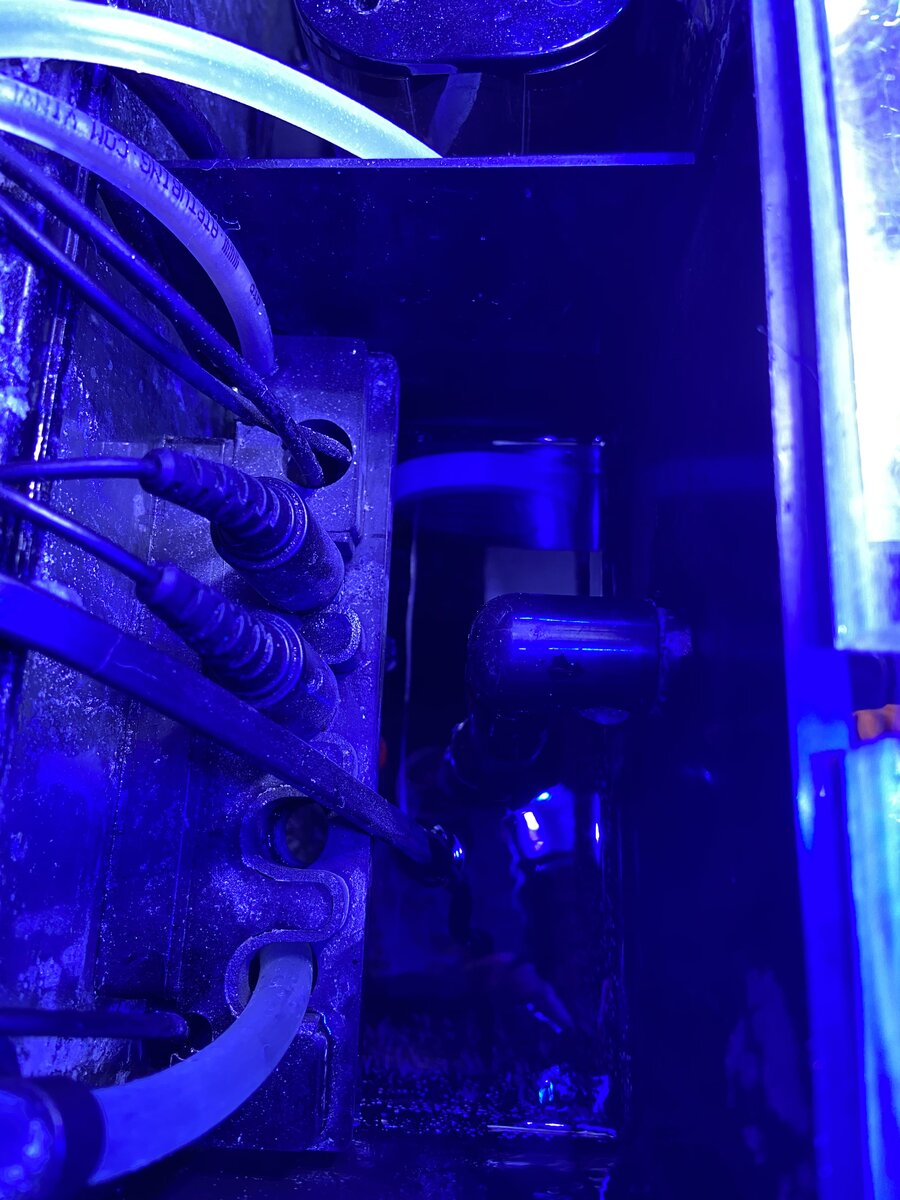 Nice! Thanks for sharing!
How To - Quarantine

On a personal note, I’ve finally been medically cleared to go back to work, though certainly not HVAC. I started looking for a new job for the first time in 6 years and had my first few interviews in over 10 lol. I actually accepted one of the jobs on the spot Saturday and have already cleared the background check and drug screening. I should be starting any day now! I’ll be doing electronics and appliance repair because all I’ve known and ever wanted to do professionally is fix, install, maintain, etc things. I did cars in my early twenties then HVAC for several years before ‘the accident’.

Anyway, between a steady income and the settlement/severance pay, I’ll be looking to add a frag tank here soon and finally get that 180 running. Once the frag tank is ready I’ll be placing some SPS orders, growing them out, and finally get to be apart of the CRB

Already made a thread about my ICP results, but the gist of it was aluminum, silicates, and phosphates were detected. I discovered my Icecap Gyre magnet was leaking black metallic fragments, and God knows what else, into the tank and I suspect that had a hand in my water quality issues.

I switched salts from IO to TM, added some rubble rock from aquabiomics, started weekly dosing Aquaforest mud a few weeks ago, and started weekly dosing KZ’s non zeo coral 1-4. I’m receiving a couple of reactors from Jessican tomorrow and will begin using rowaphos once my new return pump comes in Thursday. I’m going from a Sicce 1.5 to 3.0, which is double the output, to bump up turnover and feed the reactor. I’ll run that for two or so weeks and send out another ICP to see where things stand.

Since I needed another powerhead I went to my LFS this morning and bought a Reef Octopus Octopulse 2. I’d been eyeing them for a while and finally had an excuse to get one. I turned it on about an hour ago and I’m in love! This thing moves some water and I suspect one side of my tank is going to be bare bottom

dwwataz said:
Dear lord was I right. I have never seen, nor tasted (got a mouthful of it starting the siphon

Lol. I have done this several times. Tastes way worse than the water from my cichlid tank.

Funny thing is that I have the little pump bulb to start the siphon, but it doesn't work very well.

bluerider098 said:
Lol. I have done this several times. Tastes way worse than the water from my cichlid tank.

Funny thing is that I have the little pump bulb to start the siphon, but it doesn't work very well.
Click to expand...

I bought a couple of those but one of them just never worked. The other ripped at the bulb and dumped water on the floor while I scrambled to break the siphon. I don’t get water in my mouth often, but it’s always the most disgusting water when I do lol

Just you're everyday Aussie looking to collect as many butterflyfish as humanly possible!
Wrangy's Waterbox Wreef

Thanks man! I can’t wait to upgrade this to a larger cube (with a sump!!!) but, for what it is, it’s a decent little tank. I think it’s going to end up as a frag tank some day

I couldn't see the clowns in your other pics.
Check out my build thread, click on the badge!
Slowly compiling a google doc of helpful info, check it out!

I couldn't see the clowns in your other pics.
Click to expand...

Thank you man! This tank has definitely kept me on my toes lol.

It’s surprisingly difficult to get a good pic of the clowns. When I want a pic, they’ll hide. Any other time I’m near (or in) the tank they’re quite social and obnoxious. Here’s what I got a moment ago.. The female is larger than the photos suggests. She’s a moose! 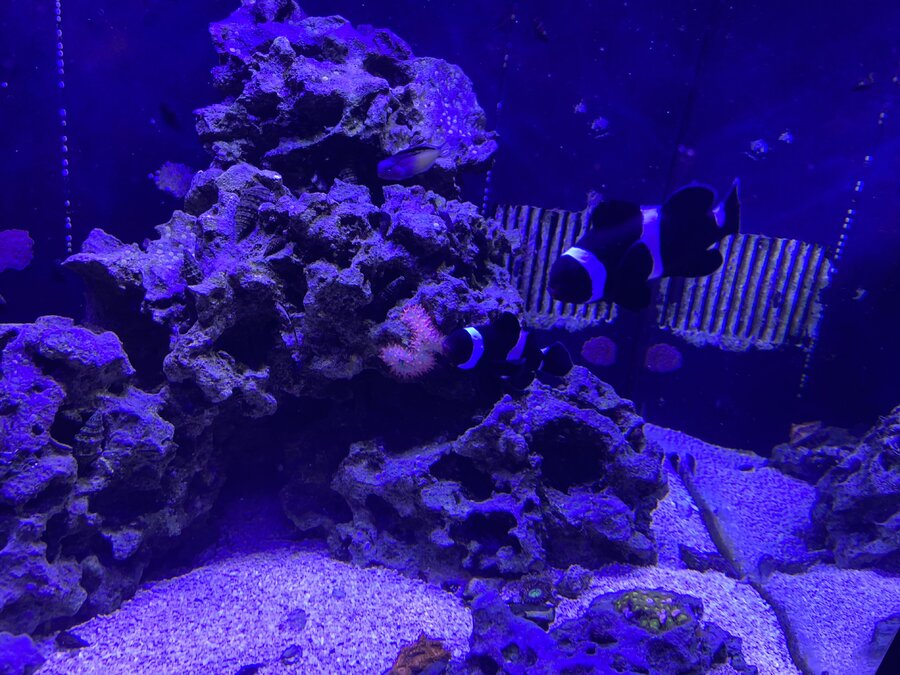 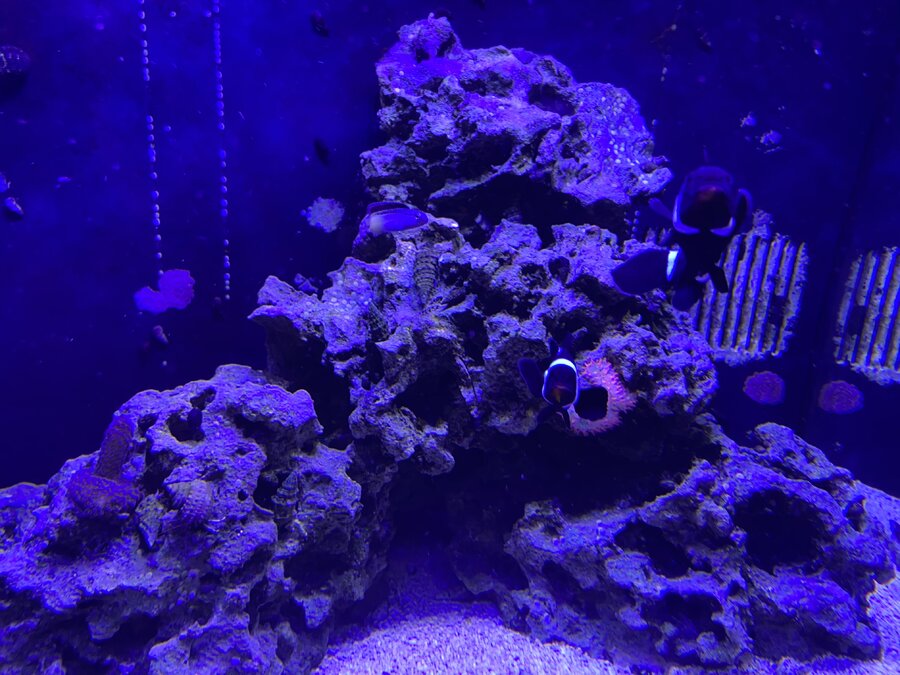 Clowns look good! Yeah that female is thicc
Check out my build thread, click on the badge!
Slowly compiling a google doc of helpful info, check it out!

I have a 6 stage drinking RODI (75gpd) kit that I’d bought from brs years ago and needed to replace the filters. I’d debated buying a second unit and having 1 for drinking and 1 for the tanks but that didn’t seem practical or cost efficient. Marine depot gave me a $10 coupon to BRS last week, where I also had $19 in points I hadn’t used, and their filters were 15% off as well so I did a thing (I know, I know but I saved $40). I bought new filters, their 75->150 upgrade membrane, and their 3 DI addon kit. 9 stages may be overkill (and pricey!), but I’m on well water and if this prolongs things it’s worth it to me.

If I’m doing this in my head correctly, it’ll go from the first five stages into single bed, cation, anion, then mixed bed? Drinking water is already diverted before DI.

That path sounds good. Carbon then ro filters. Since you're on a well do you have a CO2 degausser? Best to start with that.
Check out my build thread, click on the badge!
Slowly compiling a google doc of helpful info, check it out!

Count Krunk said:
That path sounds good. Carbon then ro filters. Since you're on a well do you have a CO2 degausser? Best to start with that.
Click to expand...

You know, I honestly don’t know. I have a water softening system that has two towers similar looking (but larger scale) to the nitrogen and acetylene tanks I used in hvac. There’s also a tank for salt, a tank for bleach, and a couple of in-line filters

Mm I would test the output of that for CO2 just to see. CO2 burns through di, do if you're not having that problem, then I wouldn't worry about it.
Check out my build thread, click on the badge!
Slowly compiling a google doc of helpful info, check it out!

I have a separate RODI for drinking water, and I run that thru a calcium cartridge after the RO to add some beneficial minerals back. Personally I think it tastes better.

bluerider098 said:
I have a separate RODI for drinking water, and I run that thru a calcium cartridge after the RO to add some beneficial minerals back. Personally I think it tastes better.
Click to expand...

I’ll have to look into that. What do you mean taste better though? My RO just tastes like water to me. I have been a smoker for 21-22 year though, so my taste (and smell) is all but nonexistent

Easy, stop smoking for 10 years and you'll know the difference!
Check out my build thread, click on the badge!
Slowly compiling a google doc of helpful info, check it out!

dwwataz said:
I’ll have to look into that. What do you mean taste better though? My RO just tastes like water to me. I have been a smoker for 21-22 year though, so my taste (and smell) is all but nonexistent
Click to expand...

Hard to explain, but water straight from your RO is absent of beneficial minerals. I drank straight RO water for about 10 years. Then I read some articles that said you might be missing out on some of the benefits of drinking water, so I added the calcium/mineral cartridge after the RO and I was pleasantly surprised that I actually liked it even better than straight ro water. Just some food for thought. They are pretty cheap and last like 6 months depending on your consumption.

Didn't mean to hijack your thread