How To Basic DIY ATO 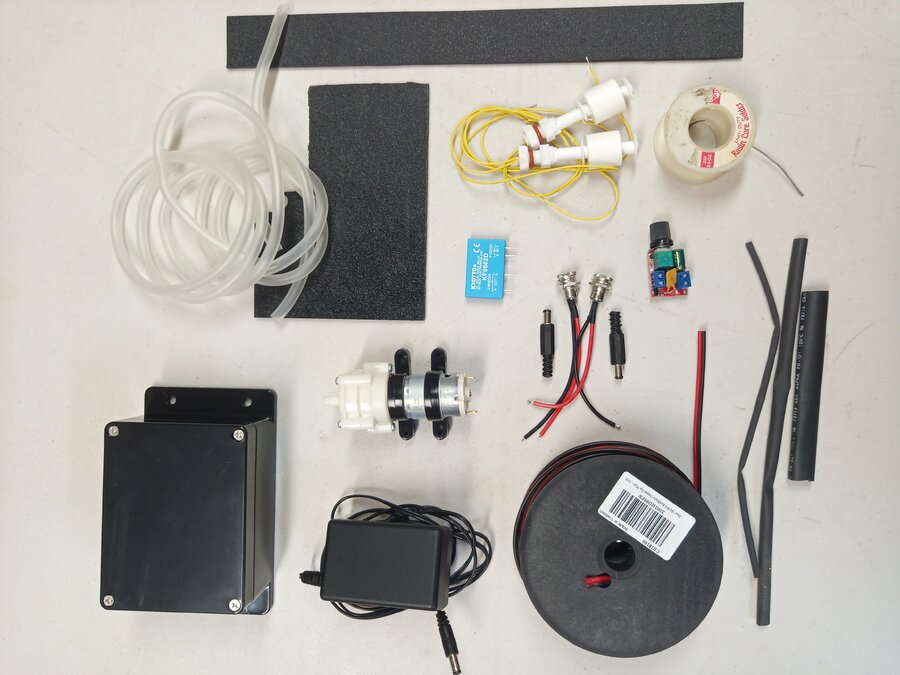 Note: I also found this kit with the pump, adaptor, wire and some hose. Not sure if it's enough wire and hose though. 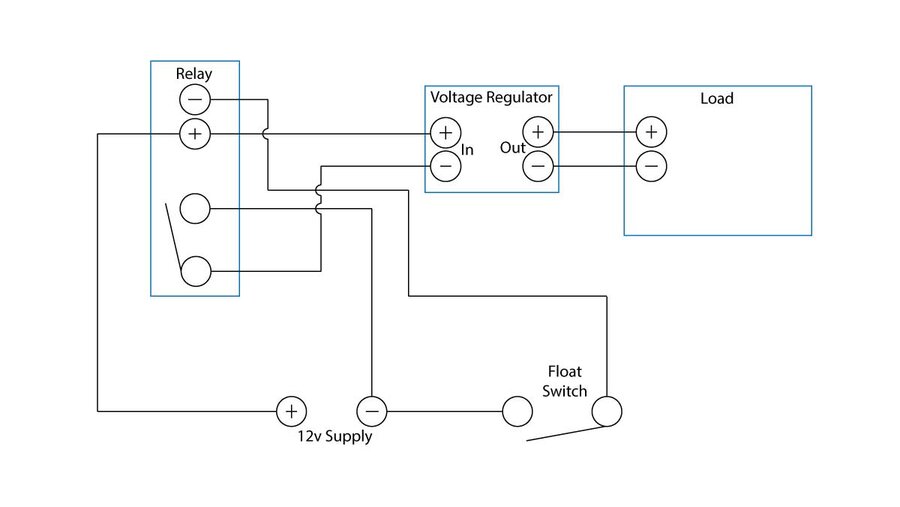 Drill holes for the inlet and outlet of the pump. When placing these holes remember to leave room for the voltage regulator and relay on one side or the other as seen below. 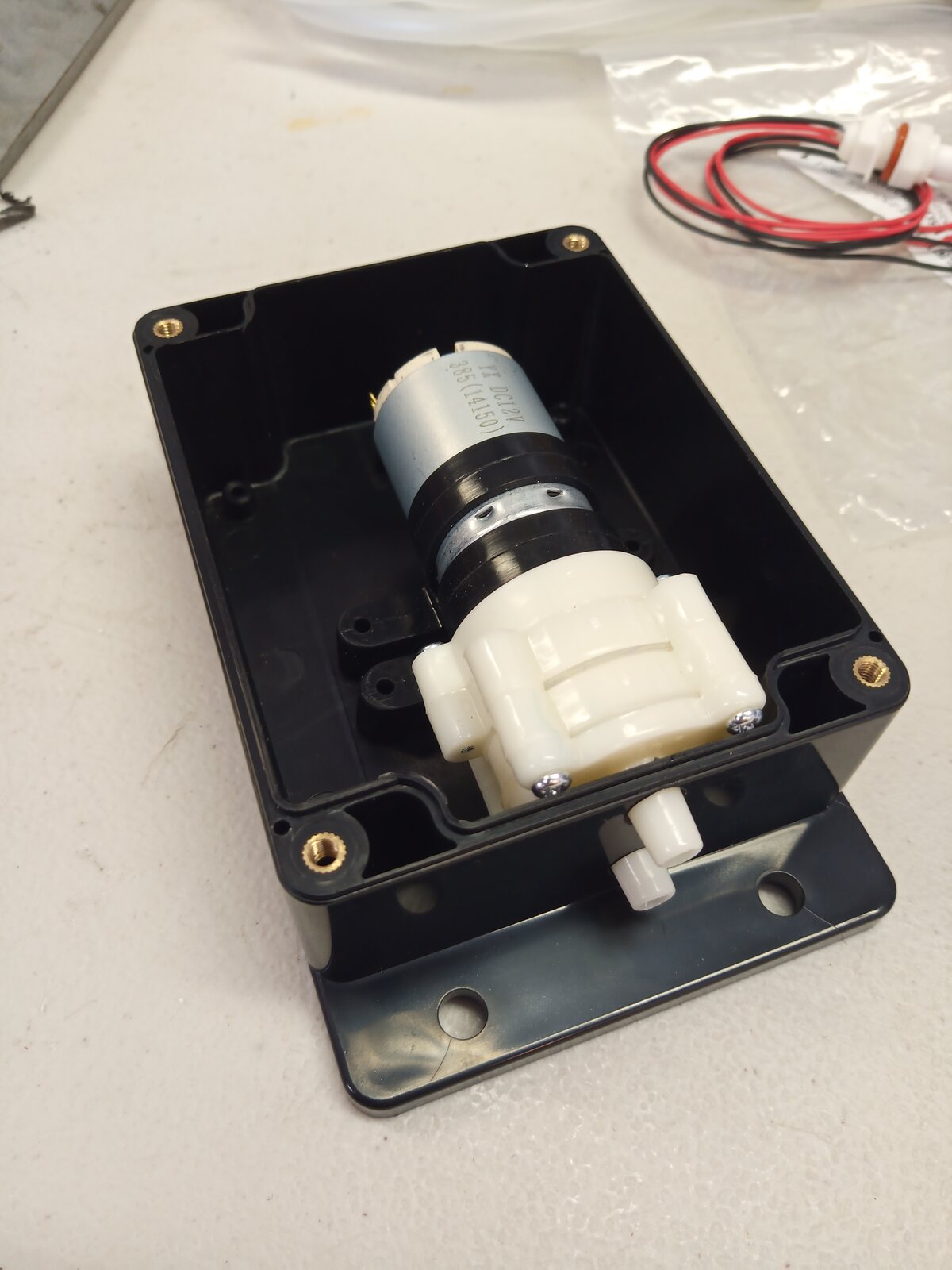 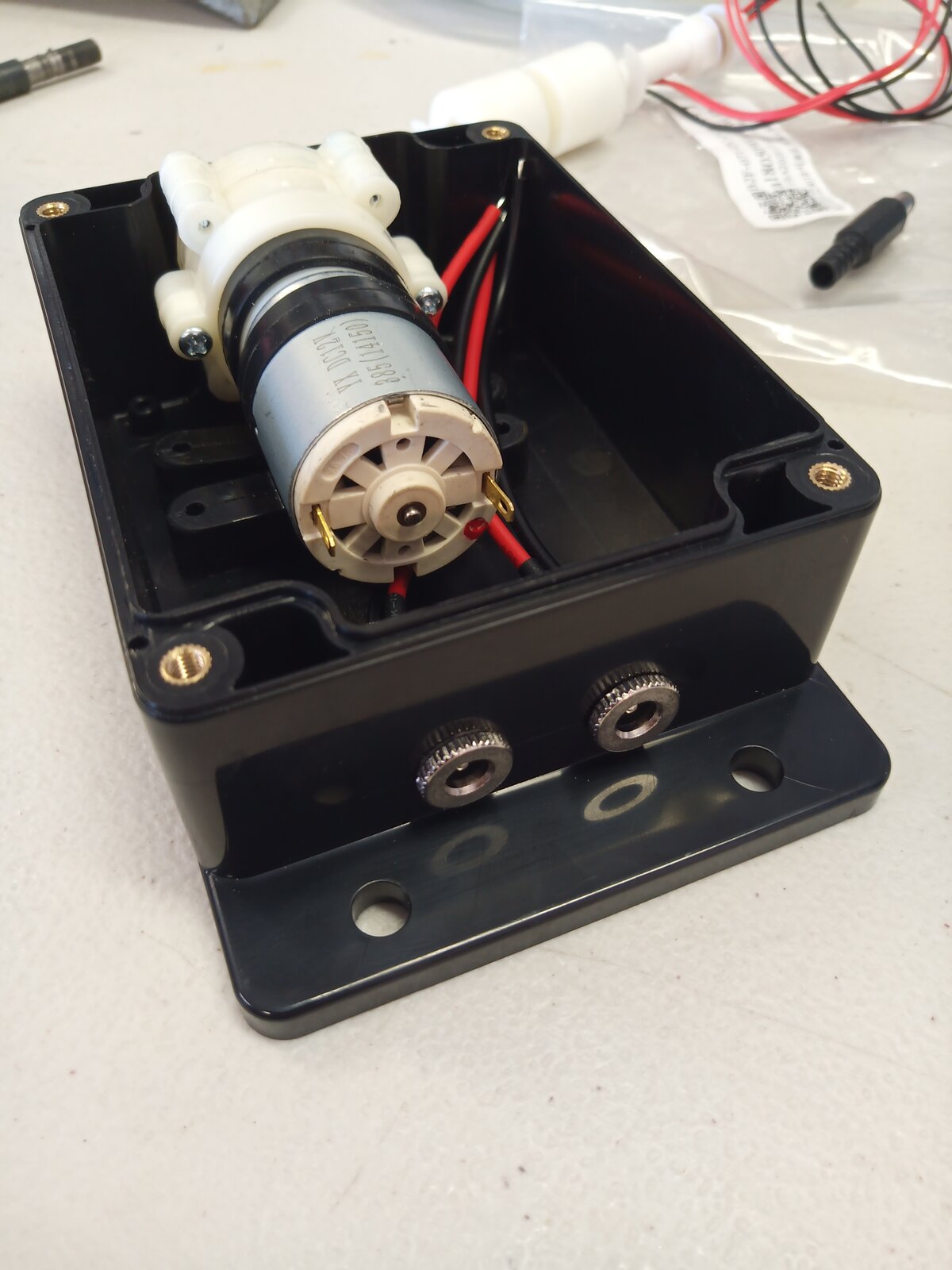 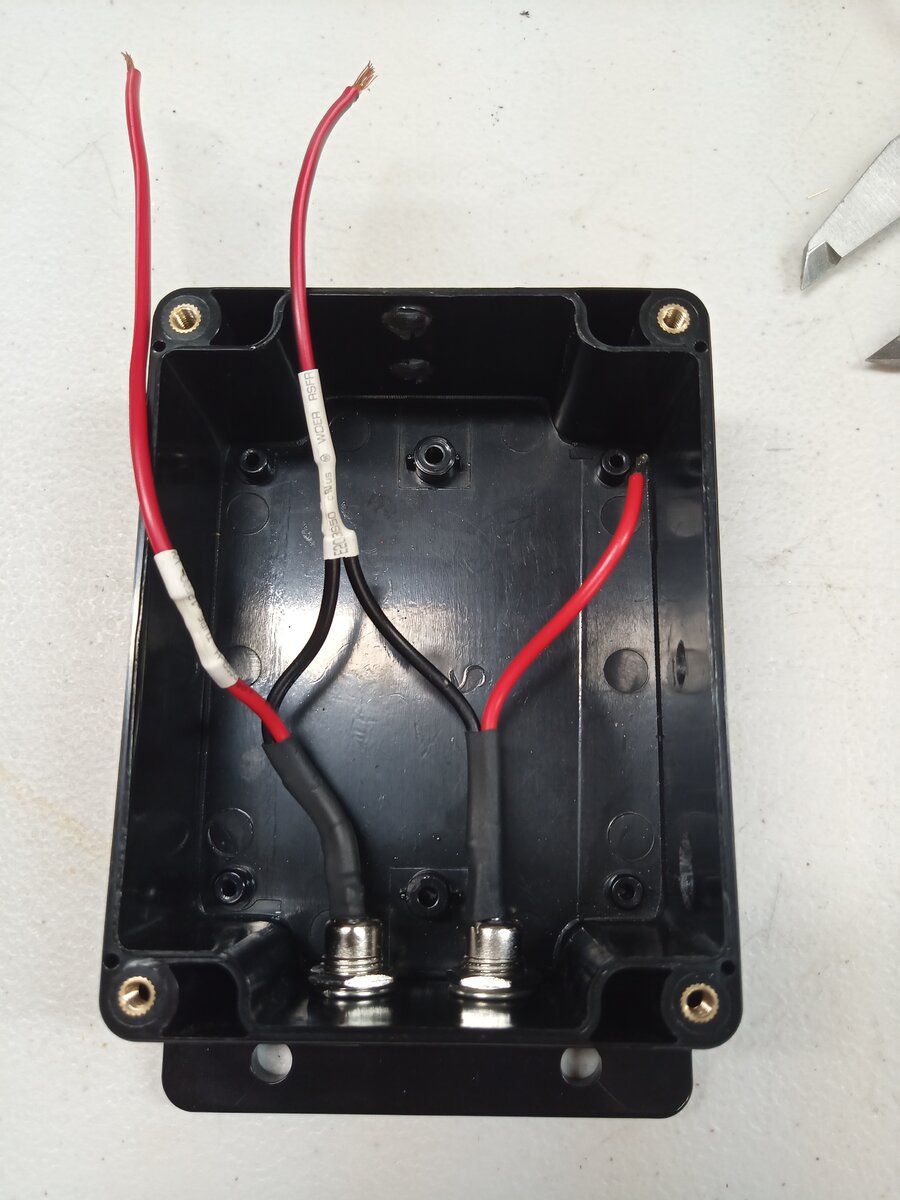 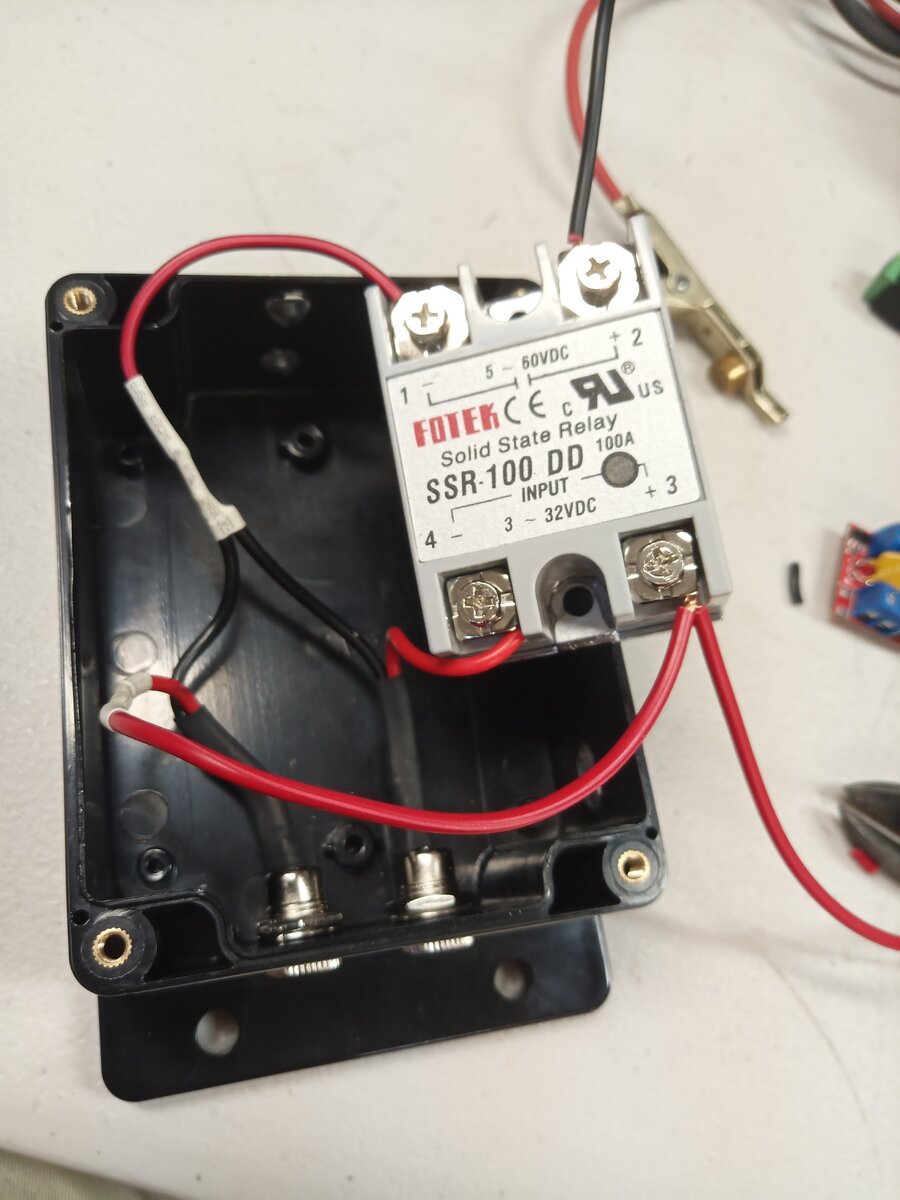 Now you can hook up your voltage regulator. 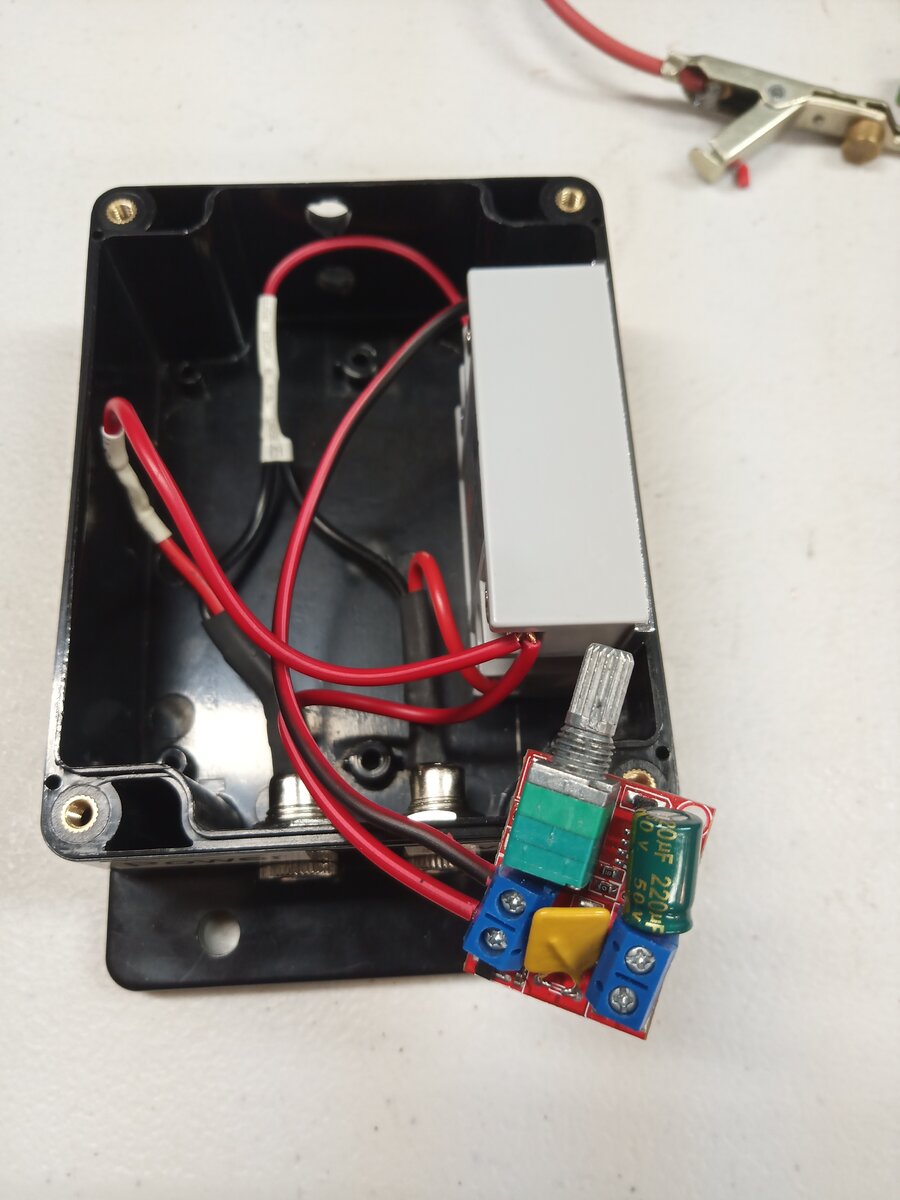 Solder leads onto the pump and plug them into the power out side of the voltage regulator. 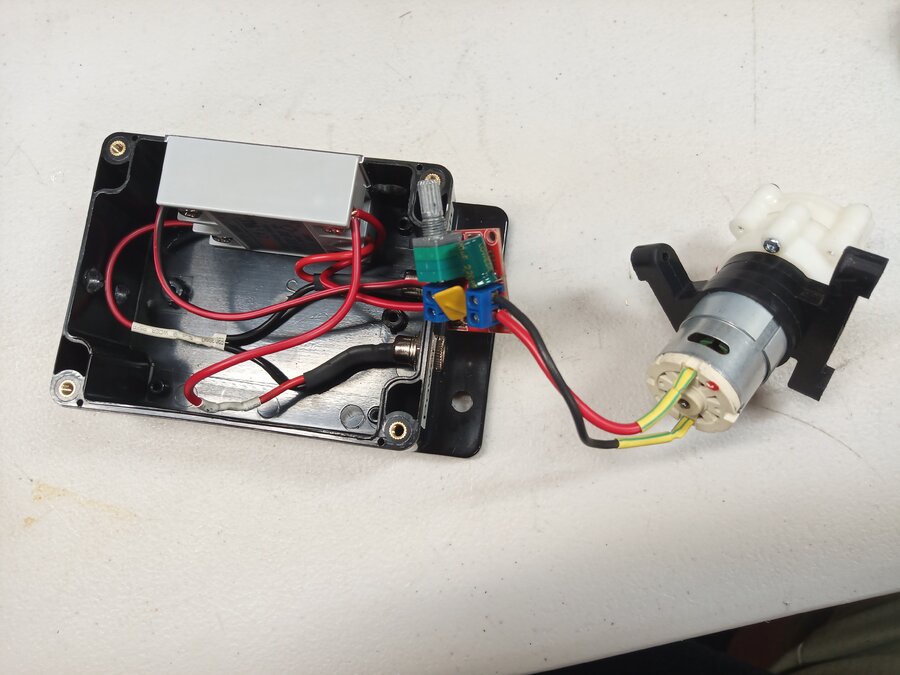 Mount your voltage regulator and slide the pump in and you should have something like this. 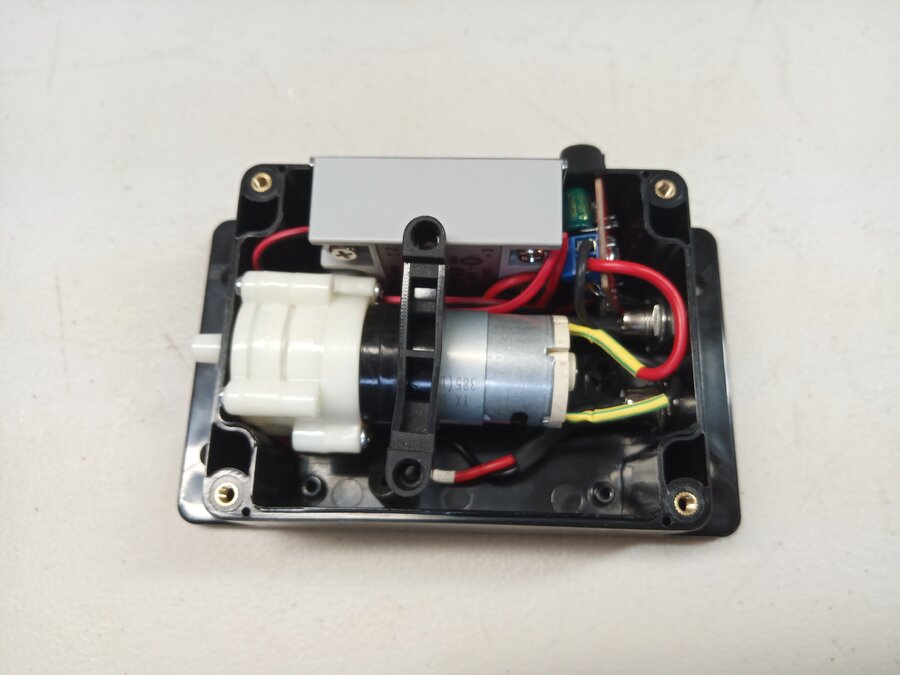 Now for the switch! Unscrew the male side of the jack you'll be using for the switch and solder some wire to it. Instead of a positive side and a negative side what we have here is an "in to the switch side" and an "out to the voltage regulator side" that is carrying the negative side of the current going to the pump that is interrupted by the float switches. You can use a tape measure in liew of a third hand. 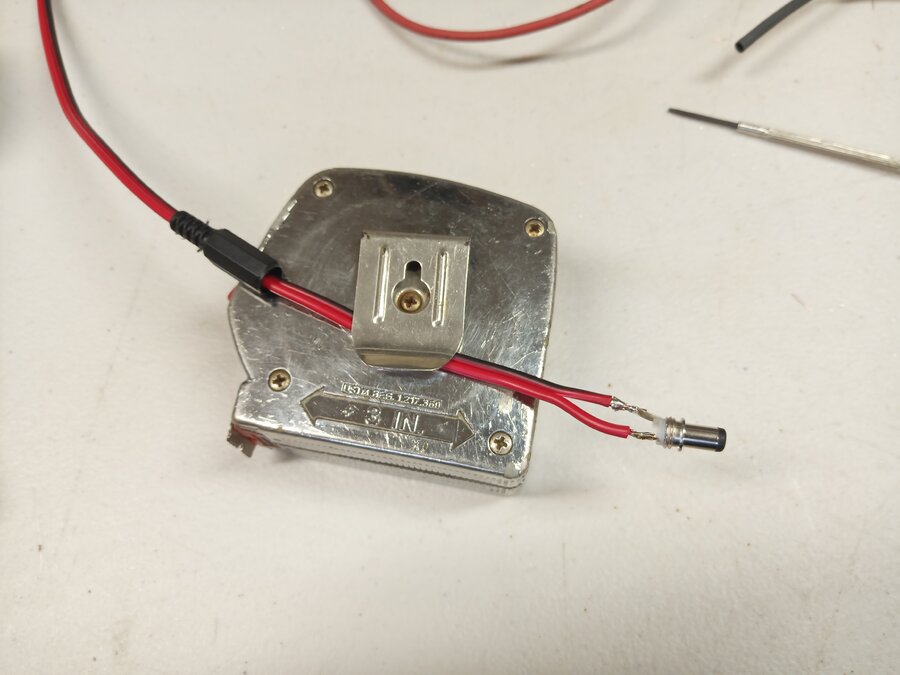 Now, this would be a good time to check your wiring and also confirm that your float switches are working before soldering everything together. Proper function of the switches can be confirmed by either checking continuity with a multimeter or plugging in the switch and power to the box and listen for the pump to turn on and off while you activate the switches. Great thing about these diaphragm pumps, they're self priming and can run dry all you want. Once you're sure it functions properly solder one side of each of the switches together then the remaining sides of the switch are soldered to your wire you put your male jack onto. 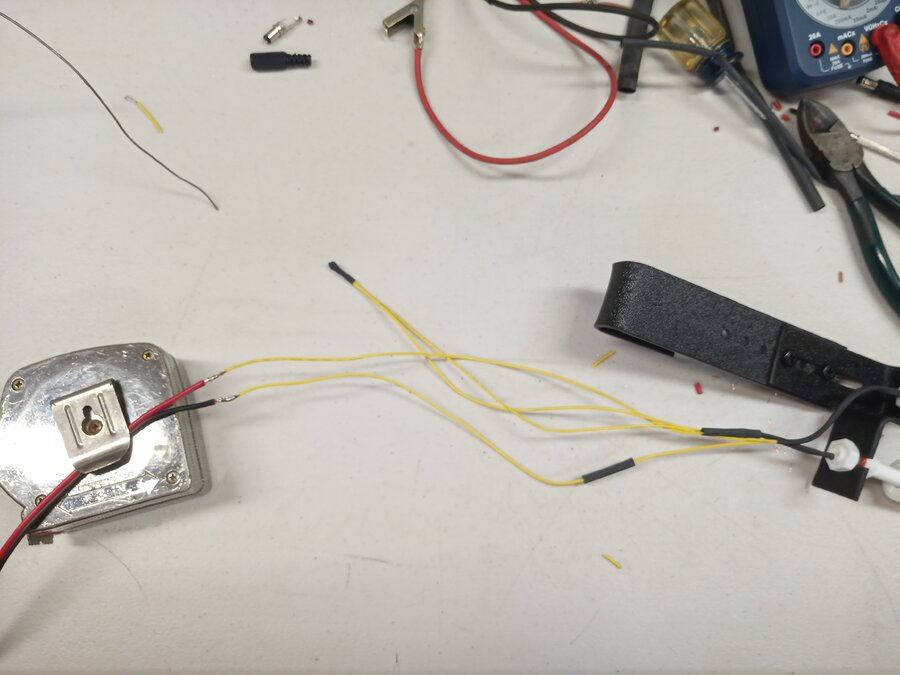 Then I like to cover up the ugly yellow wires with some shrink tube and it will hold the wires at the position they are at when they cool. 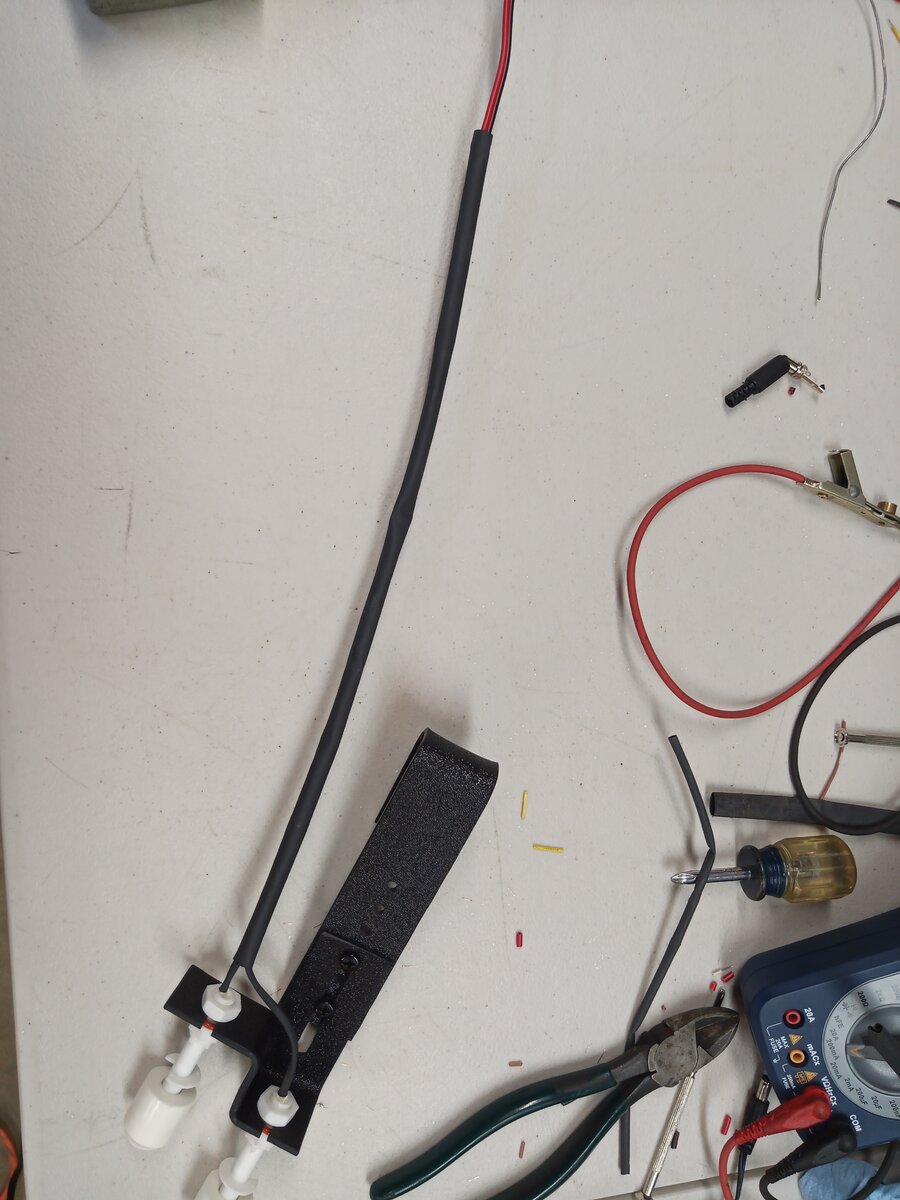 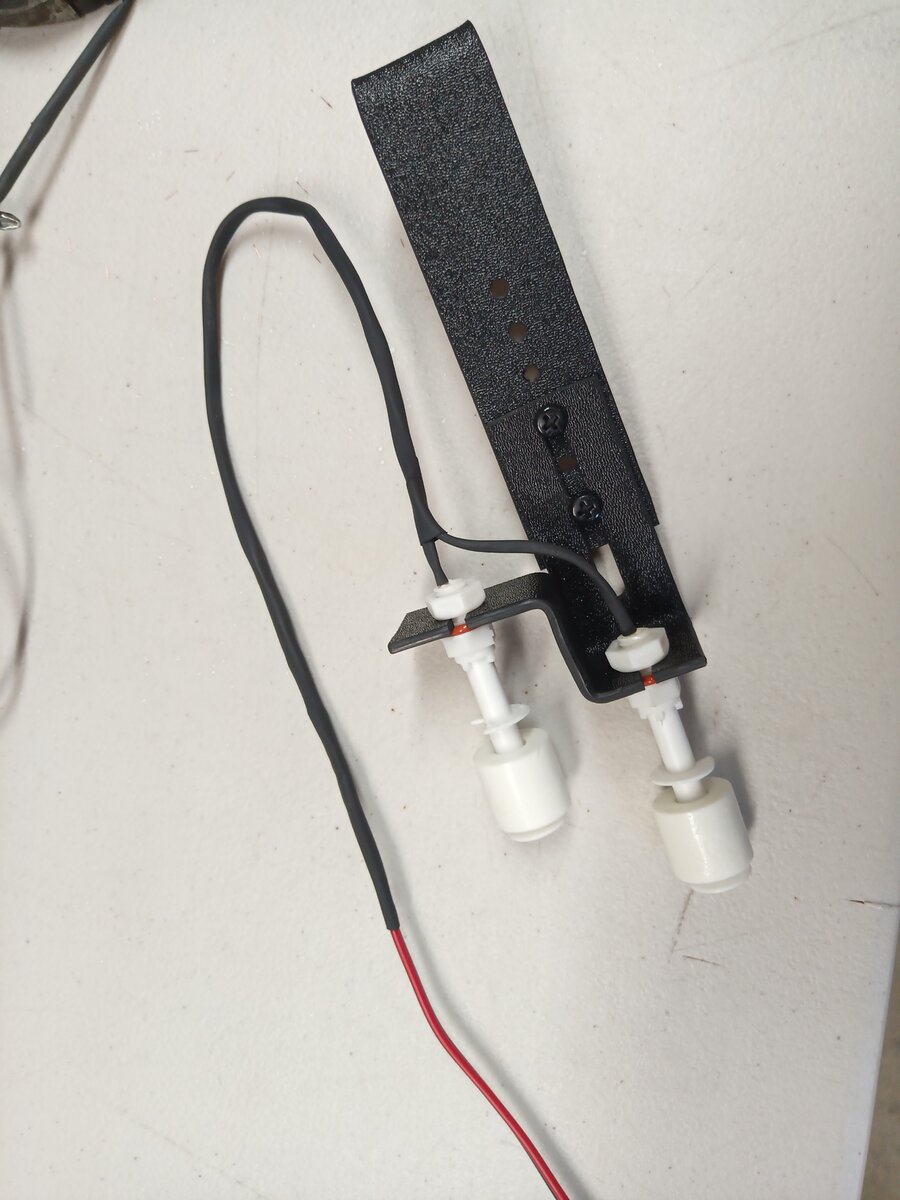 I ended up shorting out one of the switches during testing so when I wired a new one in I also added a large piece of shrink over the bolt side of the switch so water is unable to get onto the top side of the switch. When they fail that's how I've always seen it. So doing this will dramatically increase the life of these switches. But also using these longer switches makes it so the water wont even go that high when you turn the return pump off. 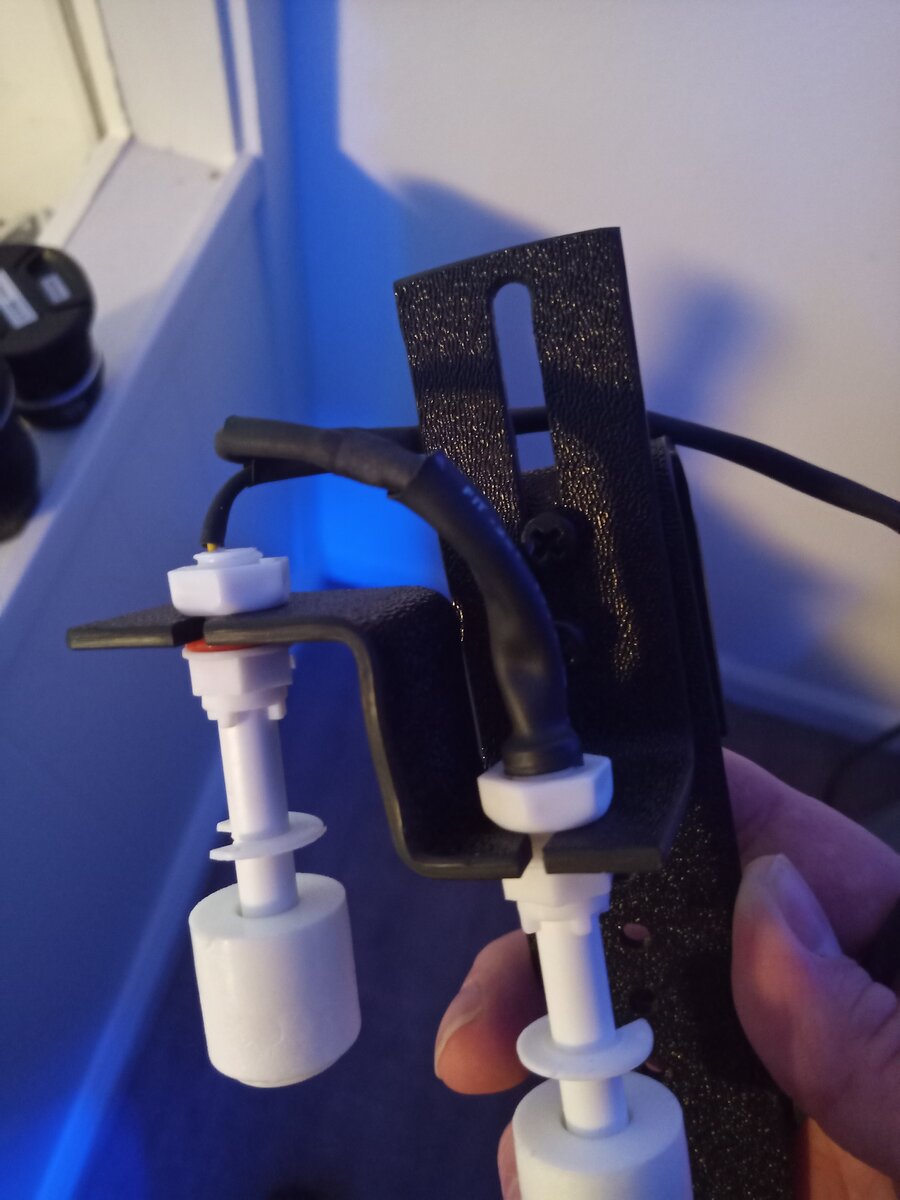 And finally the bracket. I happened to have a 1.4" wide strip of ABS for this part of the bracket but if you don't, plot it out on your ABS sheet, score it with your scoring knife and break out your strip. The bend was put into the plastic by heating the area I want to bend with the heat gun then wrapping around the rim of the tank I'm making it for. 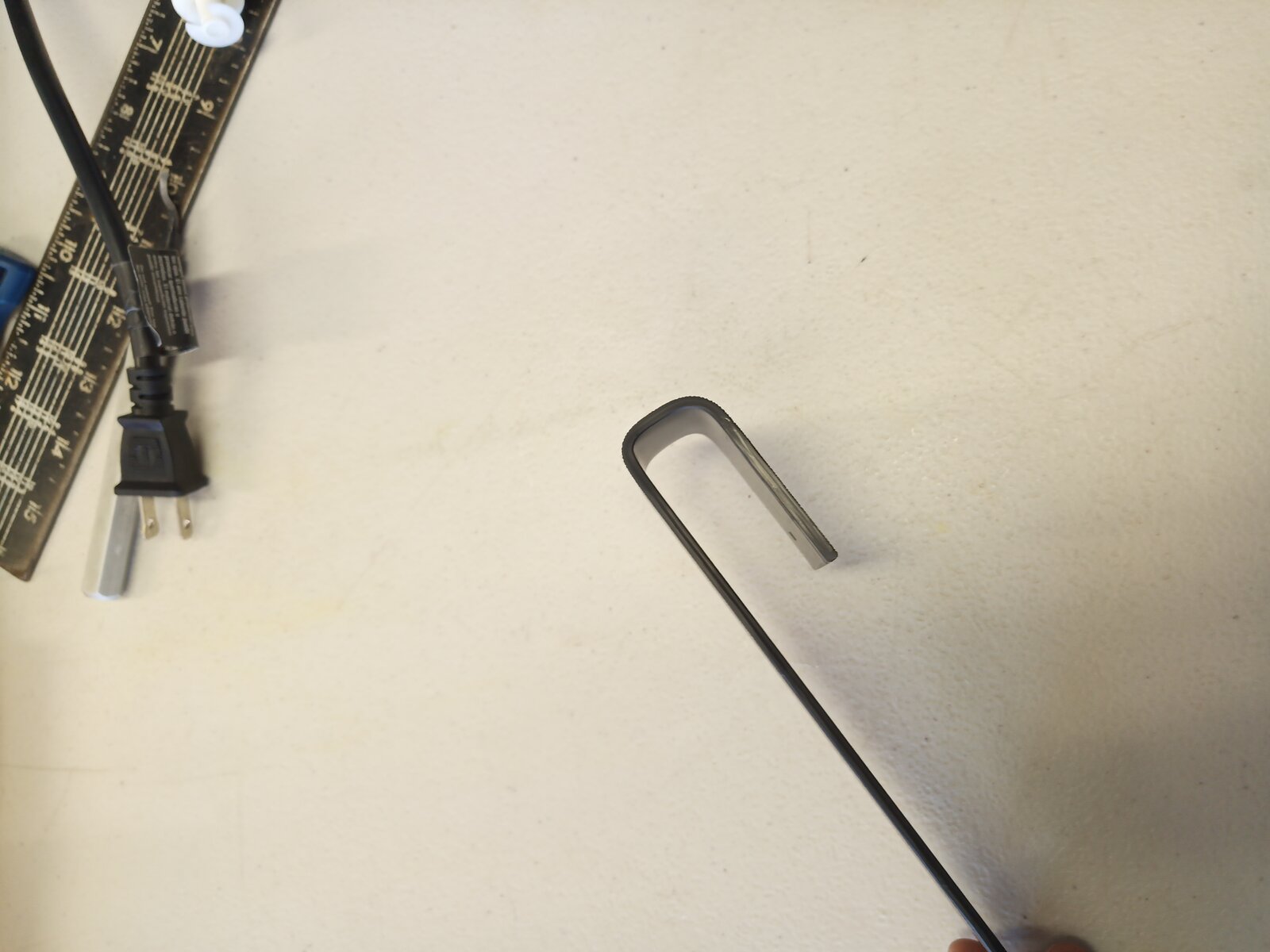 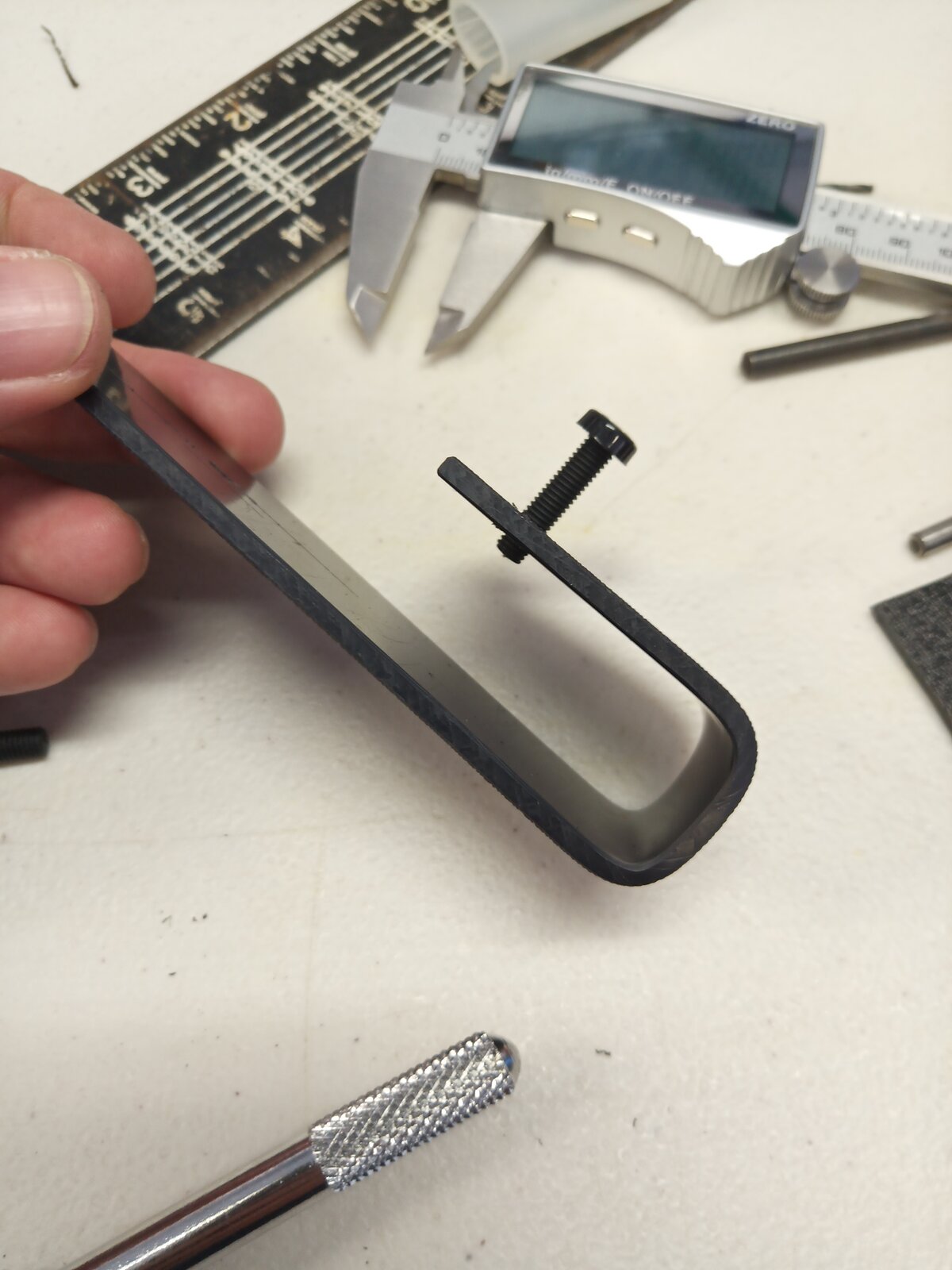 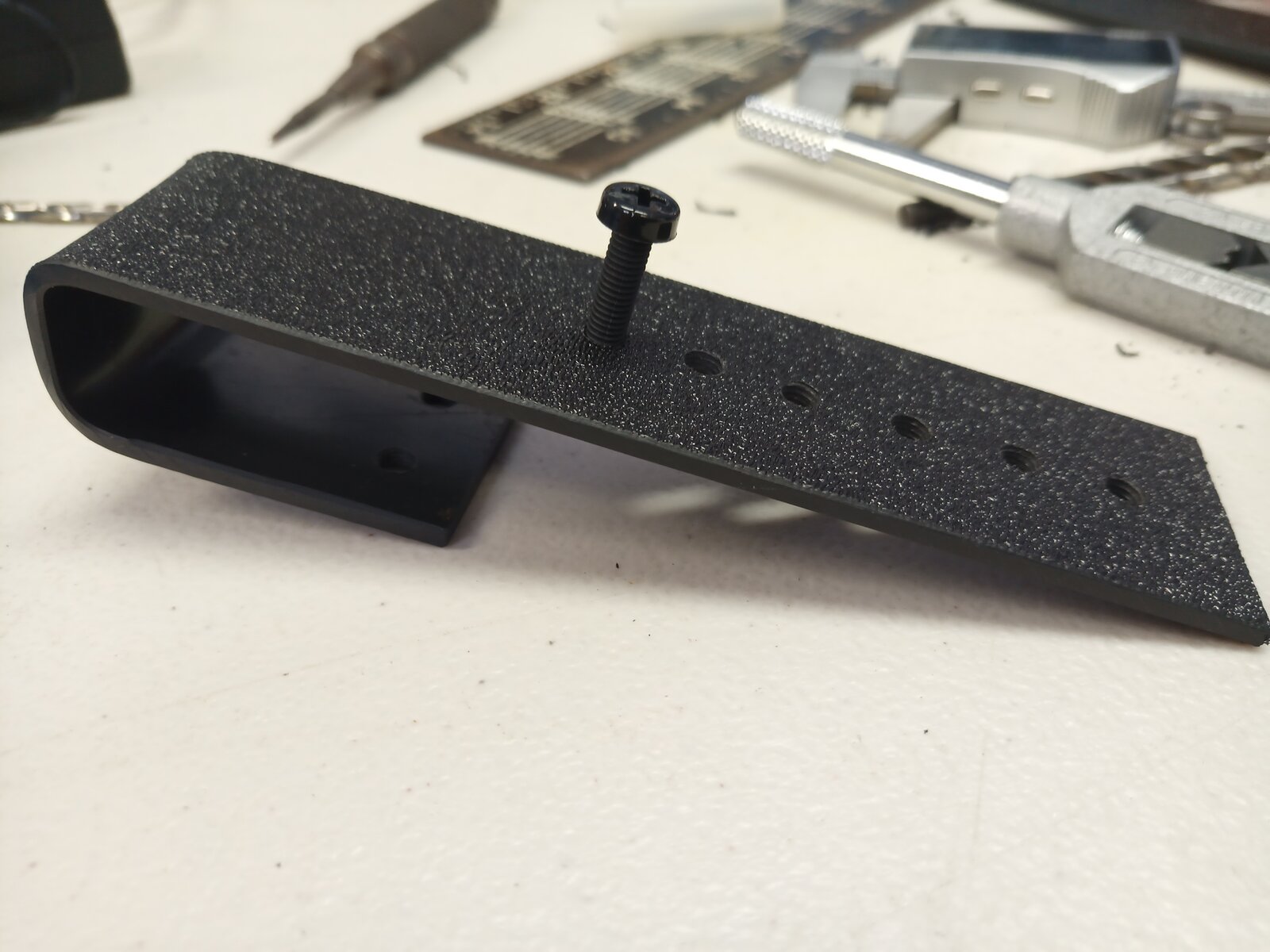 Next plot out an L shape for the next half of the bracket. 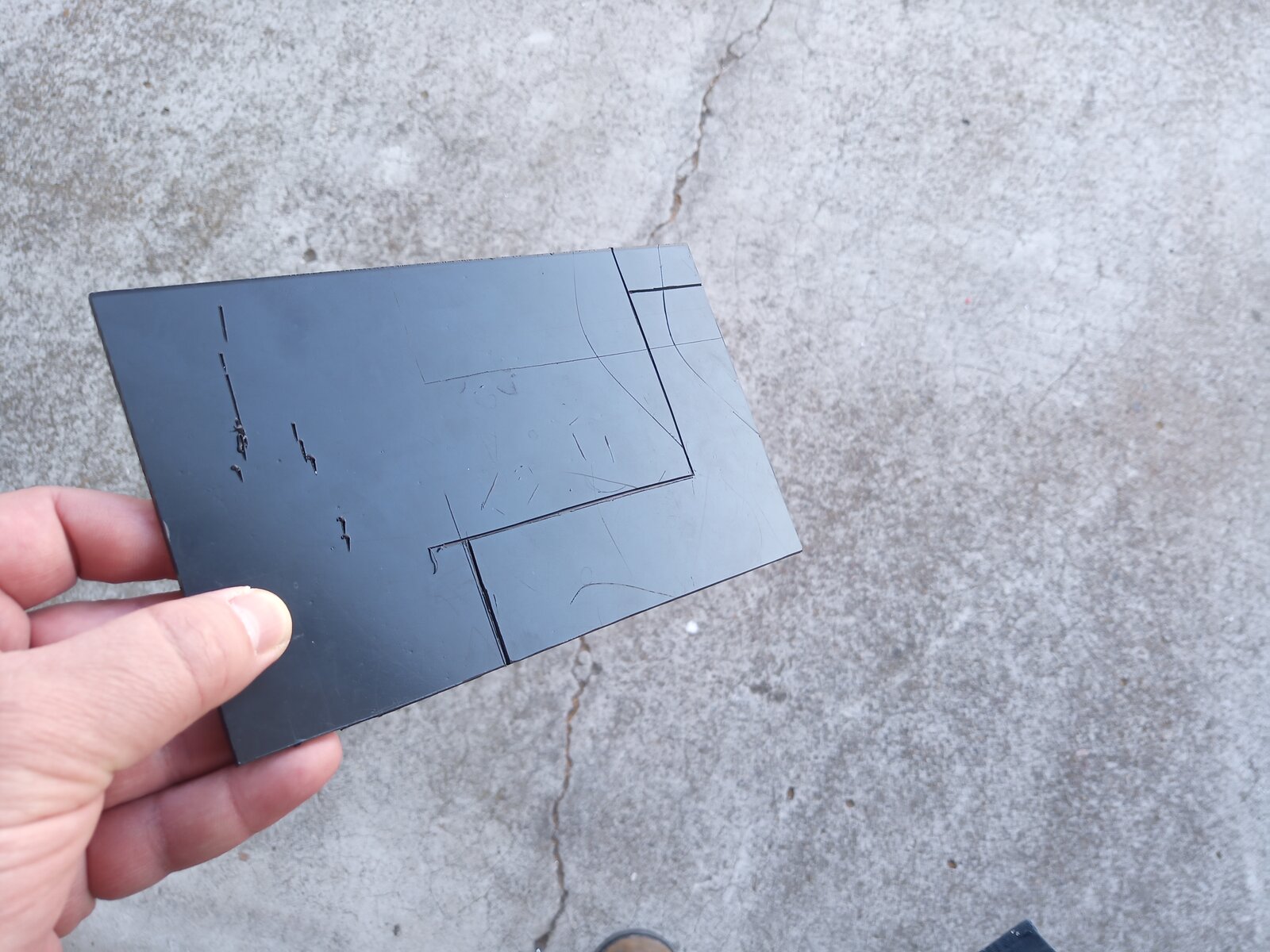 Drill the holes for the float switches and create the adjustment slot for mounting to the other half of the bracket. The slot is achieved by drilling two holes and cutting out the slot by scoring and scoring until you can push it out. 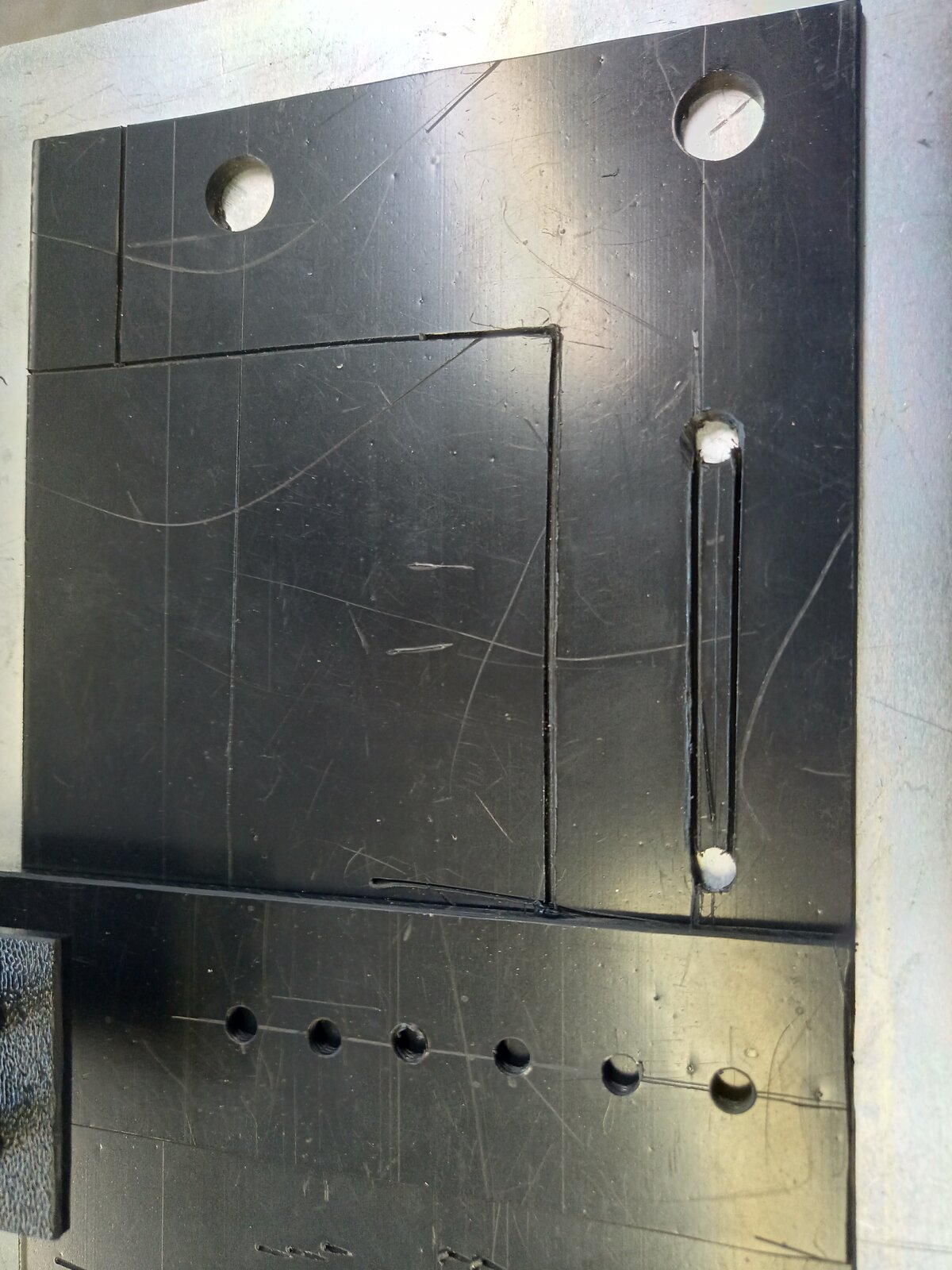 Clean it up with your files and deburring pen and you should end up with a part looking something like this. 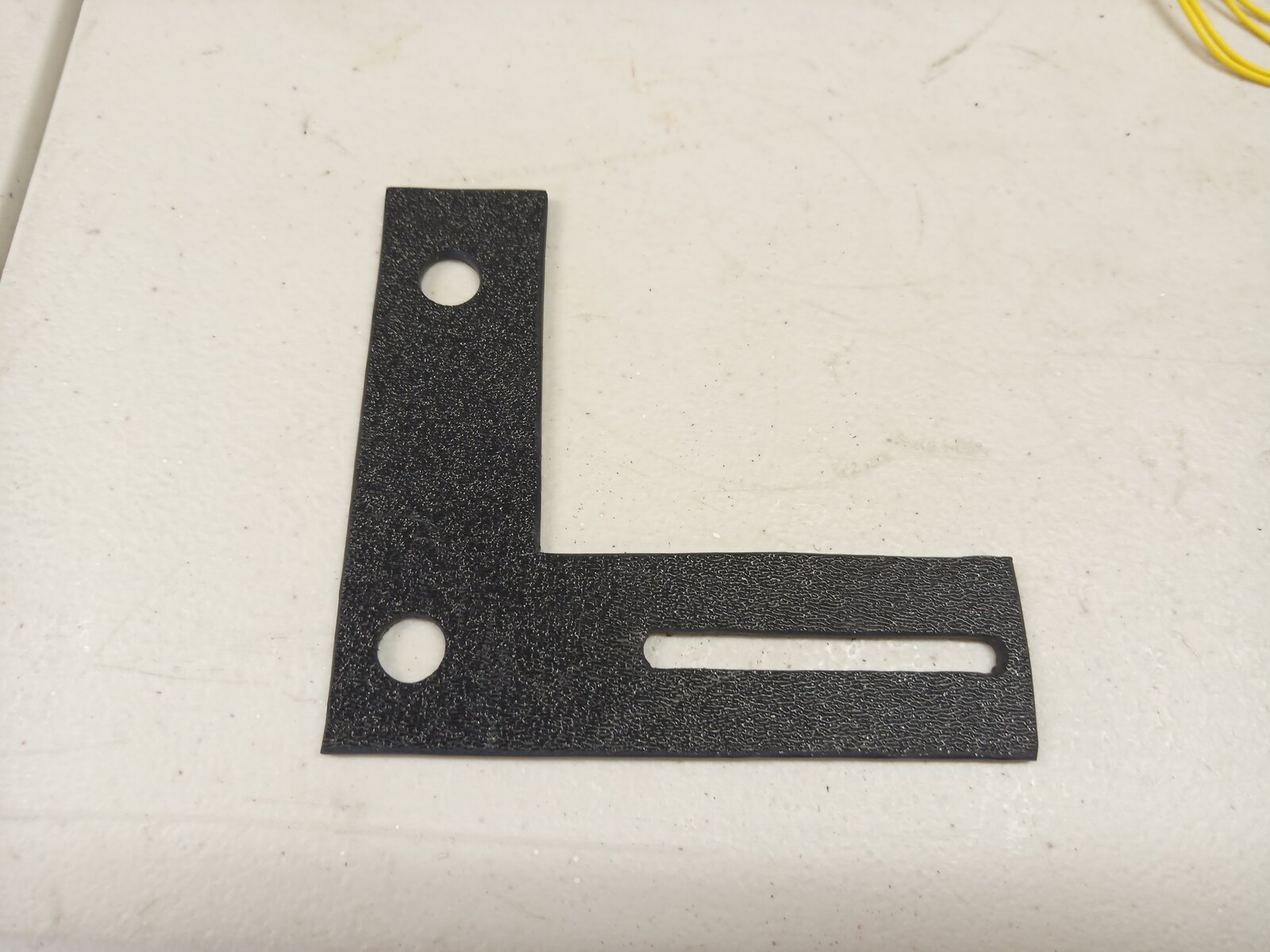 The hole for the float switch is also slotted so you can fit the wire in when you mount or unmount the switch from the hanger. 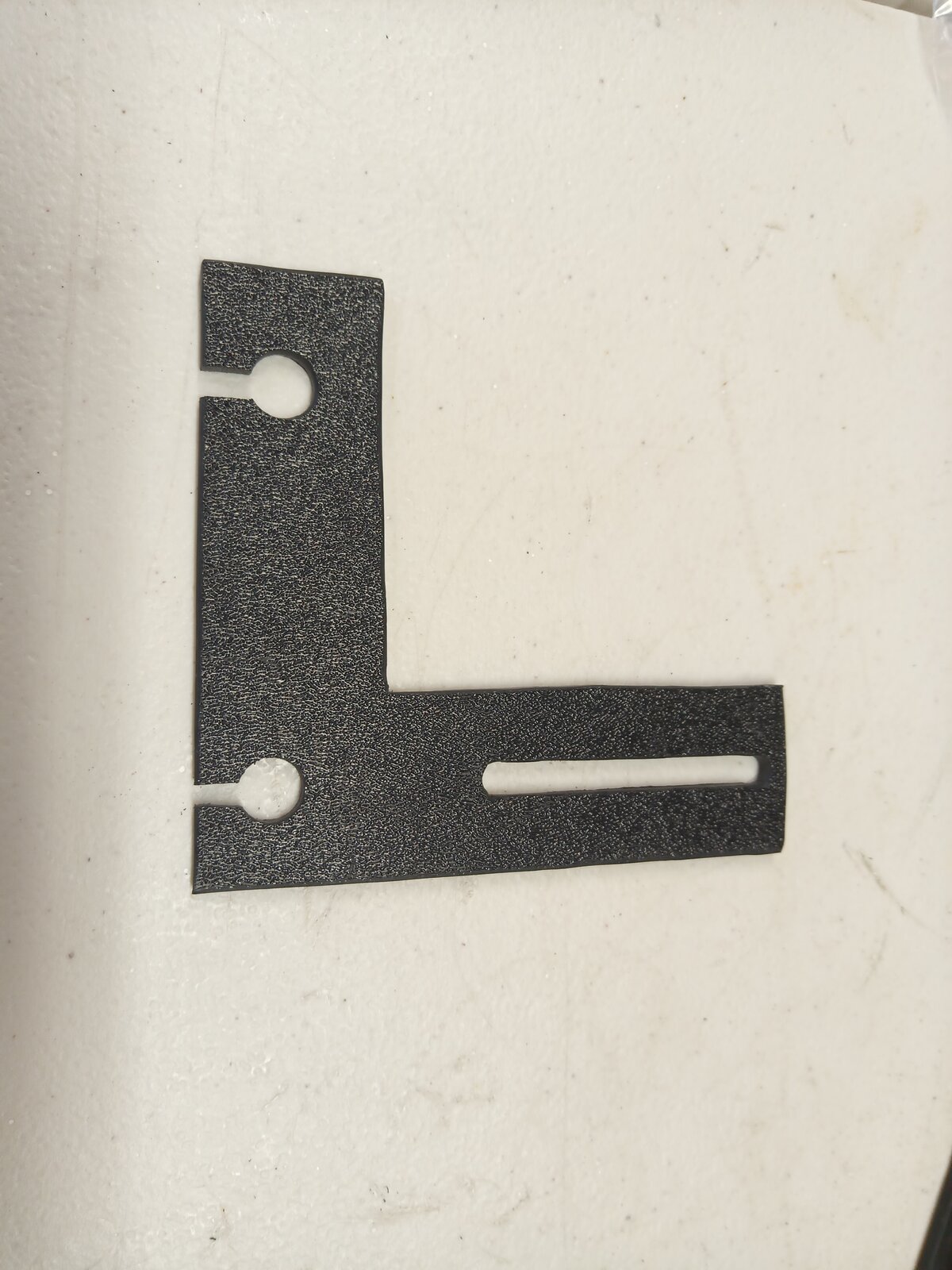 Then give it a 90 degree bend. 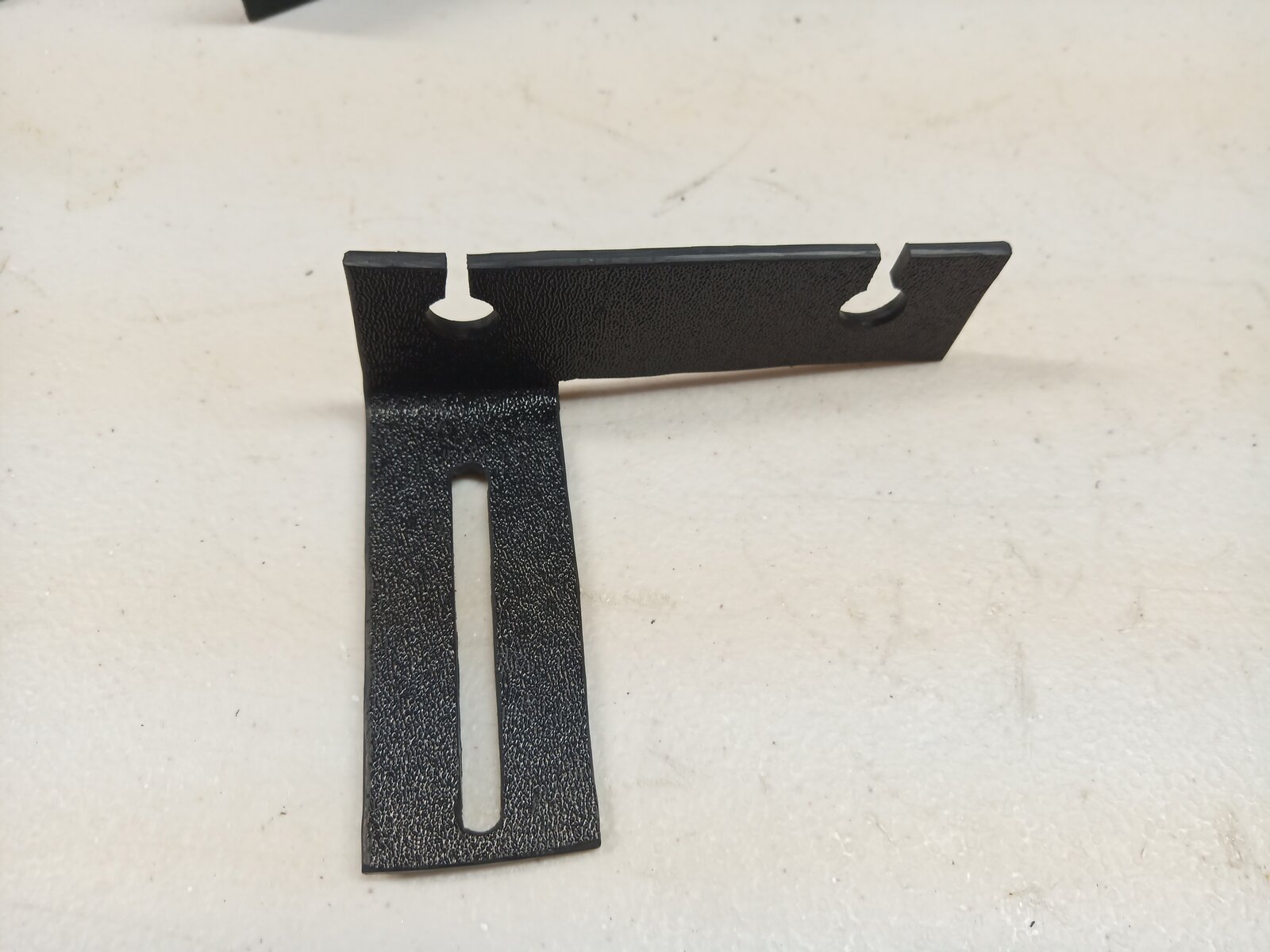 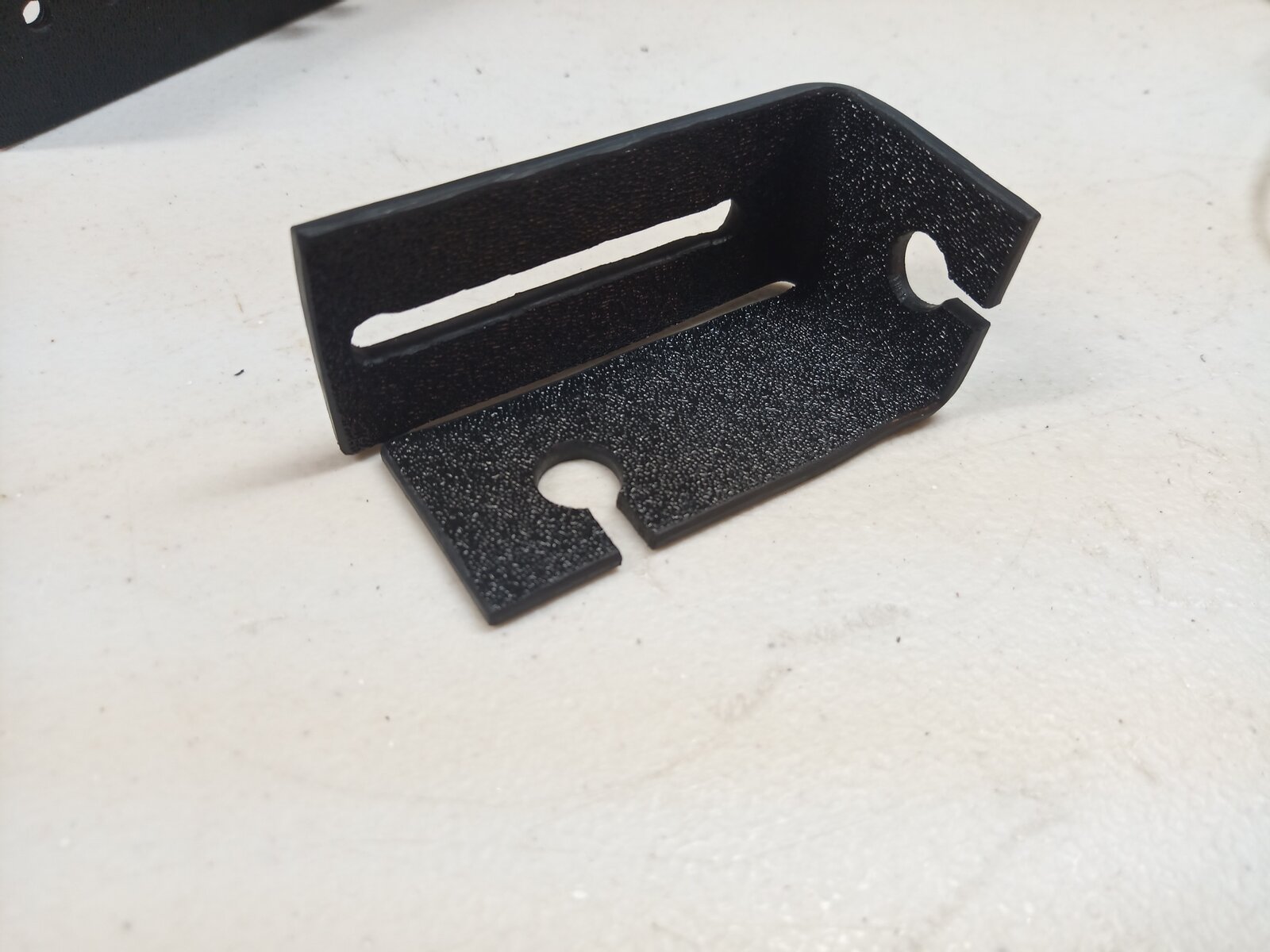 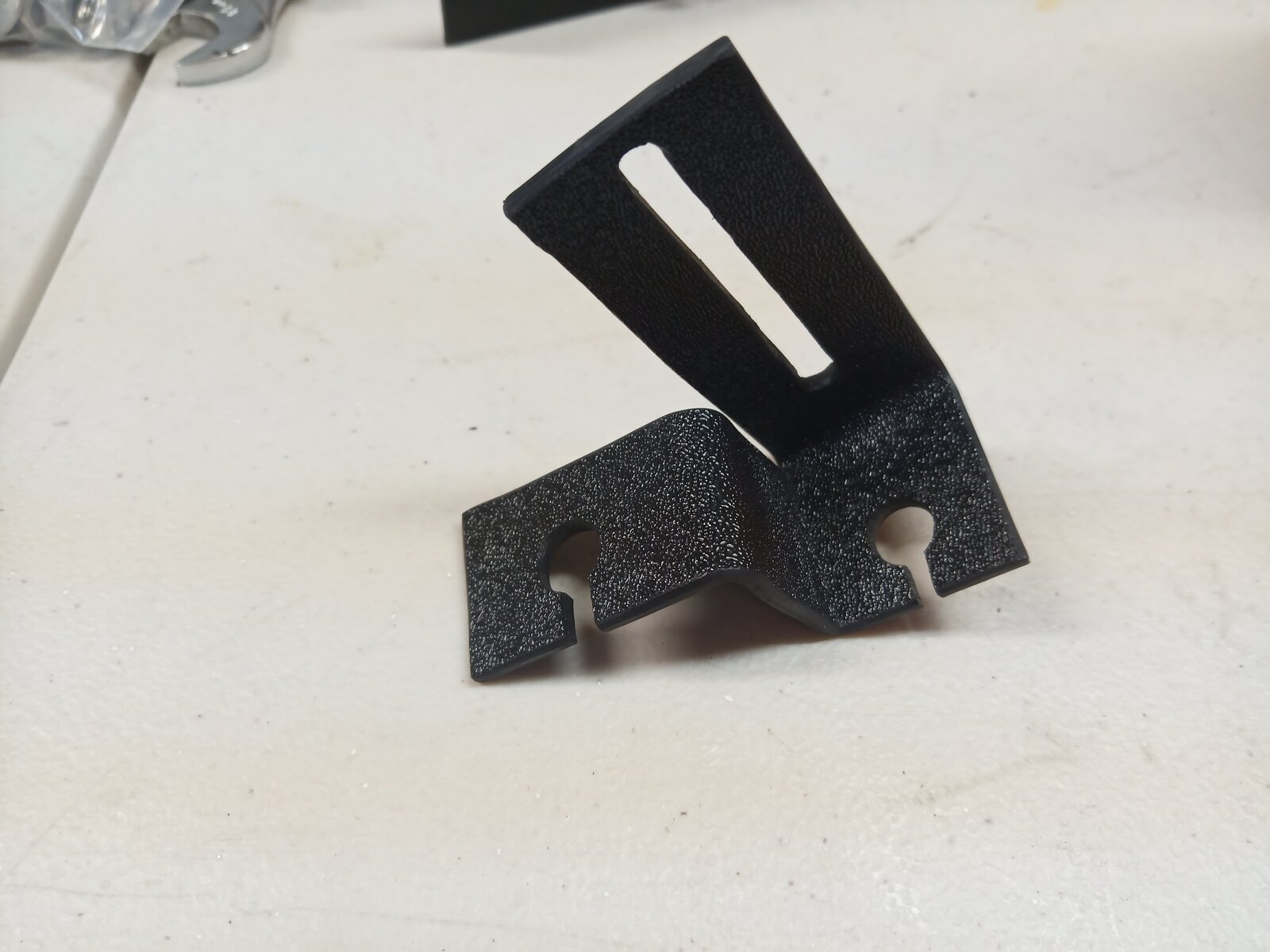 And you've just made an ATO! 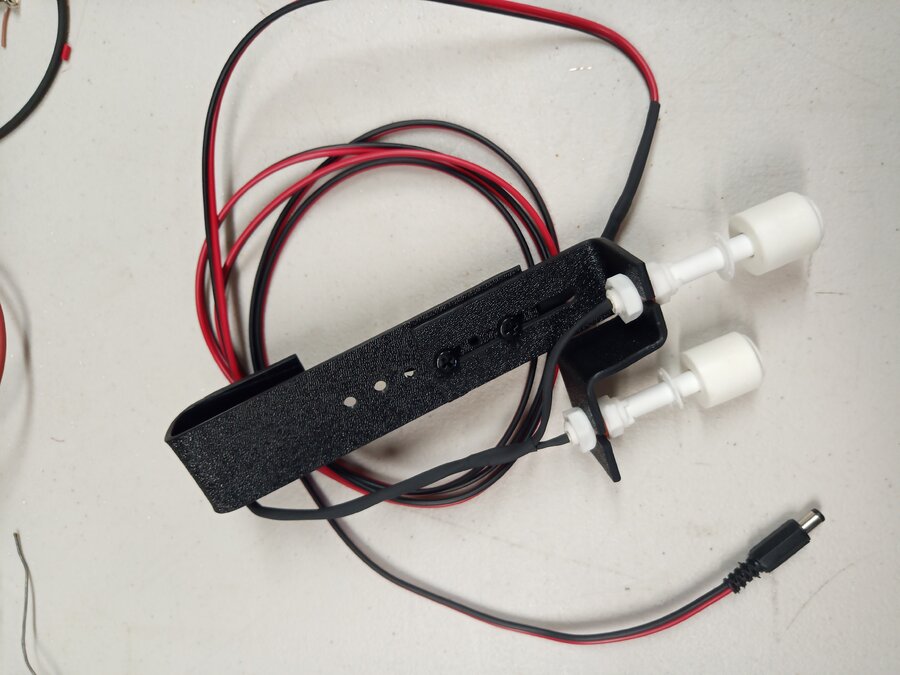 Probably a good idea to also label the jacks and inlet/outlet of the pump.
Last edited: Apr 5, 2021

This is amazing! I will feature it later today on the Homepage.
Check out links below for more info:

Looks like a fun project - do you have a parts cost estimate? DIY for DIY's sake is always valuable and fun but I'm curious.

don_chuwish said:
Looks like a fun project - do you have a parts cost estimate? DIY for DIY's sake is always valuable and fun but I'm curious.
Click to expand...

If you have to buy every last thing on the list it's over $100, but most people are going to have some of these things already. I just had to buy the pump and relay, everything else I already had so my cost to build was like $20. There are also ways to cut corners. You don't really need to have power and switch jacks, they could be hard wired and just drill a hole for them to come out of the box. You don't need to use a nice project box, one of my ATOs lives in a tupperware. But also, if you buy everything on the list you'll have everything you need to make two or three of them, minus the pumps and relays of course.

/Also this thing comes with the pump and tubing, IIRC most off the shelf ATO's do not so you've also got to factor that cost in when comparing.
Last edited: Apr 5, 2021

The JBJ Nano is $99 with a pump and the XP Aqua Duetto is $119 with a pump. So yeah if someone has stuff lying around you could come in well under that. But even more important is that it's fun do DIY.

don_chuwish said:
The JBJ Nano is $99 with a pump and the XP Aqua Duetto is $119 with a pump. So yeah if someone has stuff lying around you could come in well under that. But even more important is that it's fun do DIY.

Yeah and I forgot about the kit that includes pump, dc adaptor etc. If someone buys that and the rest of what's needed it comes out to $80 not counting ABS/solder/shrink. If you're going to do this you likely already have shrink and solder and the ABS can be had for a couple dollars at the local plastic sheet distributor. So call it ~$82 if you have to buy everything.

Great write up on a DIY ATO.
This place is a great source for ATO parts. Also there are other pump options available. I have bought parts from them.

KenB said:
Great write up on a DIY ATO.
This place is a great source for ATO parts. Also there are other pump options available. I have bought parts from them.

Thanks! Yeah, those can be an option. Though, I think you can get a lot of those same parts elsewhere for cheaper. The float switches for sure but $5 for an AC adaptor is a good price. Also I would caution that the relays they use are mechanical. I much prefer solid state for this application as well as diaphragm pumps rather than the impeller pumps they sell but for someone that doesn't want to make it themselves it's the cheapest way to get an ATO for sure. They do have a bunch of RODI related stuff that seems like good prices and only $4 shipping on small stuff. That's pretty reasonable!
You must log in or register to reply here.
Share:
Facebook Twitter Reddit Pinterest Tumblr WhatsApp Email Share Link
Top