DexterB said:
I had some fish on your list in my previous tank & a few in this one. I’ll look up some pics and send them to you,
You make have seen this already but check out this to see CBB head twitch - they do this to beg for food,

Well it's been quite the journey with these two fish. Especially the CBB who went on many hunger strikes throughout QT. But after 14 days of CP and 30 days in observation with black molly, they're finally in their permanent home. It's been a week now and they've setteled in just fine. In fact...
humble.fish
Click to expand...

if it’s not terrible for a CBB in my tank I’ll get one, ditch the tang idea and get a blenny to deal with algae. Let me redo my Pinterest board to visualize it lol
- Arin

Anyone know if a lawnmower blenny can coexist with a tailspot?
- Arin

phatduckk said:
Anyone know if a lawnmower blenny can coexist with a tailspot?
Click to expand...

In a bigger tank, yes. But in just a 75 I suspect they will eventually get into it. I've had problems housing both in a 40 breeder.
Check out links below for more info:

the tank is too small for 2 blennies in my opinion. also, if you get lawnmower doubt you can have any gobies like dracula or firefish. mine at least didn’t like any similar looking fish.

I have a White Tailed Bristle Tooth Tang (WTB). I think they are a reef crest species that likes to swim. It has never been happy in my 5ft tank.
They also have an extremely well developed scalpel. It likes to use it... 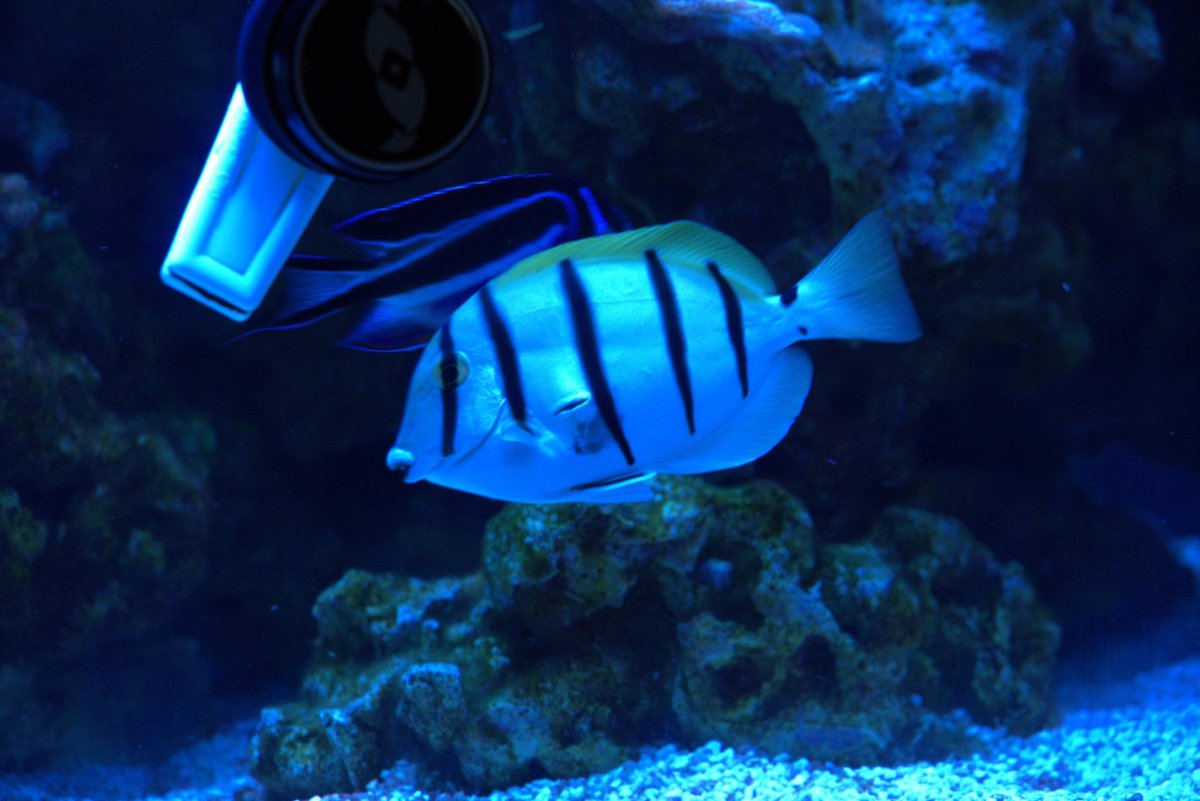 my favorite tang!! simple and beautiful!

thanks folks. lots to think about here!
- Arin

phatduckk said:
I'm open to any other suggestions.
Click to expand...

How about a bag grab at your nearest Petco

Humblefish said:
P.S. All dwarf angels nip at corals eventually. It's just a matter of which corals they prefer and how bad the nipping is. Sometimes it's a situation you can live with if you aren't too concerned with rapid coral growth.
Click to expand...

FAKE NEWS! Bobby has no idea what he is talking about. I've always said Bobby is no good! I will add that I find the Atlantic Pygmy Angel to be a great companion for coral tanks. They tend to stay true to their herbivorous grazing nature and leave the corals alone. In a 75, you can do a mated pair, which IMO is better than an individual. They do a mated dance at sunrise and sunset lighting effects.


Humblefish said:
One of the "Bristletooth Tangs" from the Ctenochaetus genus would be best suited for a 75 gal. Tomini, Kole, Two Spot or Squaretail.
Click to expand...

I agree with Bobby here, he is one of the smartest fish guys I know. For a 75 or other 48x18 format tanks, this is the only tang I would recommend. Others will recommend yellow tangs and it can work. The Tomini family is a better fit though.

These fish are very reclusive and probably not a good fit in your tank. You would want the rock work more closed off and probably fewer fish to encourage them to come out. A lot of money for a fish you will rarely see. Would a cool fish for a cave like aquascape though.

Ya the only tang im seriously considering is a White Tail which is a Ctenochaetus. I think I have to decide on the "big fish" (I just want one) and then fill out the rest after that.

My current contenders are a White Tail Tang vs a CBB. If I get the tang then I shouldn't get a blenny and other compatibility calculations (hawkfish vs tailspot blenny etc)
- Arin

The WTBT is restless and somewhat aggressive. Very few shy fish have survived in my tank. Ignitus anthias never ventured out to eat; bimacs are doing fine. Firefish run and hide every time the tang sailed buy. It's not that the tang really ever attacked them it is the constant rapid swimming; he did slice the clown almost in half but that clown is a jerk. The WTBT is very beautiful especially when he is aggressive; gets really dark and the tail turns almost paper white.
The CBB is just the opposite. Slow and deliberate. The convict tang is very mellow so if you need a worker they are a good choice and really under-rated; they do swim fast.
I suspect that dwarf angels that come from the reef crest are more reef safe. The cherubs and their allies are probable safer than most but they are belligerent. I had a captive bred flame that never misbehaved badly.

phatduckk said:
My current contenders are a White Tail Tang vs a CBB. If I get the tang then I shouldn't get a blenny and other compatibility calculations (hawkfish vs tailspot blenny etc)
Click to expand...

Not familiar with that specific tang so I would follow the guy with a tang as his avatar. I do think a tang will serve you better than any butterfly as far as utilitarian purposes go. I dont think you will have issues mixing the blenny with the tang unless you keep your tank spotless.

On the hawkfish, mine decimated my clean up crew and gobies. I have the Falco hawk. I like my hawk, but if you want to display an assorted clean up crew, pay a little more attention to which hawkfish you get.


AcanthurusRex said:
The cherubs and their allies are probable safer than most but they are belligerent.
Click to expand...

I had to my laptop to another room so they would not see this comment I would say this is applicable to almost all of the Atlantic fish relative to their Pacific counterparts. In my tank, the cherubs are my "show fish" so I don't have issues. Not sure what would happen if I tried to add a tang, but I suspect in a 4-ft format, it would not go over well. The only butterflies I like are not reef safe, so that will not be an issue unless I decide to forgo corals.

No, no...I'm no expert. For tangs 4Ford on R2R is the one to follow. I only comment on my observation and reading; and it's a cool photo of allegedly the meanest tang species.
I currently have a biota yellow, WTB and the convict tang. All are the smaller species of each genus. I think WTB tang is a poor choice in spite of it's size simply because of it's restless nature. It a sample size on one.
I have kept an argi before; they are very hardy. I would probably get a flameback; they used to be very rare in the hobby.

My WTBT was peaceful for about 2 years, turned aggressive after that in my tank. I’ve mentioned it somewhere in another thread. It was so aggressive it was trying to kill fish that should not have been a threat/competition. The only fish it was not going after were my Gem Tang & my Blonde Naso . I know another hobbyist that had a WTBT that was peaceful.

To me a fish trap is a great investment. You can use it also as a acclimation box. I got one large enough so that I could place a small critter keeper inside it. Why? Most fish you lure into a fish trap using food. Some fish too smart to do that. The WTBT could peck off rocks to eat. So I put my very chill Venustus angel in critter keeper. WTBT really wanted to murder this angel. Then placed the c. keeper in fish trap. In no time he went in trap & we got him. I rehomed him immediately.

You might wind up with a peaceful WTBT. But if you choose that as your big fish, I would have a trap on hand just for peace of mind.

Here are some pics, I mentioned of fish I had in a past tank & a few I have now on your list. Your Blotchy Anthias is definitely a showpiece fish. They get more beautiful with age. I post some more in a bit. 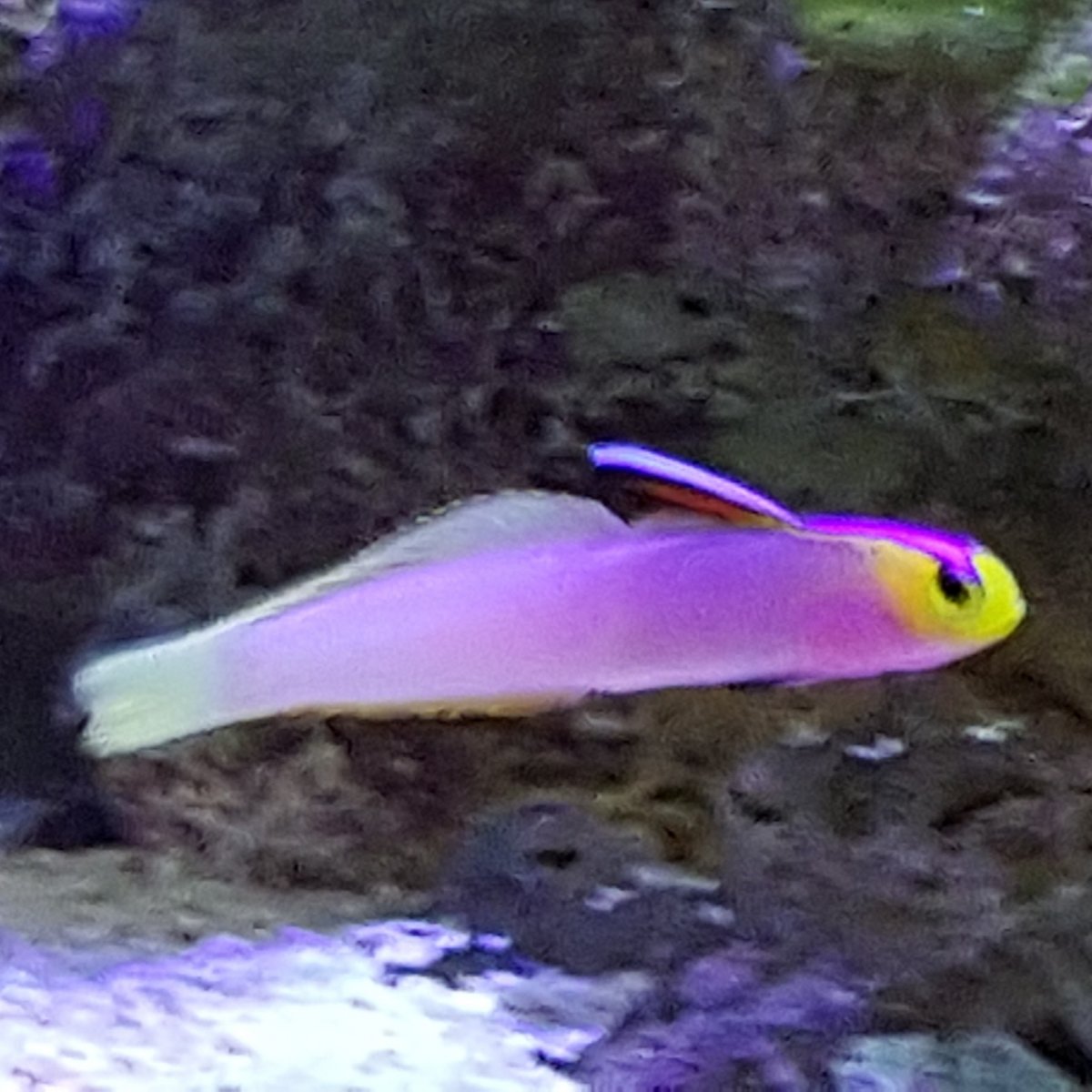 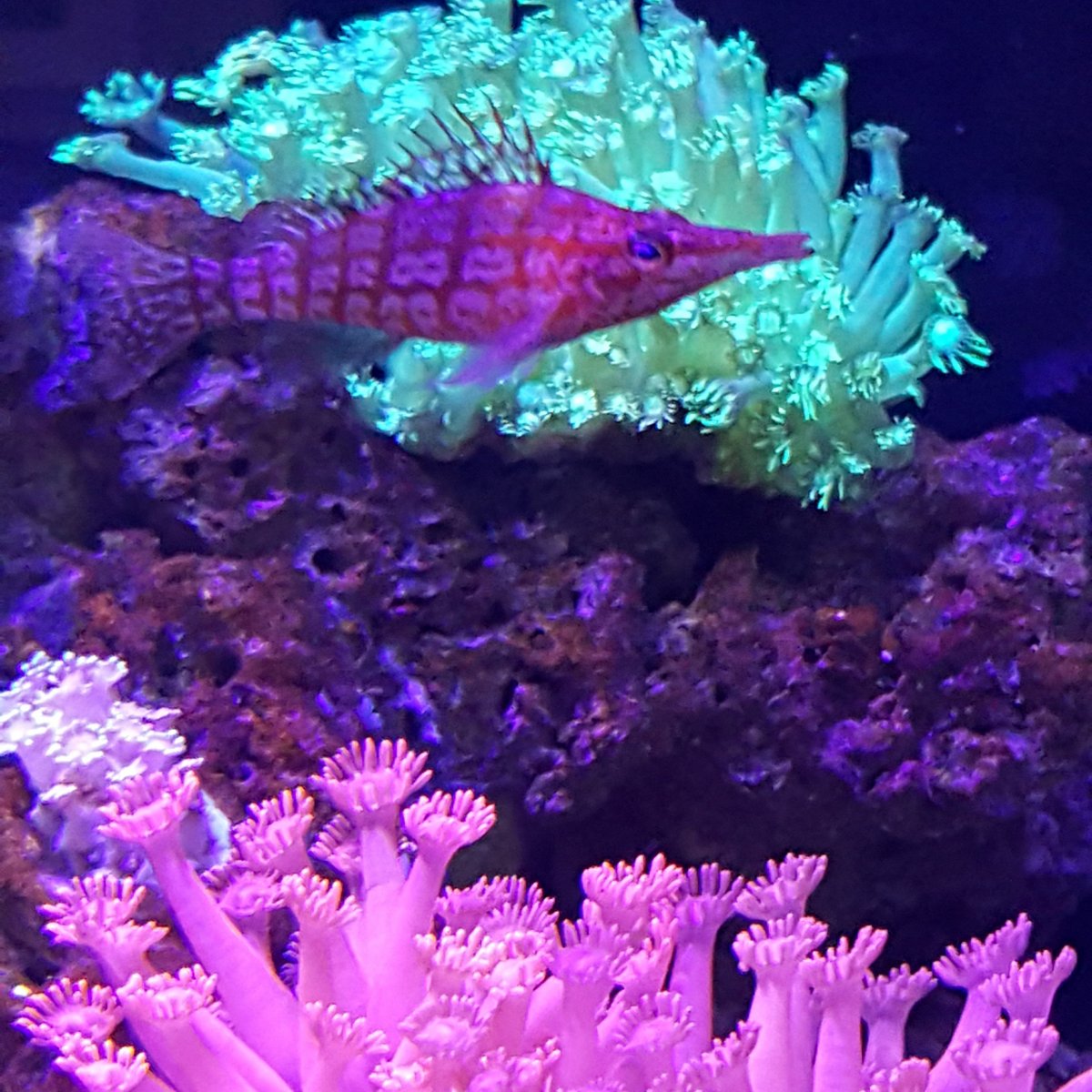 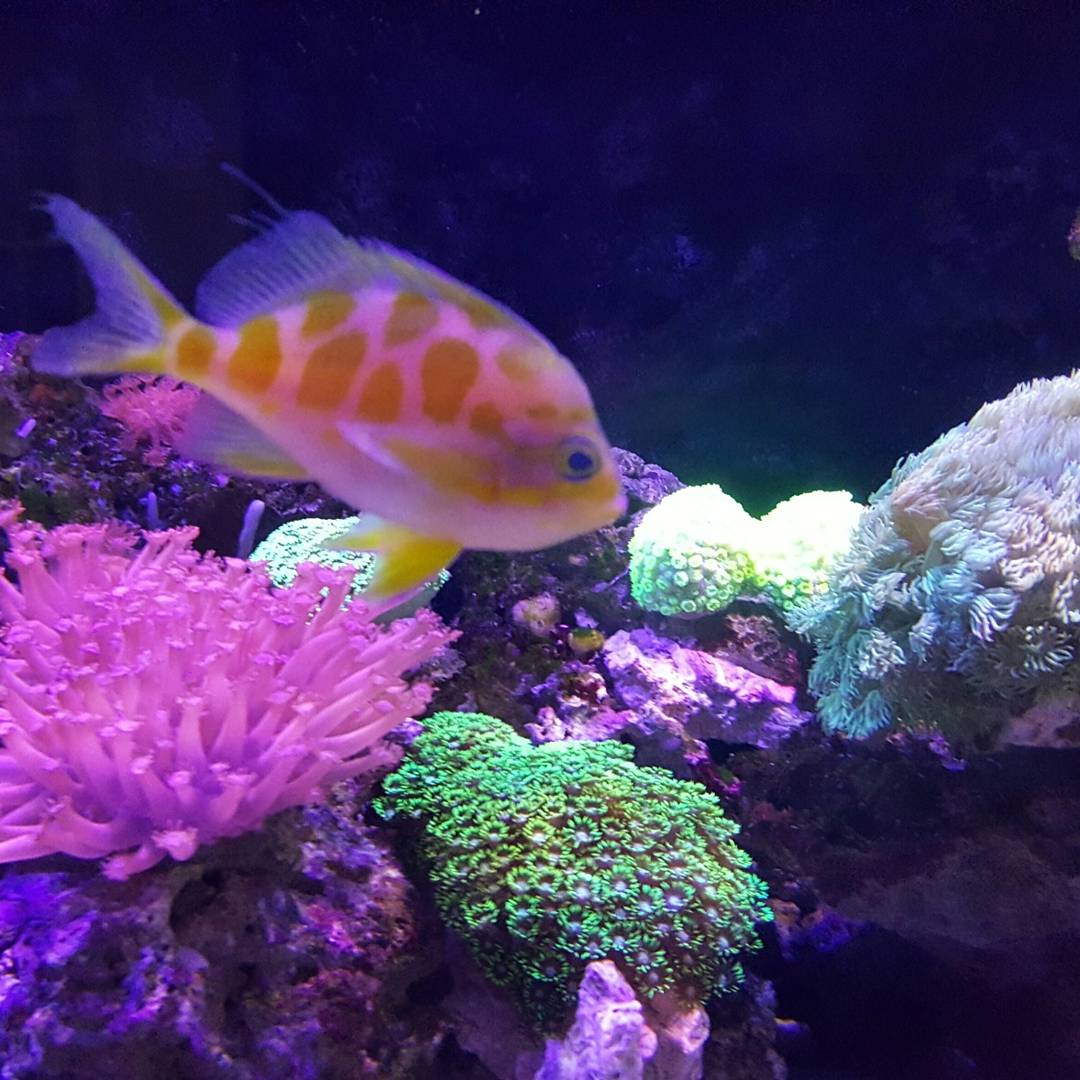 BTW I used the Pages app on my iPad to perfect my stocking list. I liked how I could see whole tank view. You can take a shot of your actual tank as background. Then:
It is not perfect but I think it is great for visualization. 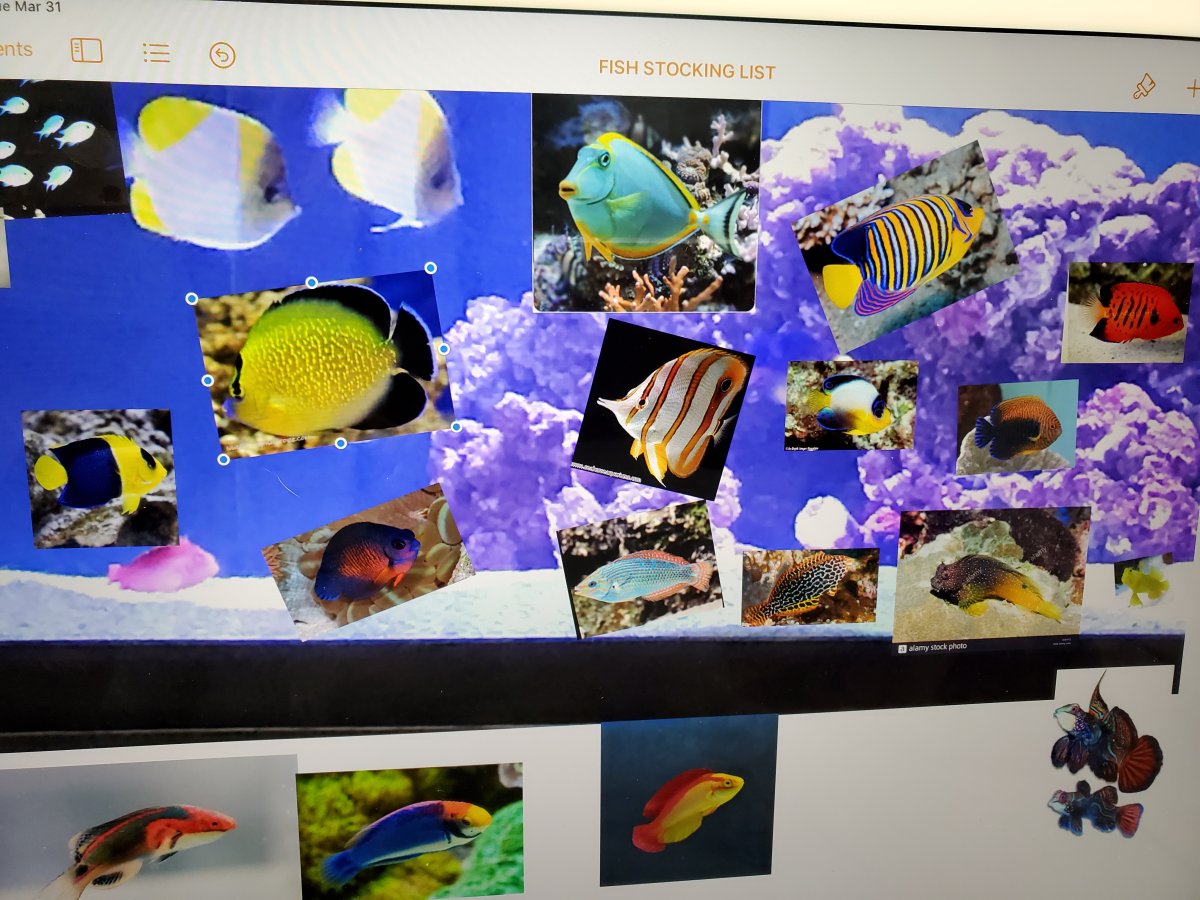 Thank you for sharing this information @DexterB!
Check out links below for more info:

DexterB said:
BTW I used the Pages app on my iPad to perfect my stocking list. I liked how I could see whole tank view. You can take a shot of your actual tank as background. Then:
Click to expand...

awesome! I've been using Pinterest but your approach is more flexible =)

How's the Hawkfish? Any issues w/ shrimp or a small blenny (tailspot)?
- Arin

I had the Longnose in a past tank. Never touched an invert very peaceful. Never paid attention to any fish.

I had an old Pixy Hawk. Never touched inverts. He would check out new arrivals but never bullied. I have heard some Pixy Hawks can bother new arrivals. Mine happened to be laid back.

My current Flame Hawk also never has touched an invert. He also does not bully, although today my Starry Blenny was eating a huge chunk of LRS. The Flame swam up & grabbed it out of the blenny's mouth, then drove into a cave to eat it. The Starry did not care at all. They get along well.

Now I have known someone that rehomed a Golden Japanese Hawkfish. They seem to be more inclined to possibly be territorial.

DexterB said:
BTW I used the Pages app on my iPad to perfect my stocking list. I liked how I could see whole tank view. You can take a shot of your actual tank as background. Then:
It is not perfect but I think it is great for visualization.View attachment 2193
Click to expand...

This is great stuff, @DexterB! So glad you shared this!

DexterB said:
BTW I used the Pages app on my iPad to perfect my stocking list. I liked how I could see whole tank view. You can take a shot of your actual tank as background. Then:
It is not perfect but I think it is great for visualization.
Click to expand...