Show Off Me And My Dad's Journey

So after @smsreef's encouragement, I decided to post me and my dad's journey to our current 240-gallon tank setup.

My dad started off with keeping freshwater tanks. I remember when I was still little that we kept guppies and an arowana. We moved out of our old house and dad kept the arowana (or bought a new one, I forgot) and started keeping flowerhorns. When I was in the middle of elementary school, I remember dad saying that he sold off the arowana and flowerhorns and converted the tanks to a saltwater tank. We kept damsels, tangs, clownfish, angelfish, etc. At that time the hobby was still in its early stages in the country so we had a local forum with not much members and so we really lacked research and bought fish on a whim. We even kept a small shark and a small blue-spotted ray in a 75 gallon tank.

When I reached high school, we moved out again and we upgraded to a 6ft long 100 gallon tank. This time, we were able to do much more research, and we kept largely tangs and a pair of clownfish. The hobby was still in its early stages and grew only a little. We get a few imported fish here and there (HYTs, PTs, PBTs, Flame Angels, Lemonpeel Angels, etc.), but in terms of livestock diversity, mostly still locally-found species. Equipment-wise, there are a handful of importers of skimmers, lighting equipment, food, etc. (I remember that time metal halides were the rage back then in terms of reef lighting). LEDs then started to gain a foothold in my college days and the hobby grew much more, but to me, was still considered small. We had a fairly decent system and quarantine was not a thing yet back then.

We then moved out again when I started working (which is where I live now), and given that the house had a good space, dad went all-in and had an 8'x2'x2' 240-gallon tank made. This time we wanted to do a FOWLR since we really liked how angelfish and butterflyfish looked than the boring, repetitive tangs . We also built a 20-gallon QT since we started to read about quarantine back then. Luckily, imports were much more regular and there were a handful of FOWLR owners, so imports weren't really restricted to reef-safe fish, but now, there were more angelfish species being imported (at a still limited quantity though). As a note, imports aren't really that regular, it really depends on the permit processing (aka government efficiency), and availability of fish from the supplier (specifically tangs like HYTs, PTs, PBTs since these were high in demand). Our original stock included an HYT, PT, PBT, Emperor Angelfish, Scribbled Angelfish, Annularis Angelfish. This suffered a wipeout because I didn't quarantine a butterflyfish properly (newbie mistake, I thought it was having a hard time in QT and simply plopped it into DT). We then slowly restocked the tank in this order (if I recall correctly):

There were still a lot of fish that failed QT that I forgot to list, but those in boldface are the ones that survived as of writing. A notable thing that happened is that I had to re-quarantine the fish from 1-8 as they were infected with velvet (either brought by inverts or there was something wrong when i QT'd). At this point, I've already (thankfully) upgraded my QT tank from 20 gallons to 50 gallons (45-gallon water volume).

Protein Skimmer: Reef Octopus Classic 200 (This is the old version, still works like a charm)

RFG Nozzles for return​
Lights: 4x Aquaknight Syncra LED Lights (some cheap LED lights; 1 of them is broken where only the blue channel works)

For feeding:
In terms of maintenance:
For the QT, it's a 50-gallon (45-gallon water volume) tank with an eggcrate separator in case there would be a need to QT 2 fish. This has an overhead filter, 2 corner filters (that both serve as filtration and additional aeration as this is attached to an air pump), and 2 small wavemakers.

Future plans:
Here's a shot of the tank (sorry for the bad lighting blurry photo, we still haven't wiped the front glass clean for a week ) 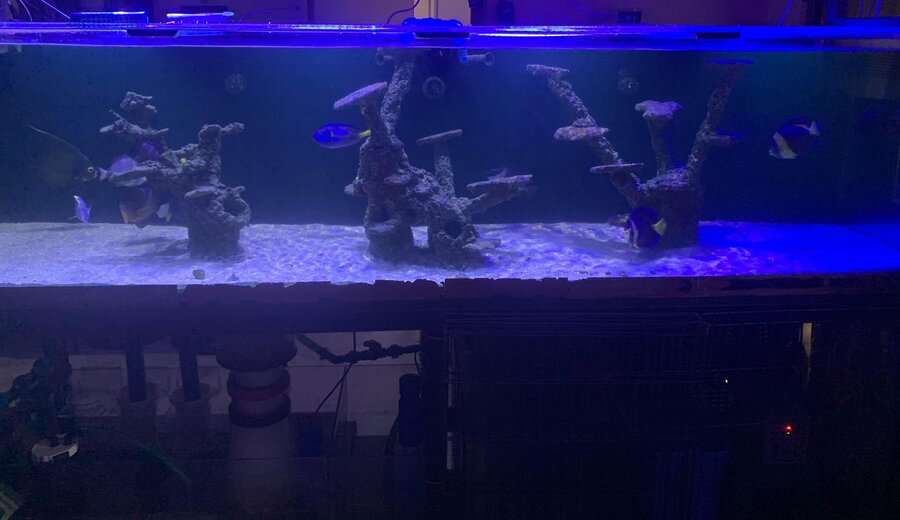 If you have any questions, please don't hesitate to ask.

Wow, thanks for sharing this!
How To - Quarantine