Hello All! Some of you know me, some of you don't, but here's a quick run down of my current tank.

I started this peninsula about 3.5 years ago, I've had tanks from 5 gallons all the way to 200 plus gallons, and this has been my favorite one so far. I knew I wanted a Mr. Aqua 22 gallon, and one just happened to pop up locally. The original owner of the tank itself had installed an internal overflow system, and it took up about a quarter of the tank. I knew I wanted as much real estate as I could possibly get, so I drilled it, and installed an Eshopps overflow. I also had a local club member to me help design a perfect stand designed specifically for this tank.

When I had a vision for this tank, I wanted something that could easily be broken down, moved without assistance, and set up again with ease. From the rockwork, the coral placement, to the plumbing and equipment. I'm glad I did, because I have had to break it down about a year and a half ago, and move it into our new house. If the background in my progression pictures looks different, it's because it is! 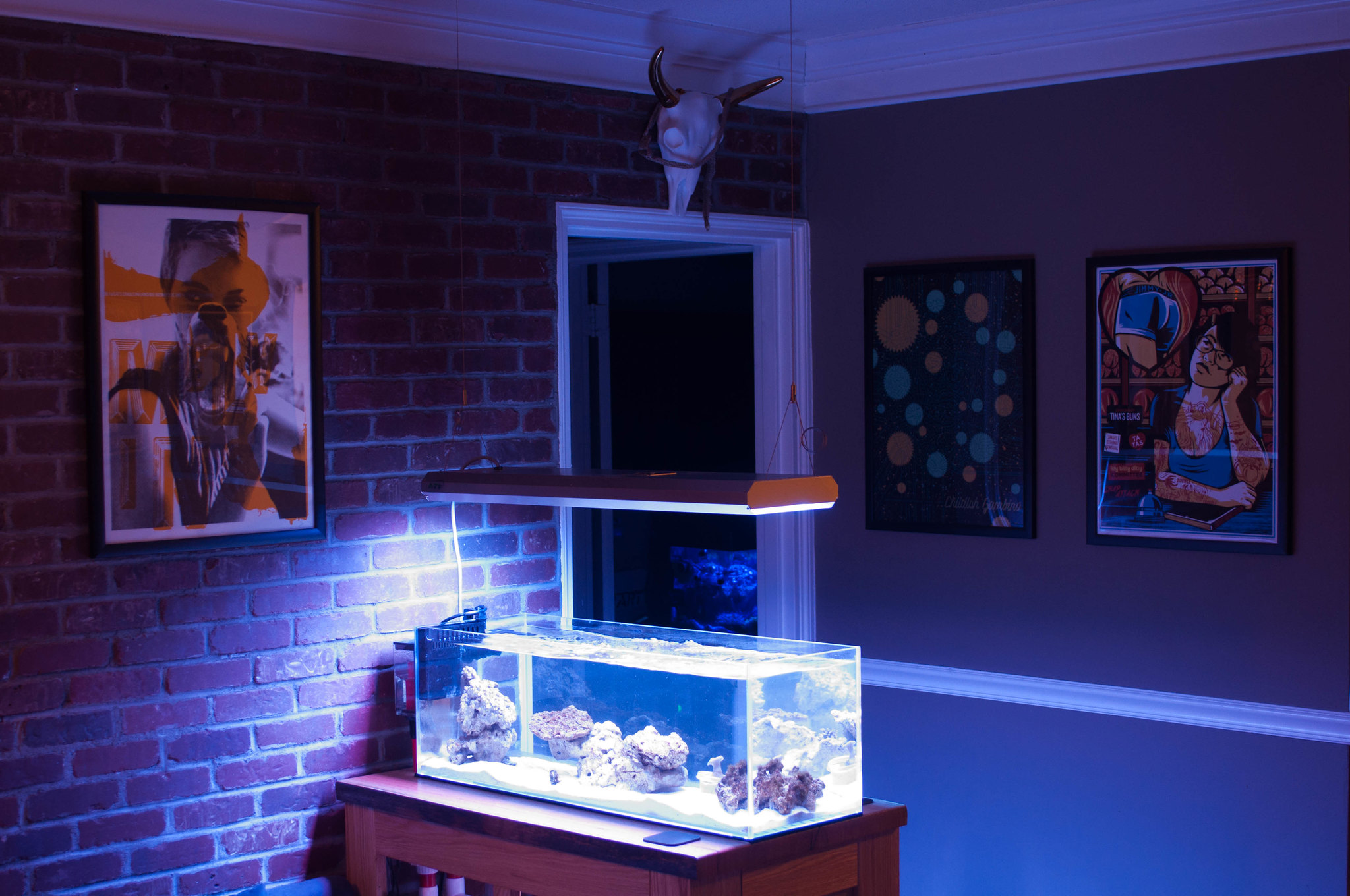 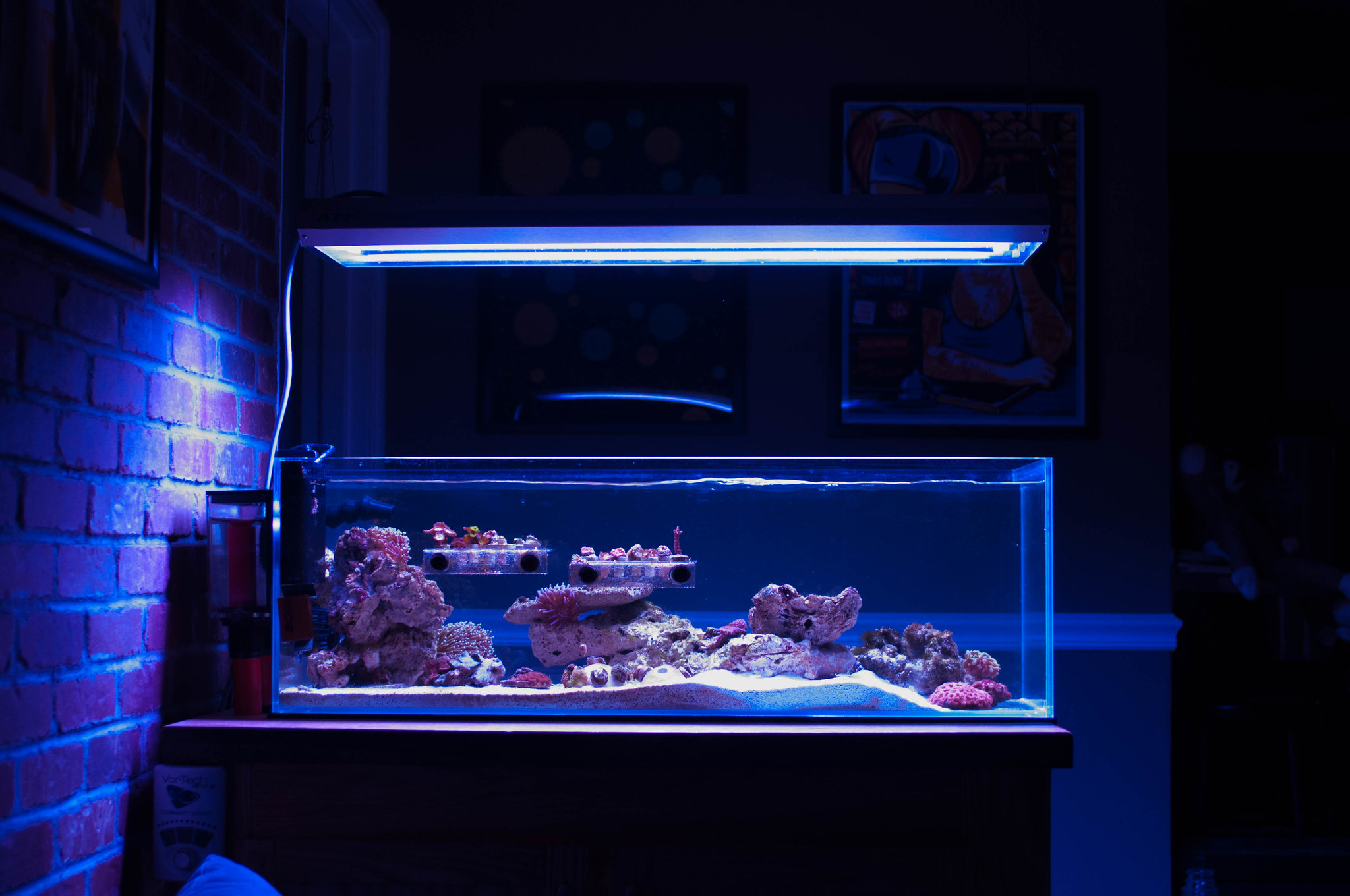 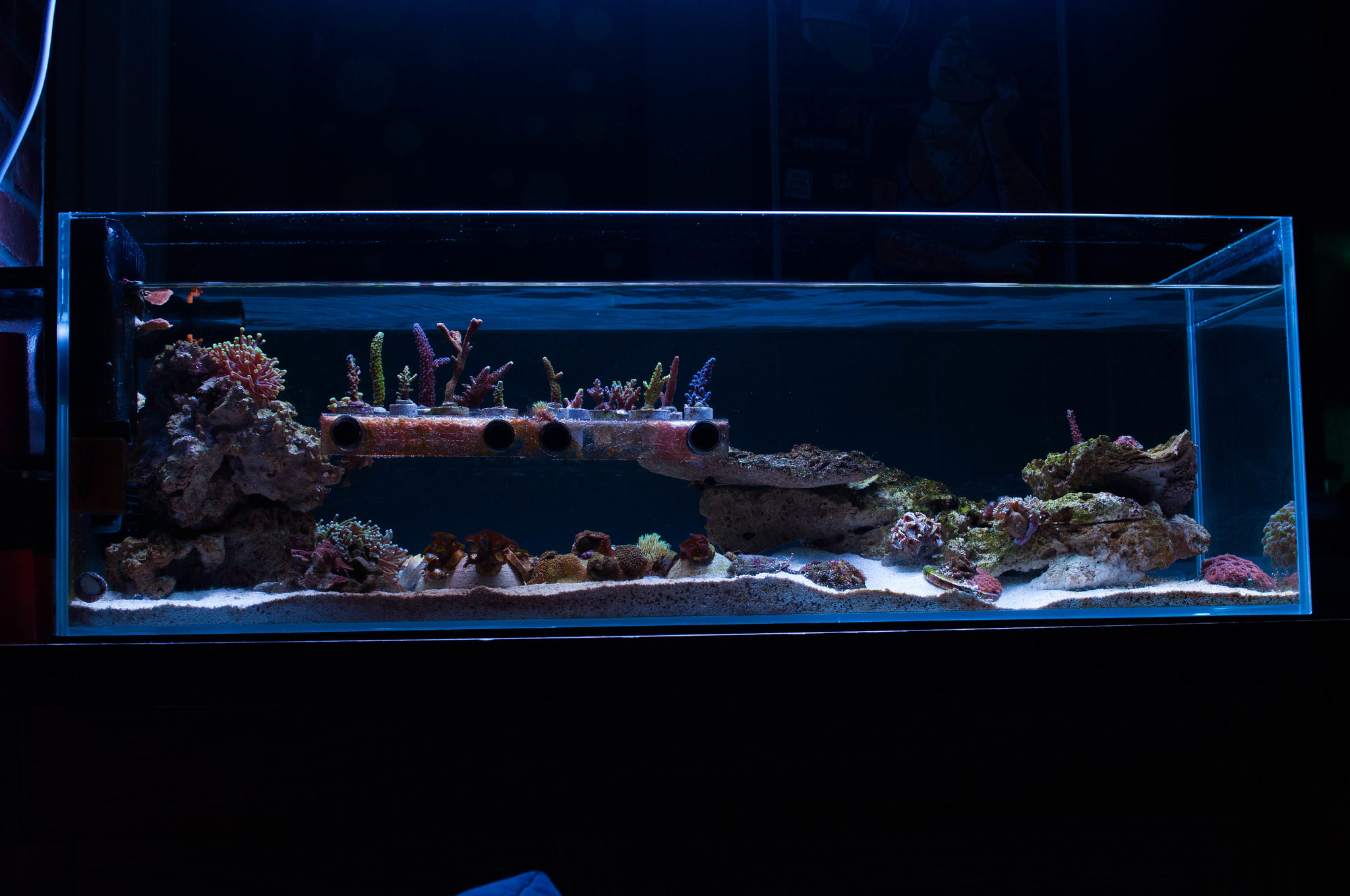 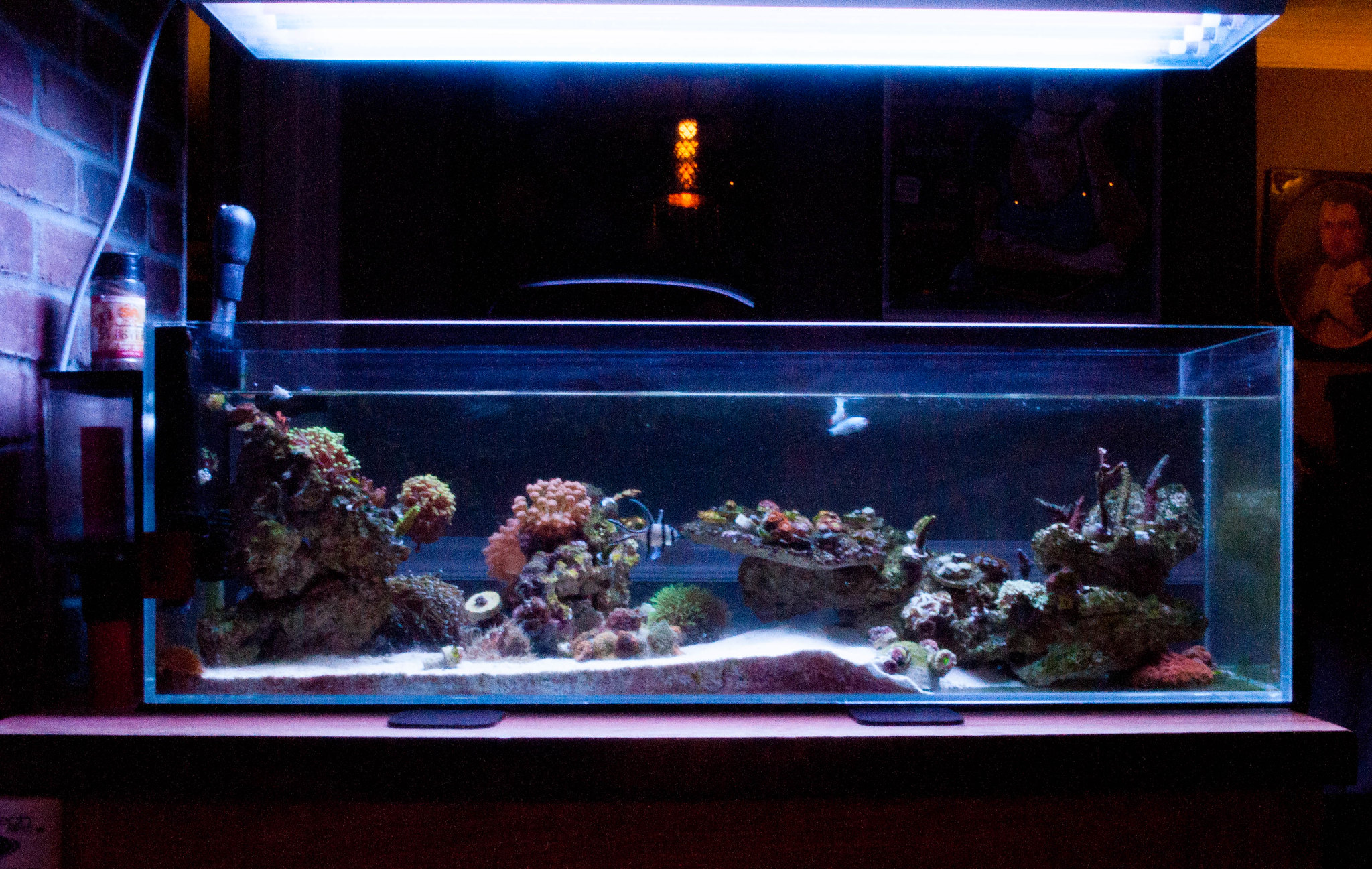 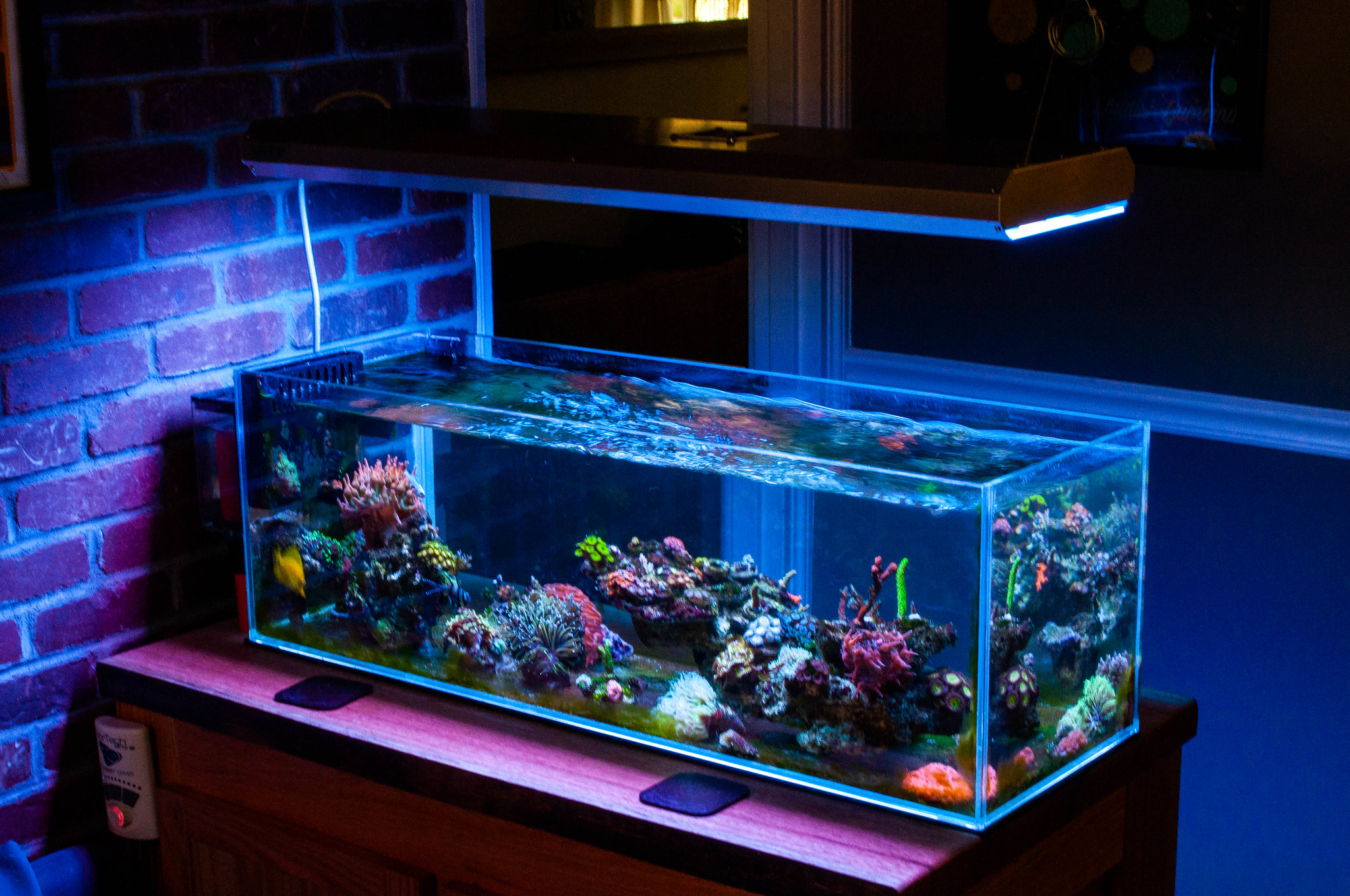 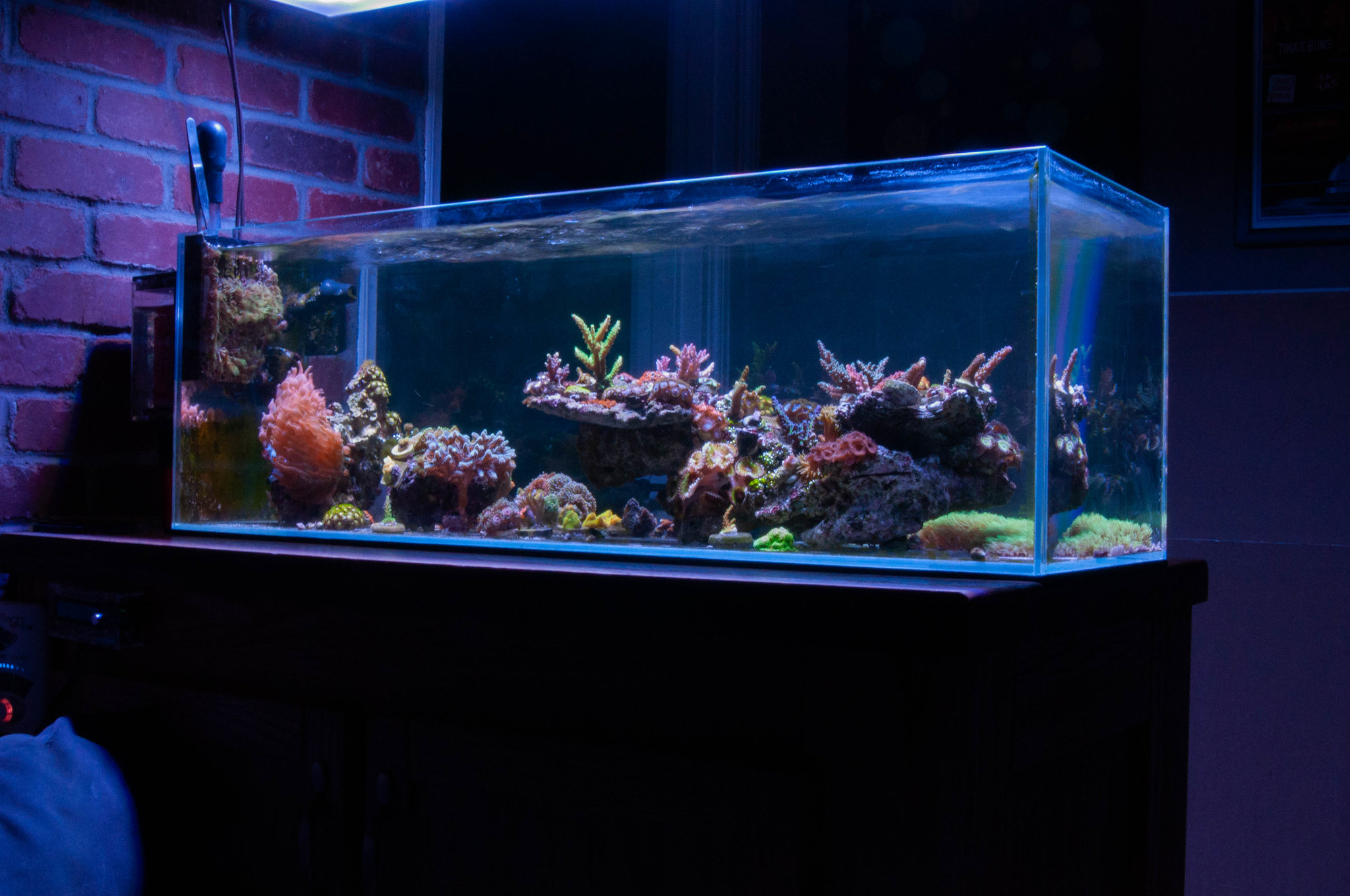 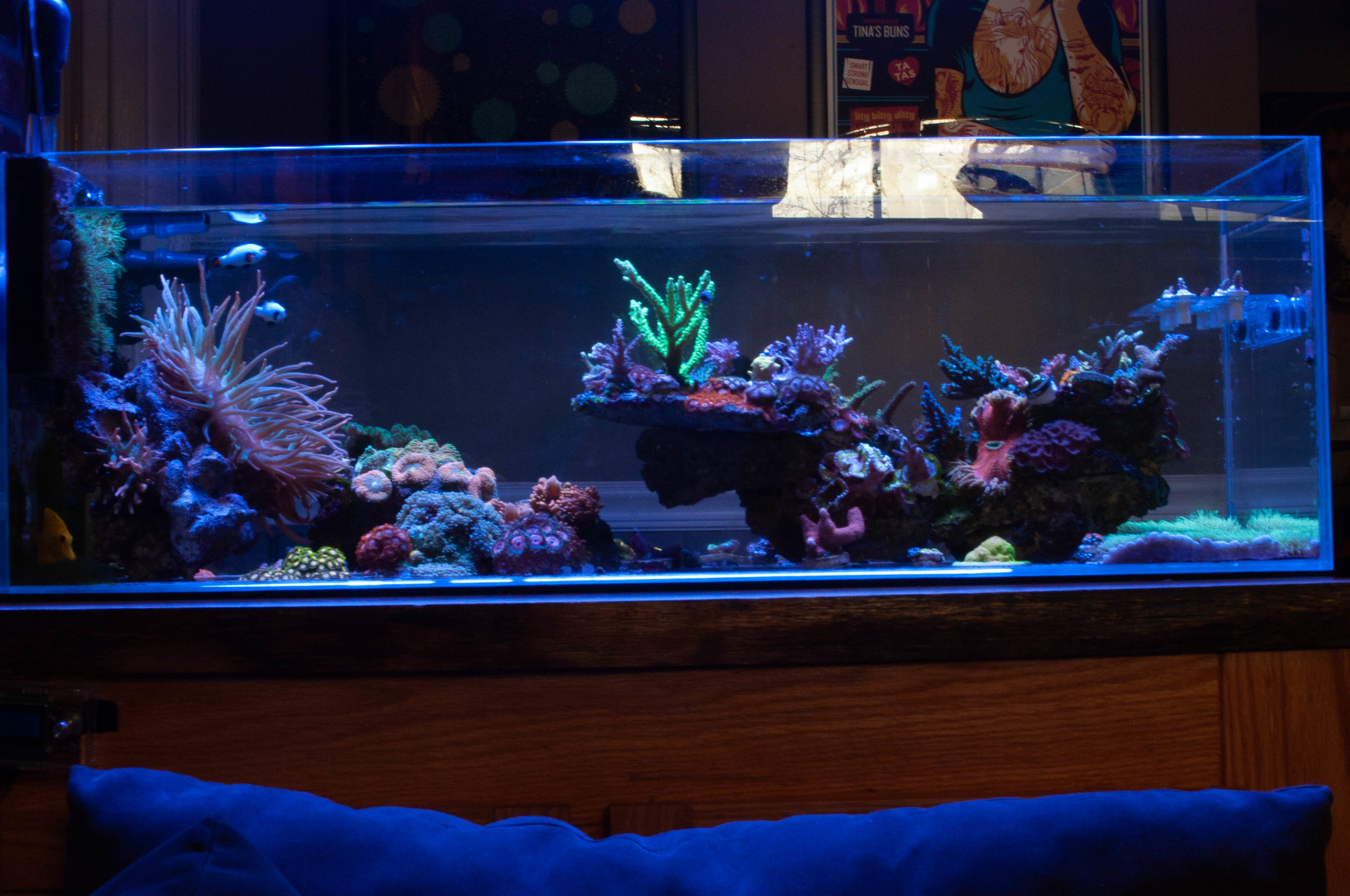 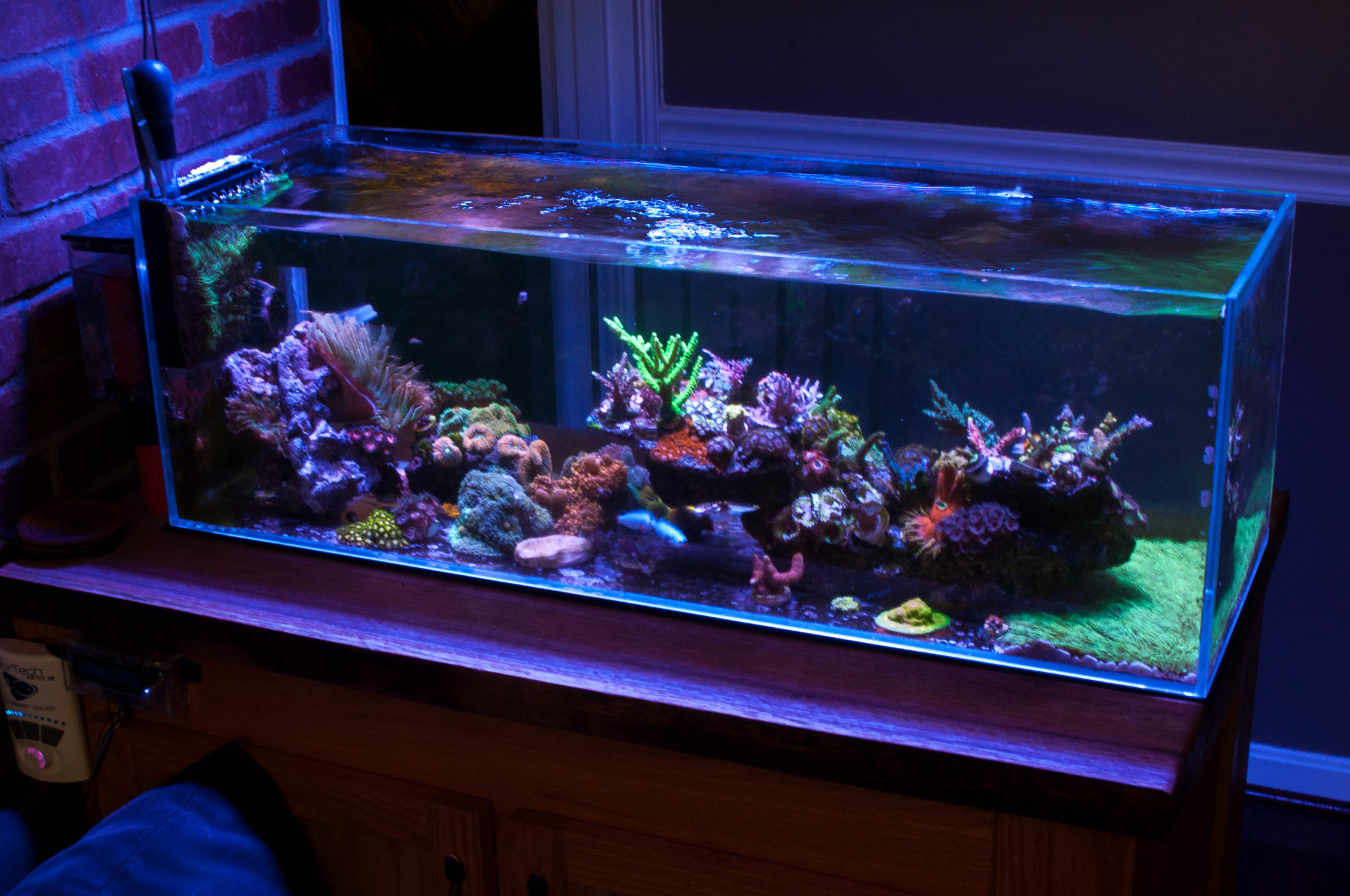 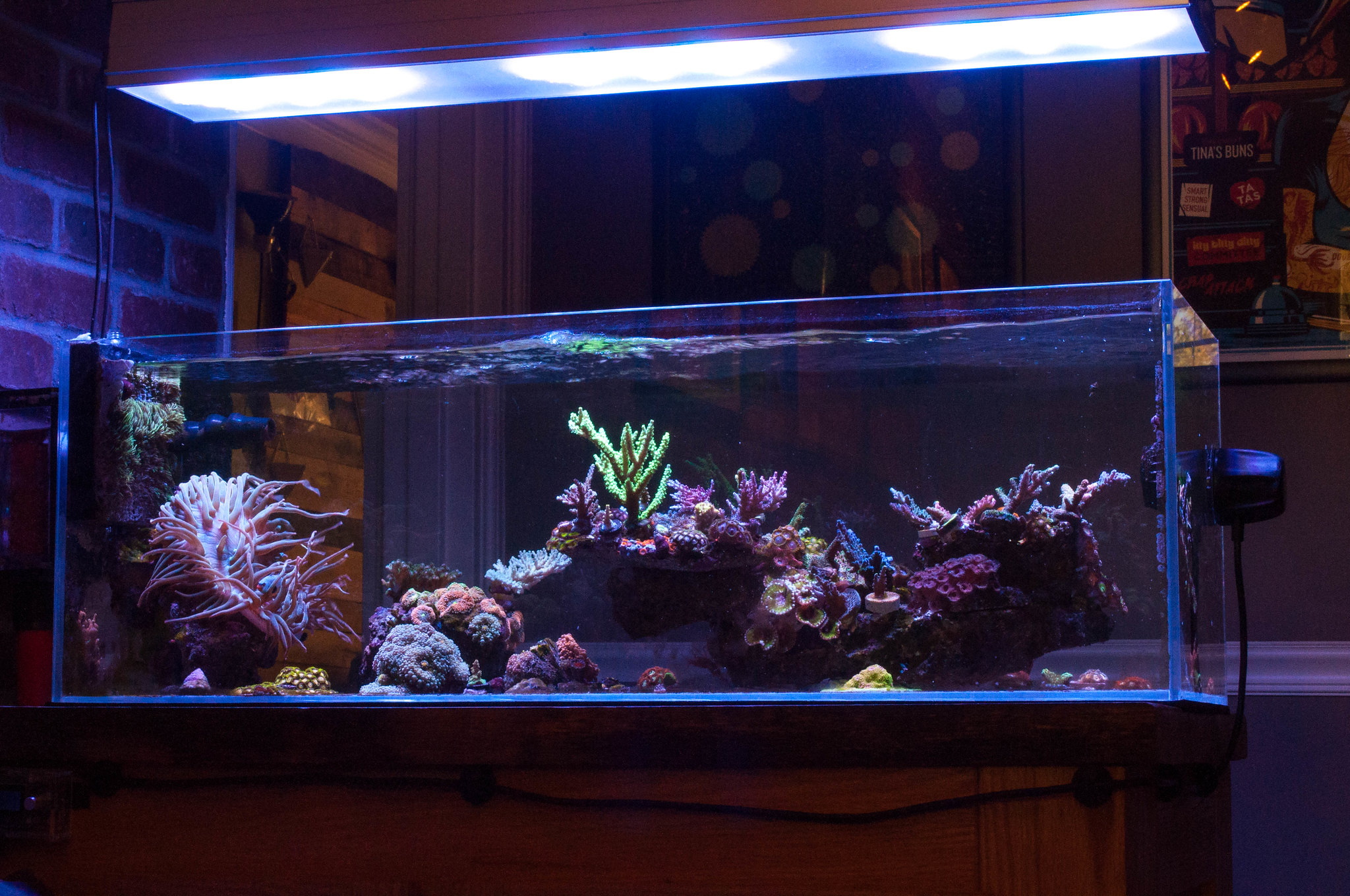 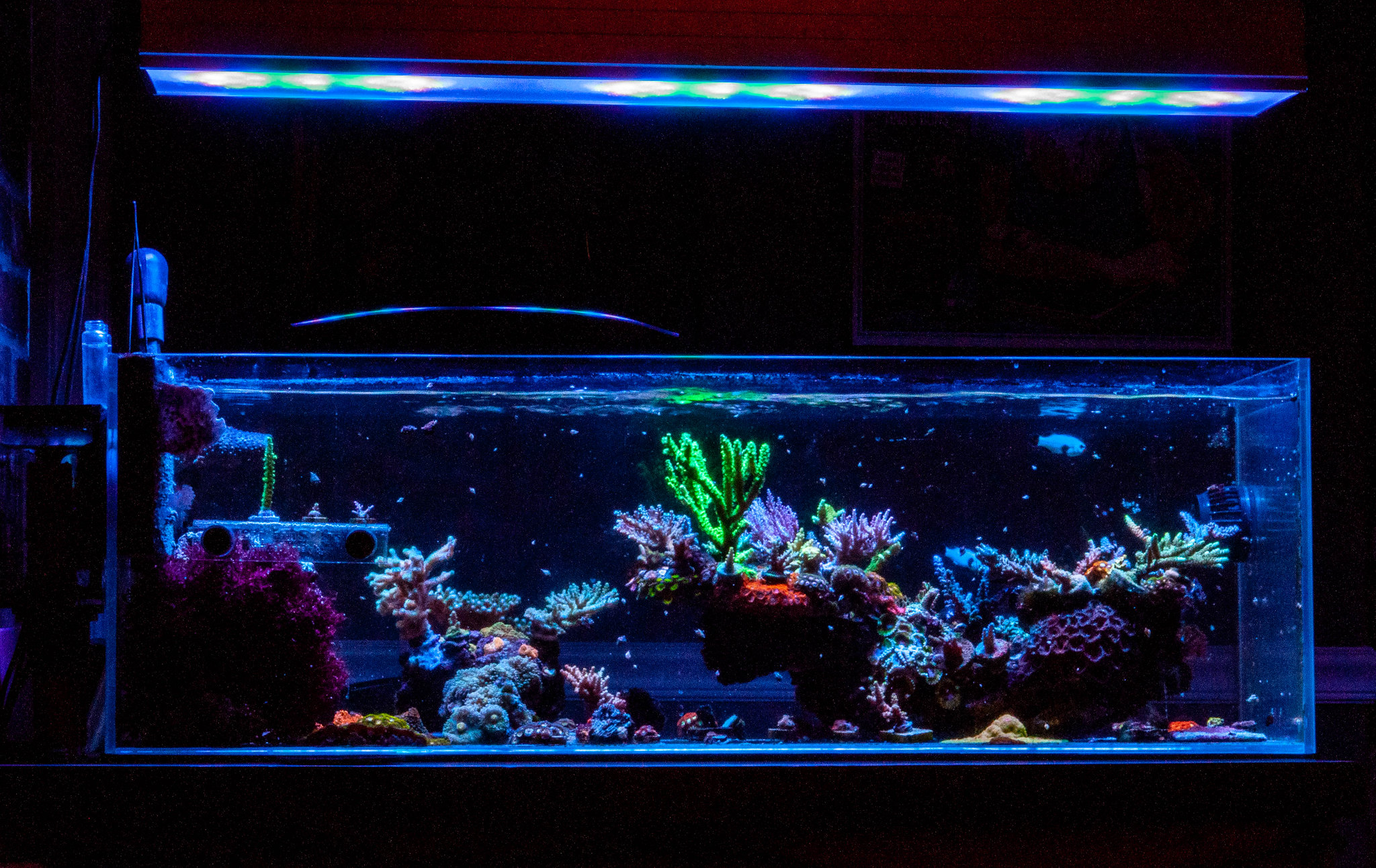 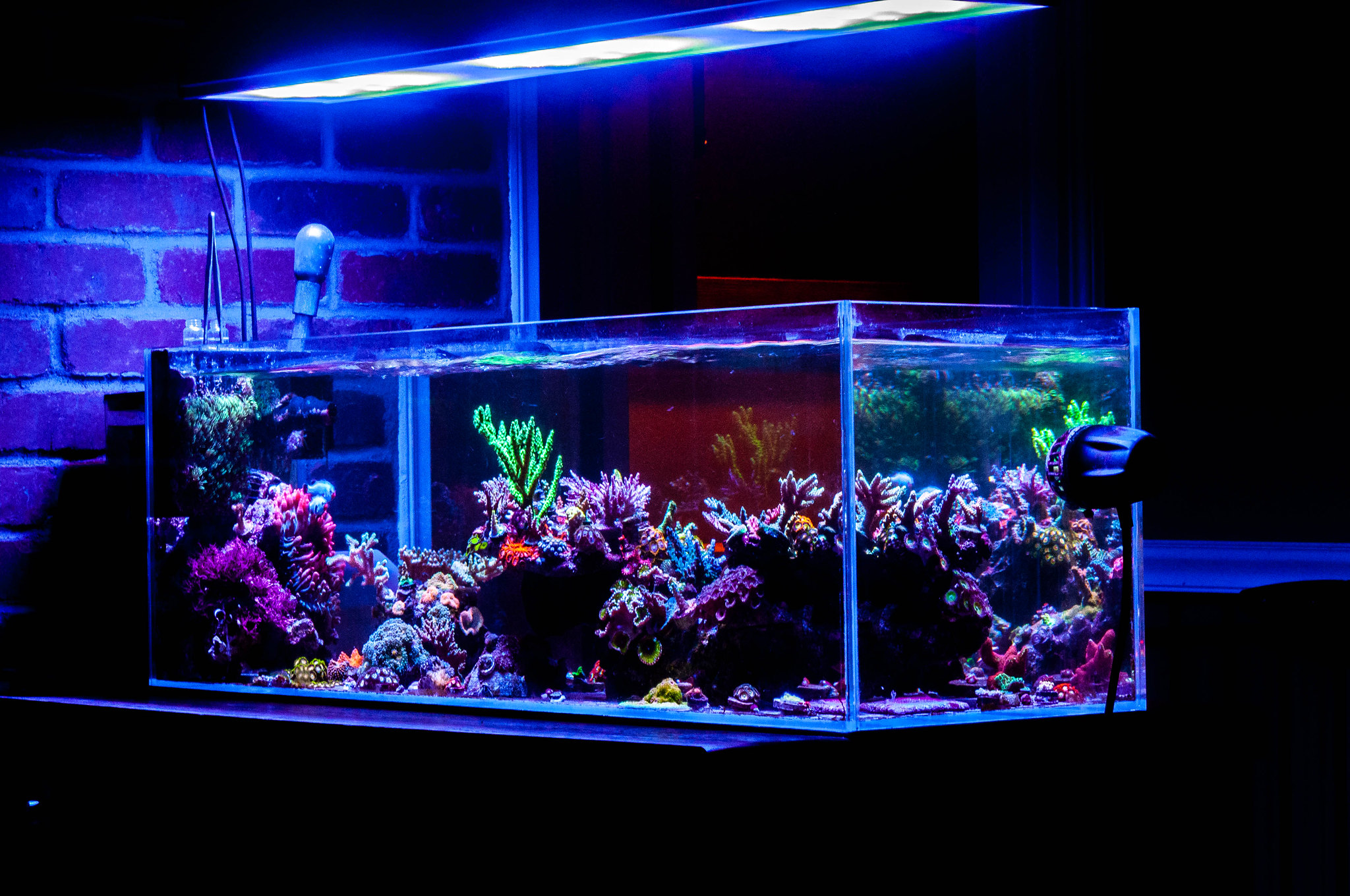 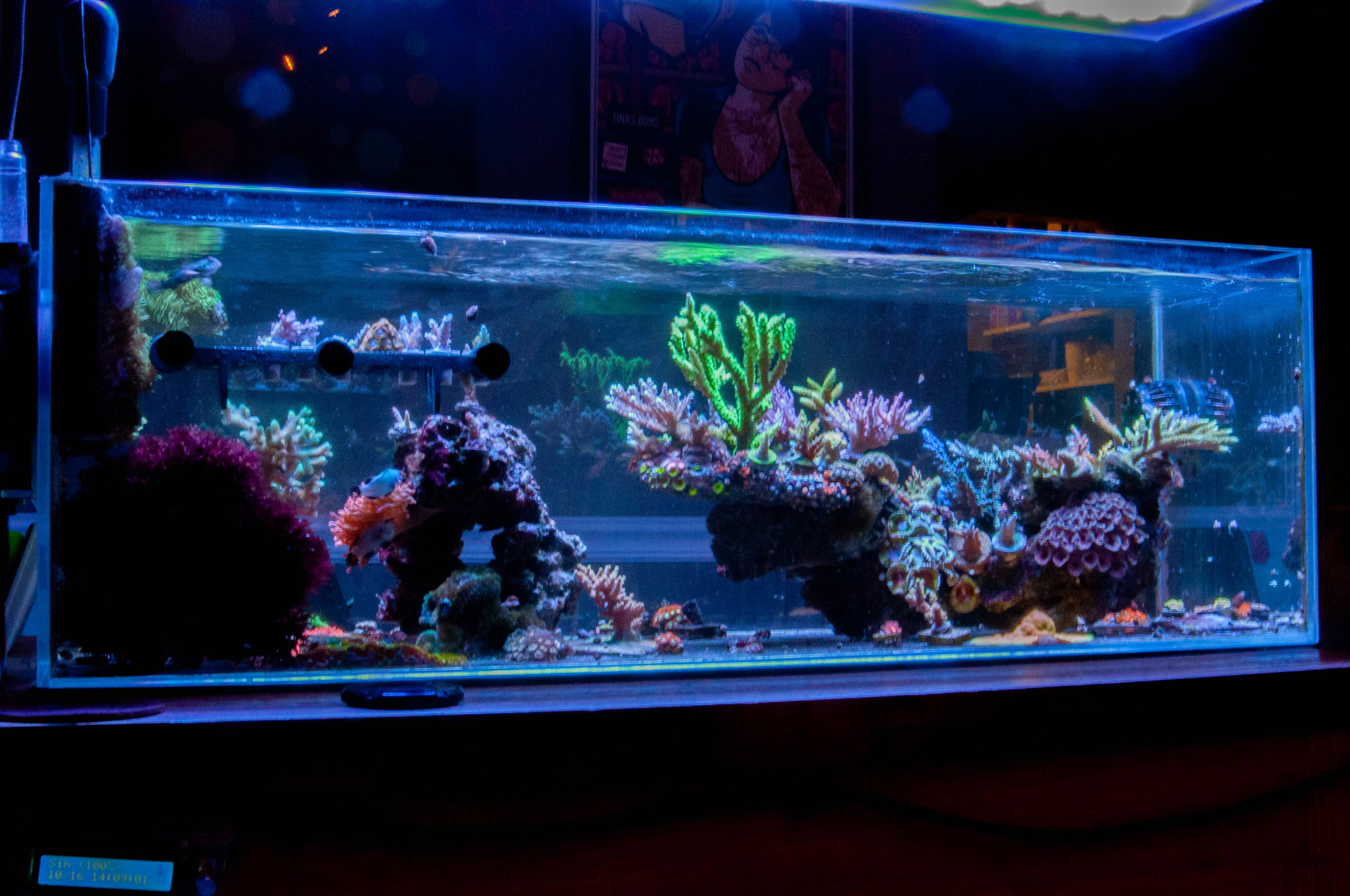 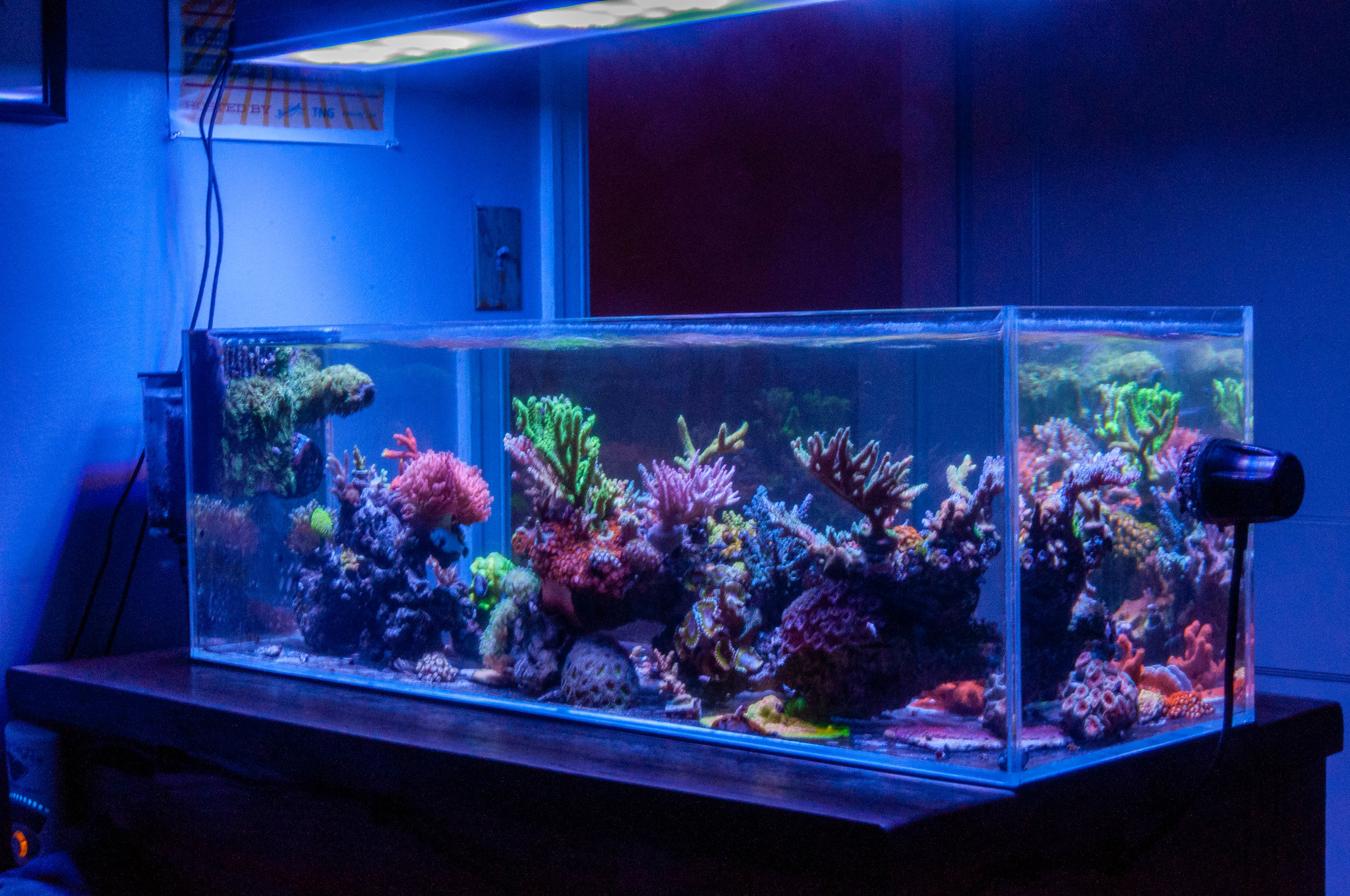 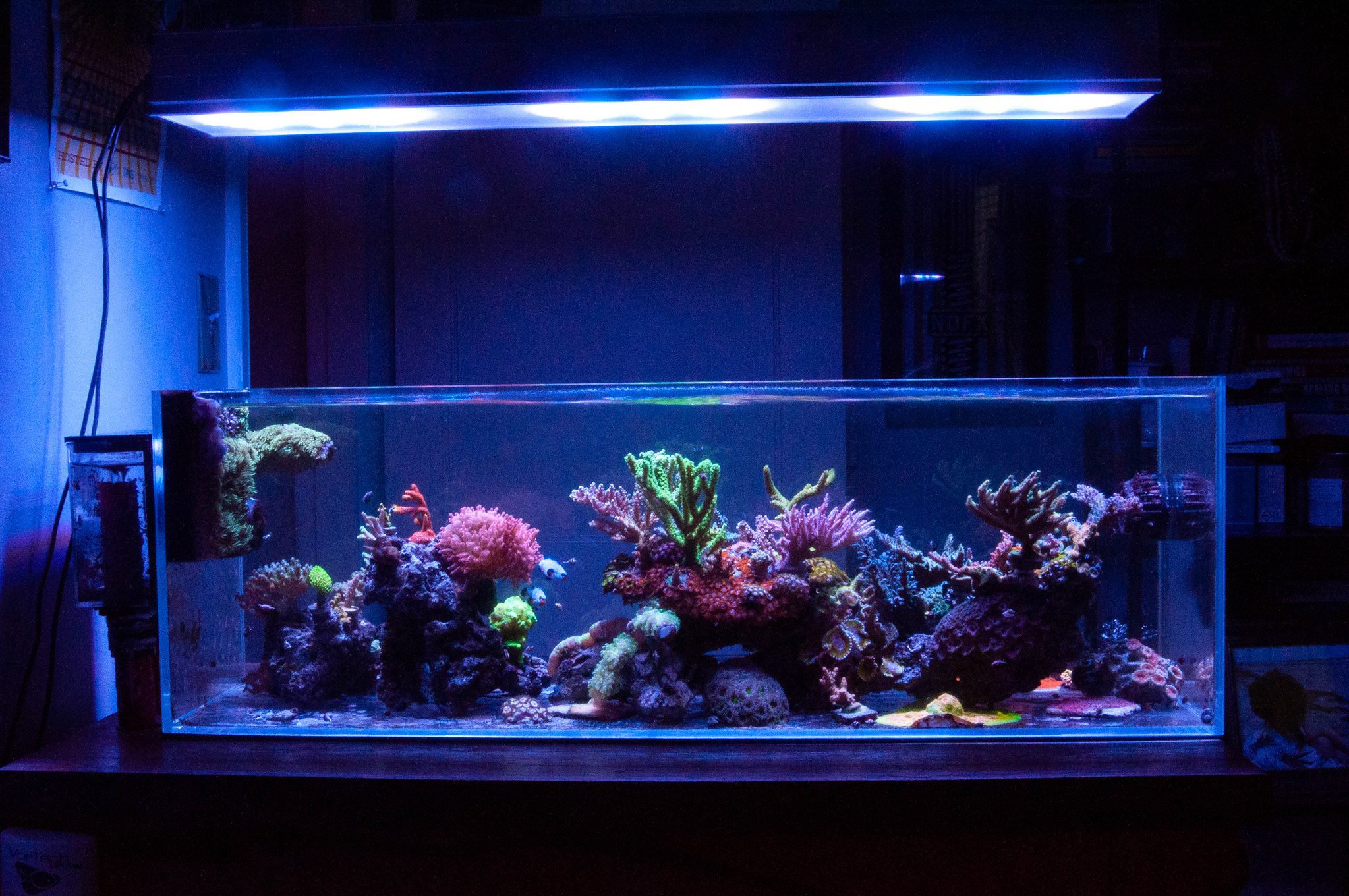 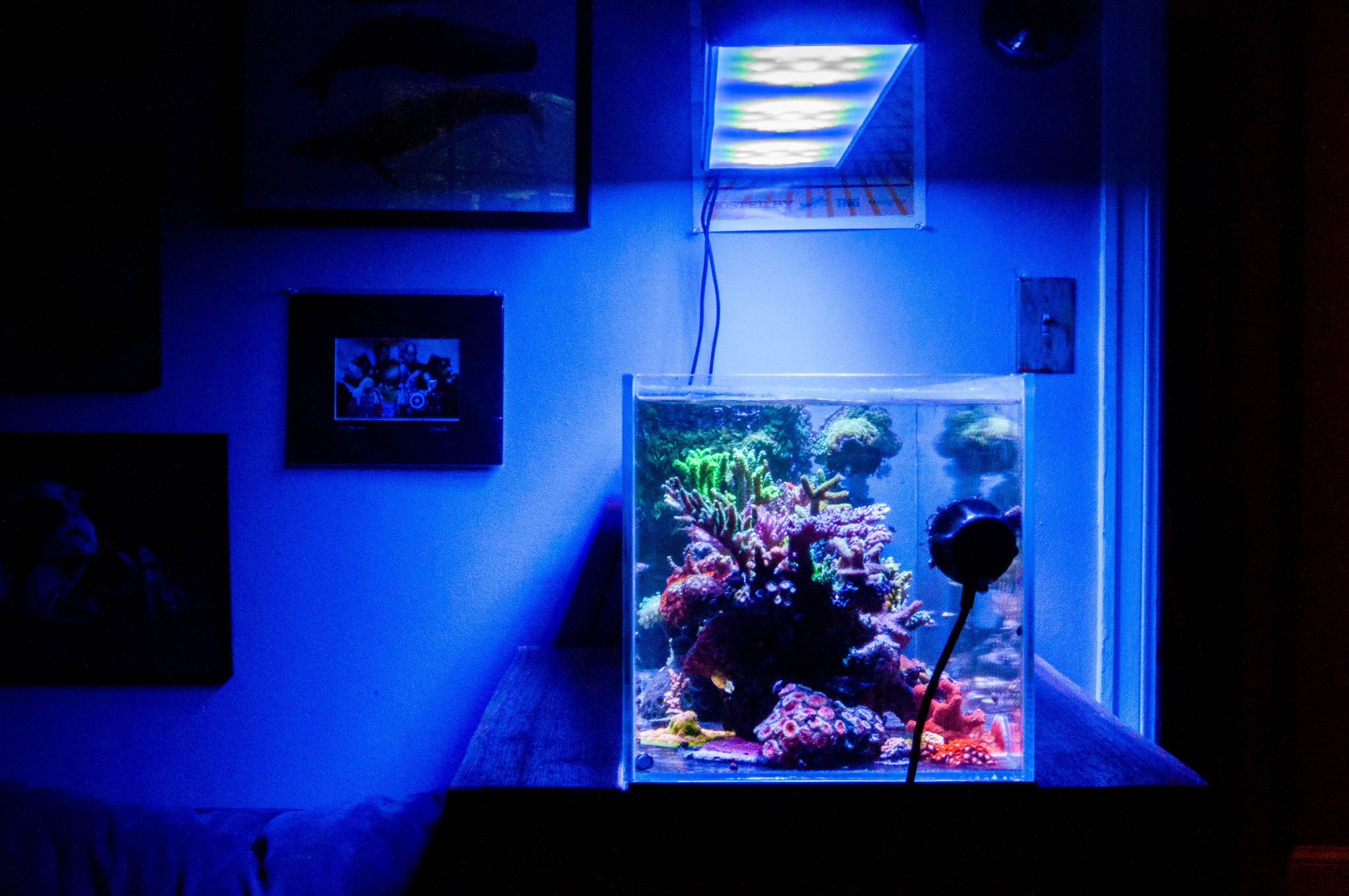 Wow, beautiful tank. What sorta sump are you using for it?

Now I'm sure you're thinking that all looks great, YHSublime, but it's not all sunshine and rainbows. This past summer of 2020, I had a tank crash while I was on the first vacation I'd taken in years. Well, that's how it all started I suppose. While I was vacationing at the beach, my tank sitter topped off with tap water for about a week and a half (into my ATO reservoir.)

The loss was crushing, thousands of dollars of SPS, mostly acropora, all that I had grown from small frags into mini colonies, completely gone. 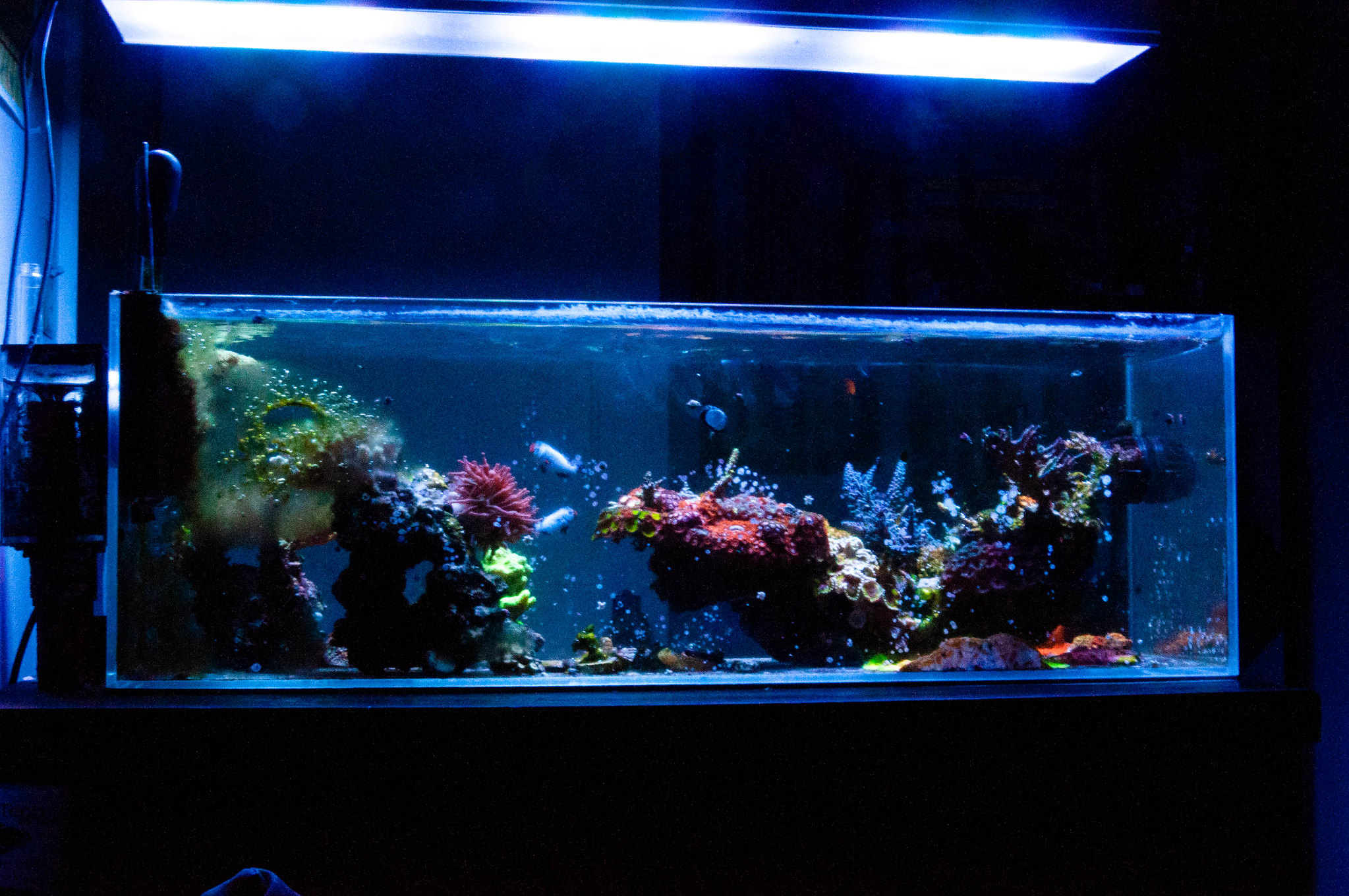 For a while I considered getting out of the hobby that I've loved for a decade, but continued on with basic maintenance. I actually had a buyer lined up for absolutely everything, full package deal, but they backed out, lucky for me. This is it's purgatory phase: 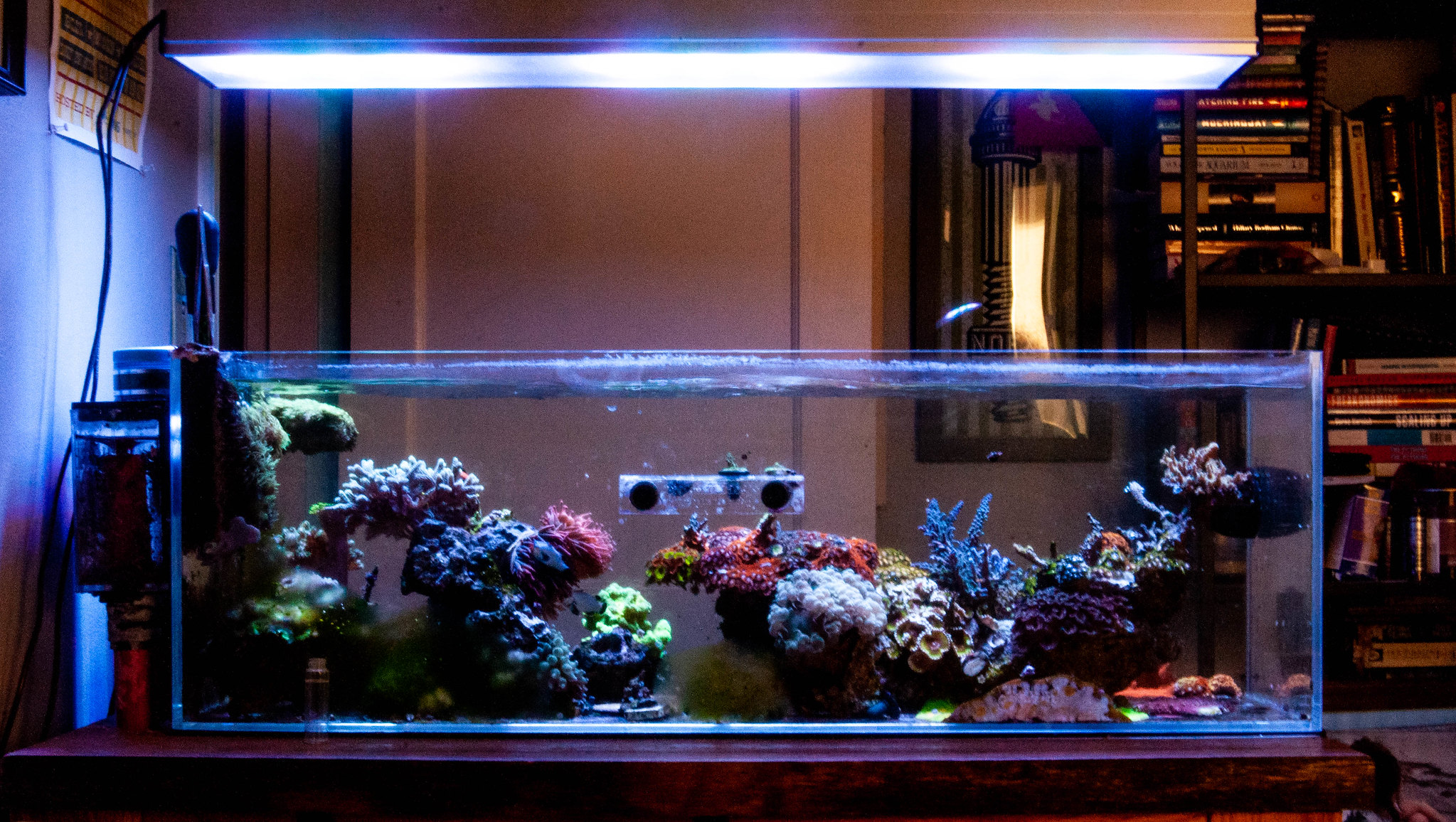 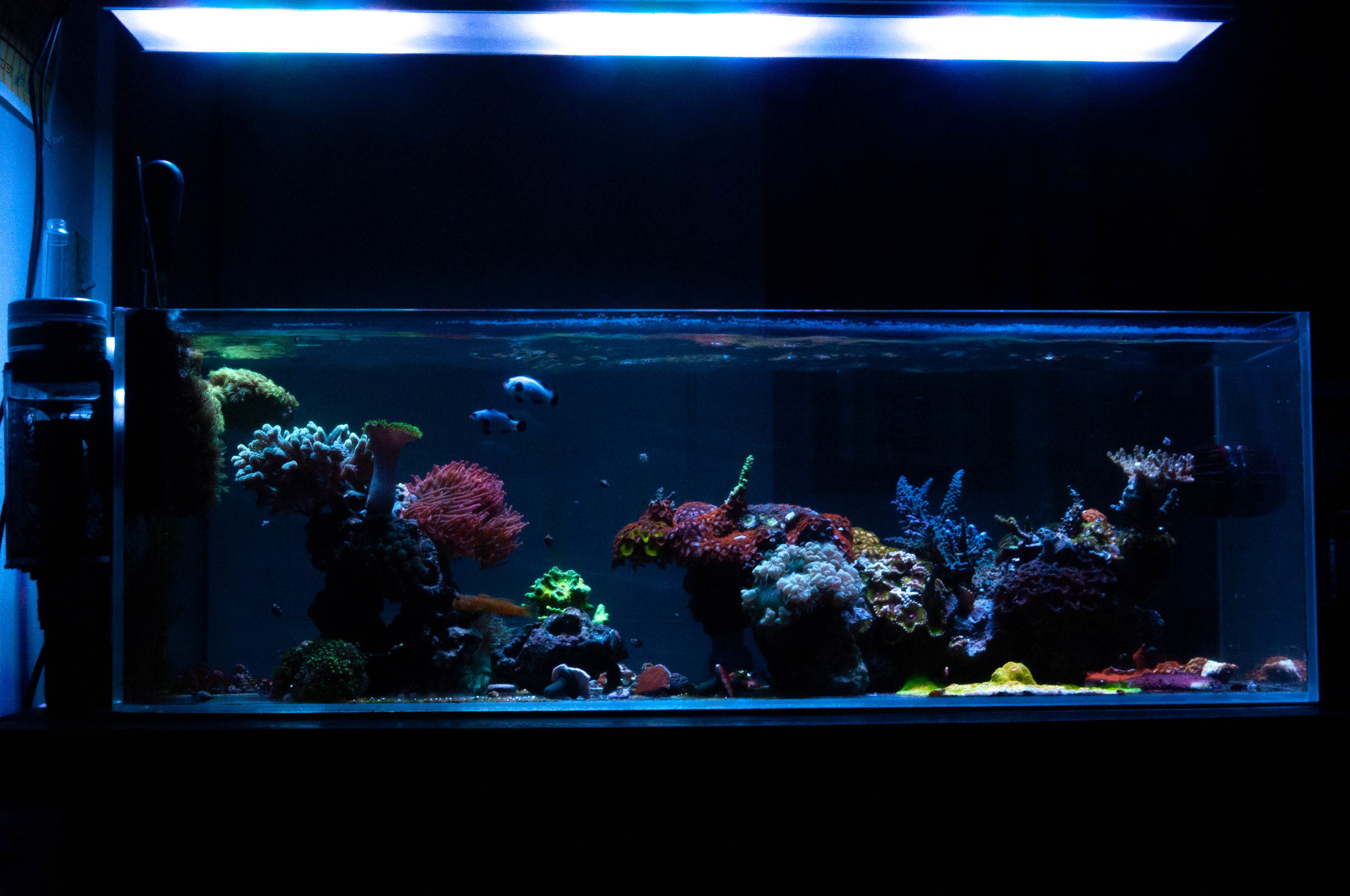 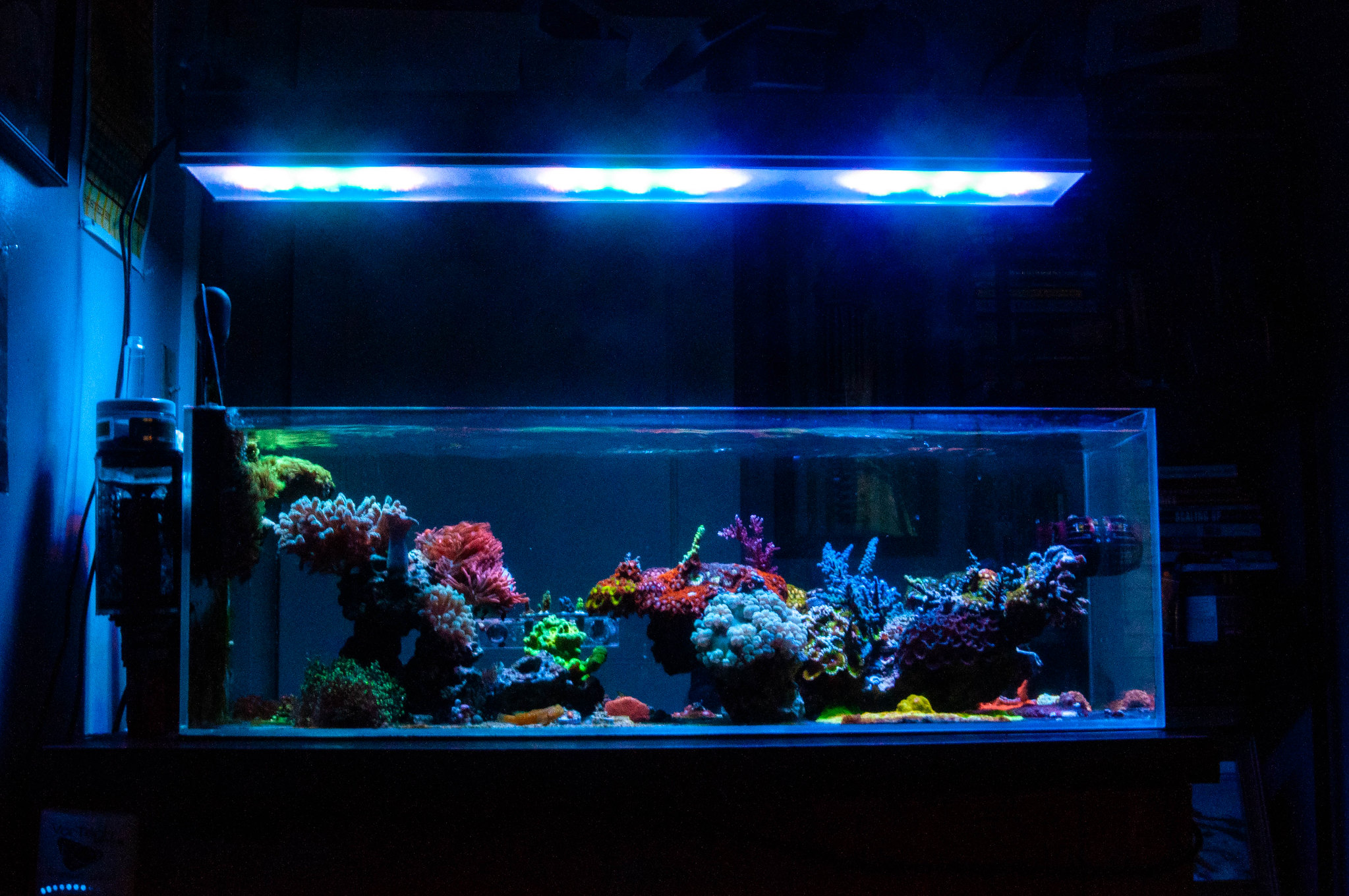 And here is the most recent FTS: 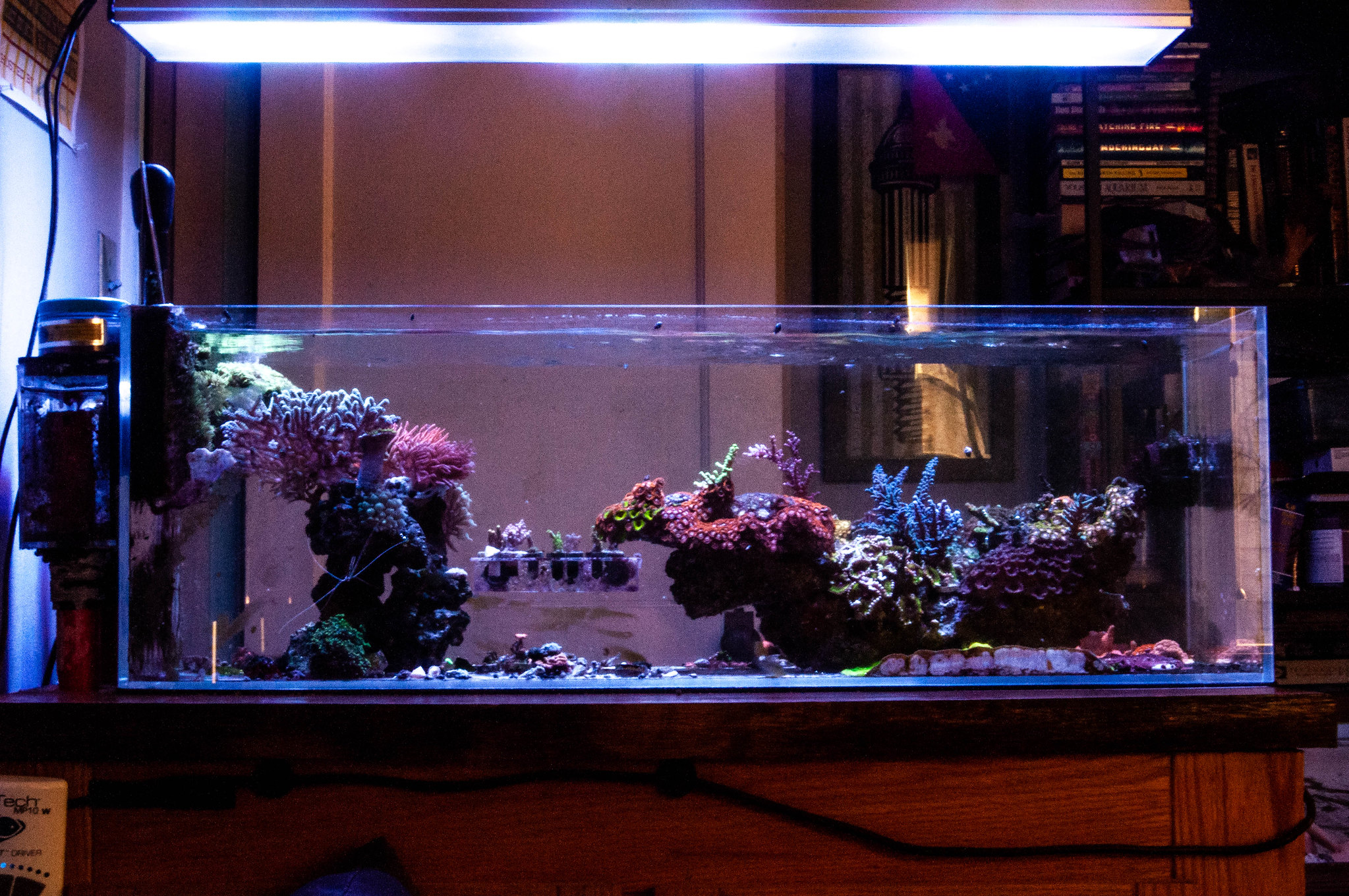 It's actually even changed since this, and I have continued to toy with the idea of breaking it down, but now I am invested again and rejuvenated. The SPS that I thought was once dead has actually started to sprout back from beyond the grave. I have acquired a couple of high end acropora back again that are quickly growing, coloring up, and encrusting. I hope you'll join me on my journey as I continue to evolve this tank!

Max_nano said:
Wow, beautiful tank. What sorta sump are you using for it?
Click to expand...

Thanks! The sump is a trigger systems ruby 36. I had the stand designed to hold this sump exactly. There is precisely enough room for my dosing containers, and my small 4 gallon ATO reservoir along side it. Space is so limited, my doser is actually mounted on a shelf above the sump.

So glad to see you and your beautiful tank here

samnaz said:
So glad to see you and your beautiful tank here

Thank YOU for the heads up! Happy to be here!

Beautiful tank!
Check out links below for more info:

This setup is one of the most artistic setups i seen. Amazing job!
Display tank 175G full zeovit method
Display Tank journal:
https://humble.fish/community/index.php?threads/oz_spss-zeovit-system.3051/

OZ_SPS said:
This setup is one of the most artistic setups i seen. Amazing job!
Click to expand...

Thank you! It’s constantly changing and evolving with me, and as things move in or out. I’ll work on getting subs better photos soon!

One of my faavvooouuurrriiittteee tanks!! The human that runs it is okay I suppose too
Just you're everyday Aussie looking to collect as many butterflyfish as humanly possible!
Wrangy's Waterbox Wreef

Wrangy said:
One of my faavvooouuurrriiittteee tanks!! The human that runs it is okay I suppose too
Click to expand...

Hey bud! Tank is way cooler than me!

phatduckk said:
wow. that's one hell of a tank!
Click to expand... 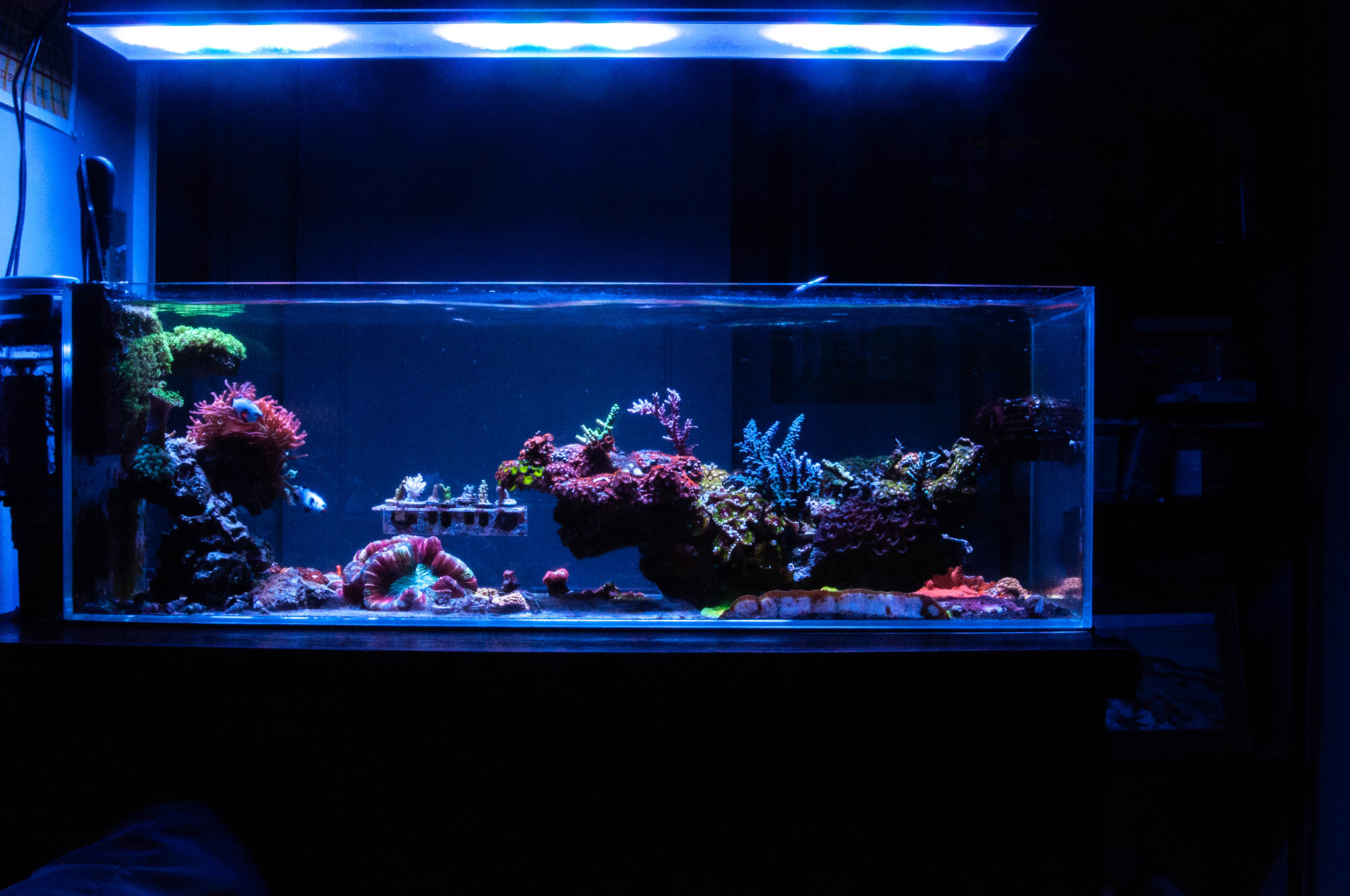 I removed the colony of birdsnest on the left, and sold a few anemones as well. I still have 4 on the rock, but not 9 like there were before! I also moved all the frags that were sitting on the floor bed and, well, kept them on the floorbed, but moved them over to the sides to make room for the tanks new crown jewel: 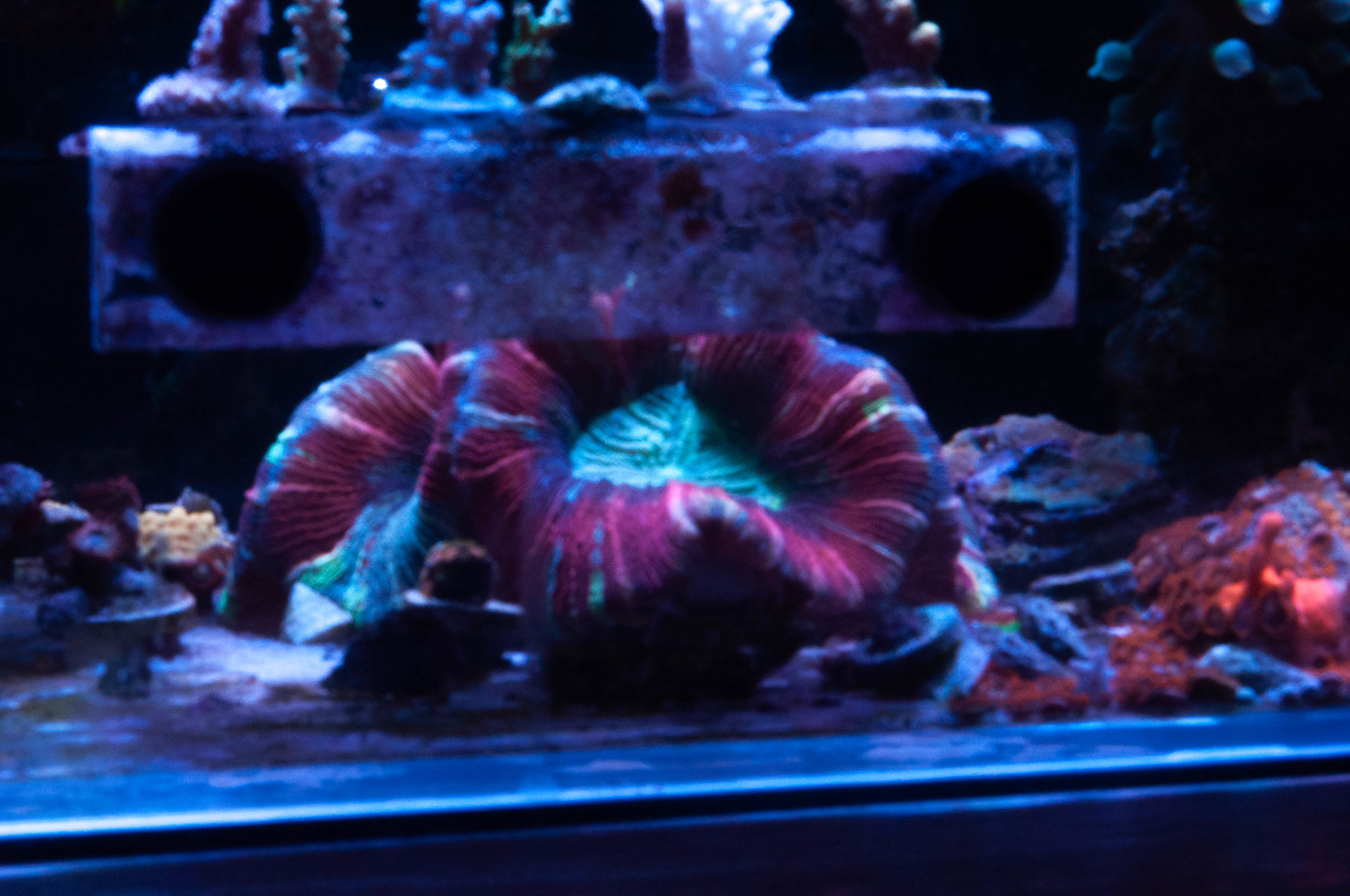 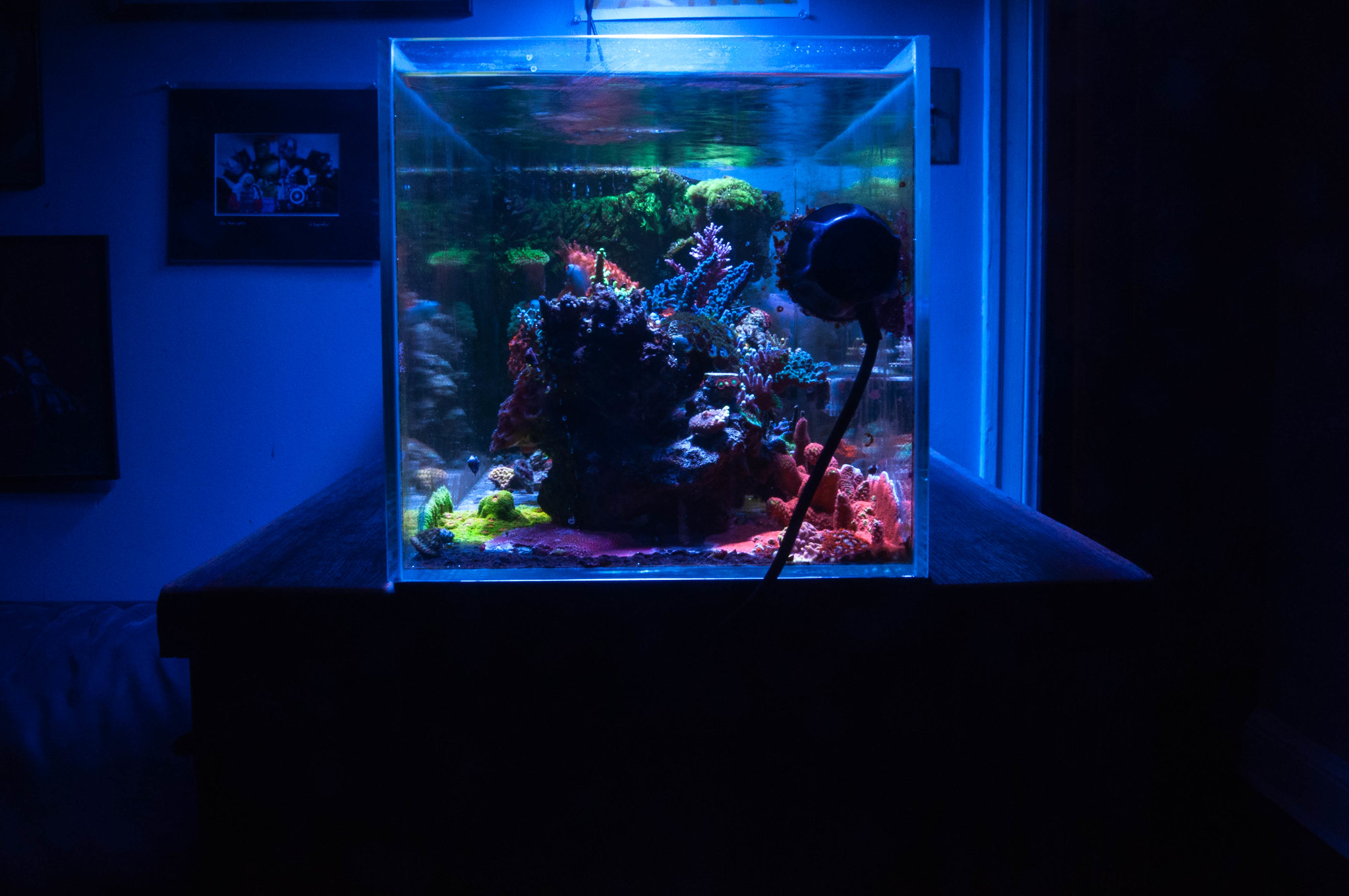 Haha, I was going to say, not a lot has changed, but actually a lot has changed. I'll get some photos up tonight or tomorrow. I picked up a few new SPS pieces, and with the Indo ban, I haven't come across any reasonably priced torches in a hot minute, until last week.

With the eviction of my birdsnest colony on the back, either my alk has spiked with less consumption, or I did a water change a few weeks ago with water that was considerably hotter than my tank, maybe both. I have a Pinky the Bear colony that bleached out, and now I believe is dying, although I swear I still see polyps extending. My Orange Passion is slowly STN'ing/bleaching. I thought it was a lighting issue, so I turned my LED's down by 20%, but have put them back up again about 3 weeks later. I also noticed my heater

the bed, so who knows how long my tank was sitting at about 74F, days, weeks, or months.

All the other SPS is doing fine and showing no signs of stress, so I guess I can't complain to much, especially for a guy that's given up testing because I don't really make any major changes to my tanks schedule.

By the end of the day I'll actually have x2 new QD MP10's, and I'll be setting up a Mr. Aqua 11.4 frag tank with my other MP's currently on the Nano, along with a new finnex heater!

Anyways, lots of words, no photos, I'll get some soon!