There are 3 basic problems a marine fish may experience with their eyes:

This occurs when a fish has a bacterial infection in its eye. The primary symptom is one or both eyes will look cloudy or hazy. Sometimes the eye is also swollen or “popped” out. Eye infections are sometimes due to a preexisting parasitic or worm infestation which is also afflicting the eyes.

If the fish is still eating and otherwise healthy, sometimes an eye infection will self-correct. Especially if the parasites or worms causing the infection are being treated. However, sometimes a fish’s natural immune system needs a helping hand. This can be accomplished in two ways: (a) Food soaking vitamins to boost the immune system. (b) Food soaking or dosing antibiotics to help control the population growth of bacteria in a fish. Two antibiotics which seem especially useful in this situation are Erythromycin and sometimes Minocycline (Maracyn 1 & 2, respectively).

2. Flukes (monogeneans) in the eye

Sometimes skin flukes/monogeneans (especially Neobenedenia sp.) will enter the eyes. You have to look closely to differentiate between eye flukes and eye infection. Flukes can be distinguished as translucent oval looking objects (photos below); whereas an eye infection is oftentimes a single, layered white or hazy “growth” over or under most of the eyeball.

If you suspect that a fish has eye flukes, it is very important to administer a 5 minute freshwater dip before treating with praziquantel. The issue here is that prazi causes flukes to spasm before dropping off, and that reaction can damage a fish’s eyes. So, the freshwater dip will clear flukes from the eyes before using prazi to eliminate whatever flukes remain on the rest of the fish. 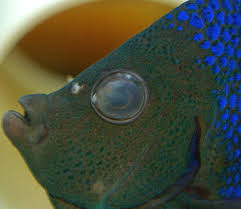 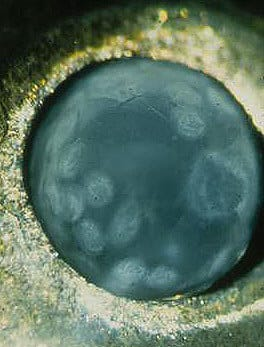 This is more of a condition than an actual disease, usually caused by physical injury or eye trauma. Basically, the fish bumps its head into a rock or damages the eye in some other way. As a result, the area around the eye swells or protrudes. Or sometimes parasites, flukes and/or harmful bacteria can irritate the eye and cause this swelling. Whether or not it self-heals is usually determined by whether or not a pathogen is causing it.

There are a couple of methods you can employ to help reduce the swelling:

(a) Dose Epsom salt @ 1 tablespoon per 5 gallons every other day until eye(s) look normal again. Only use USP (food grade) Epsom salt with NO scents or surfactants added in. Some argue this doesn’t do anything because Epsom salt is just magnesium sulfate, and that is already abundant in seawater. However, anecdotal evidence has proven otherwise – perhaps Epsom salt contains another ingredient which provides efficacy. In any case, it’s not harmful to try it.

(b) If Epsom salt doesn’t work for you, then a little “fish surgery” might be in your future a la @Paul B style. To quote Paul directly:

“Take the fish out, hold him in a net, or have someone else hold him. Stick a hypodermic needle through the stretched tissue near the top of his eye, not in the eye itself and withdraw the plunger on the needle. The eye will immediately retreat and go back where it was last month and the fish will be very happy. I have done that dozens of times and never lost or blinded a patient.” 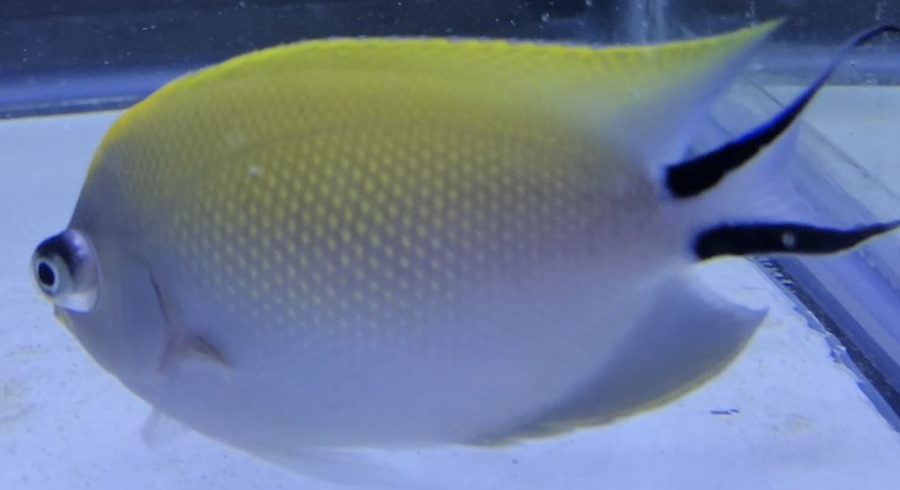 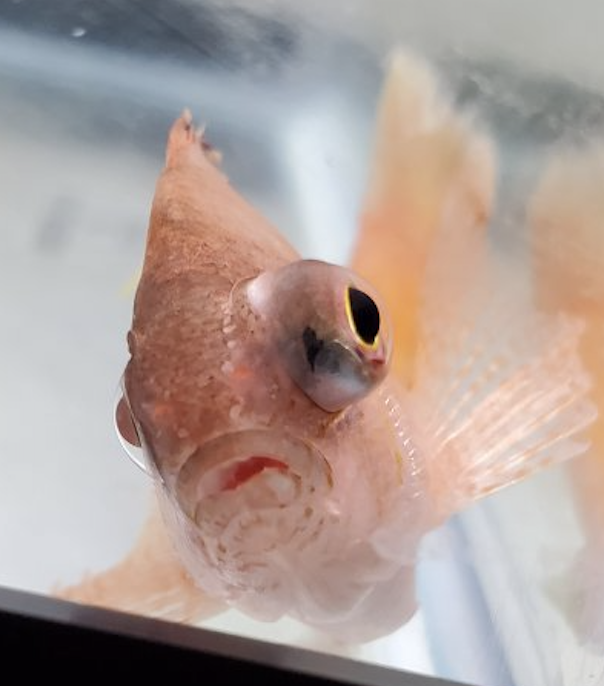